Sadly, the Fanning Island Project has been put on Hold until further notice.

We're keeping our fingers crossed that this special destination will be accessible in the near future, but for now it's on hold.
Tabuaeran, known in English as Fanning Atoll, is one of the Line Islands of the central Pacific Ocean and part of Kiribati. Although it's only an 80-minute flight from Christmas Island, it receives more than double the amount of rainfall--75 inches per year.  Fun fact:  Fanning Island is the picturesque, palm-treed atoll in the closing shot on Gilligan's Island. No kidding! 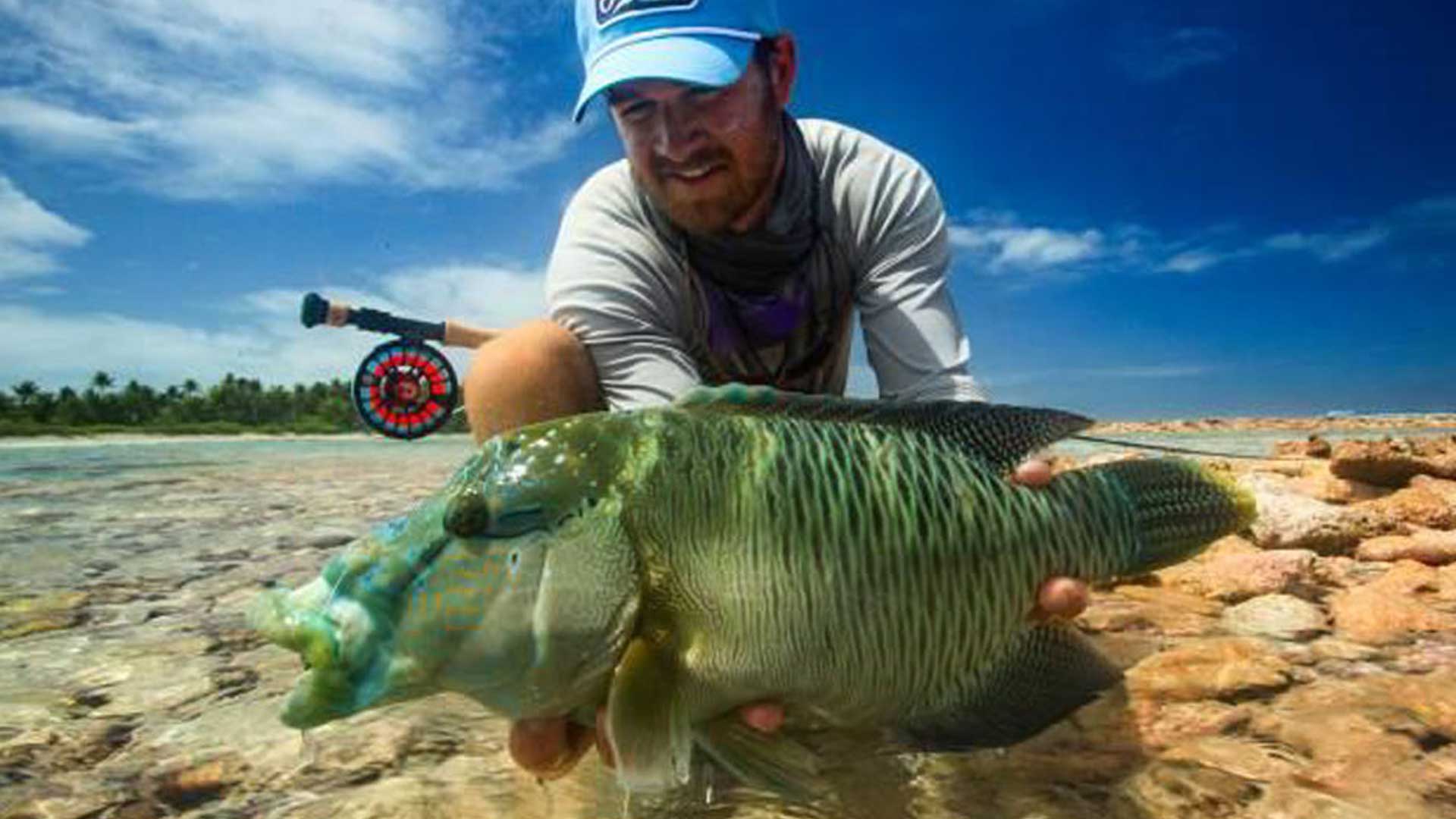 Fanning Island, a new flats fishery in equatorial Pacific, is limited to six anglers per week. The island is locally known as Tabuaeran Island which means heavenly footprint  in the local dialect. Fanning Island, a developing destination, is an exciting trip for adventurous anglers. In 2018, Guy Schoenborn’s hosted group landed three bonefish between 8.5 and 12-pounds. During 2017 exploratory trips, anglers found good numbers of bonefish, with an average size of around 3- to 5-pounds. Each day they also saw larger bonefish from 6- to 8-pounds. Double-digit sized bones are here as well. These monster bonefish readily took flies, but frequently broke 20# leaders and even #2 hooks! The bones are all fat and very healthy.
There are also outstanding numbers of trevally here, including bluefin, golden, striped and plenty of giant trevally. Most are smaller size from 3- to 15-pounds and are perfect for making a quick cast with your bonefish rod when they suddenly appear on the flats. Bigger brutes from 25 to 60-pounds make an appearance most days, exploding up onto the flats in massive pushes of water. These bigger GTs can be targeted on the higher incoming and dropping tides, especially in the areas around the NE Pass and the remote Irapa Wilderness.
2018 reports showed lots of big bonefish and GTs plus Napoleon Wraths and parrotfish. 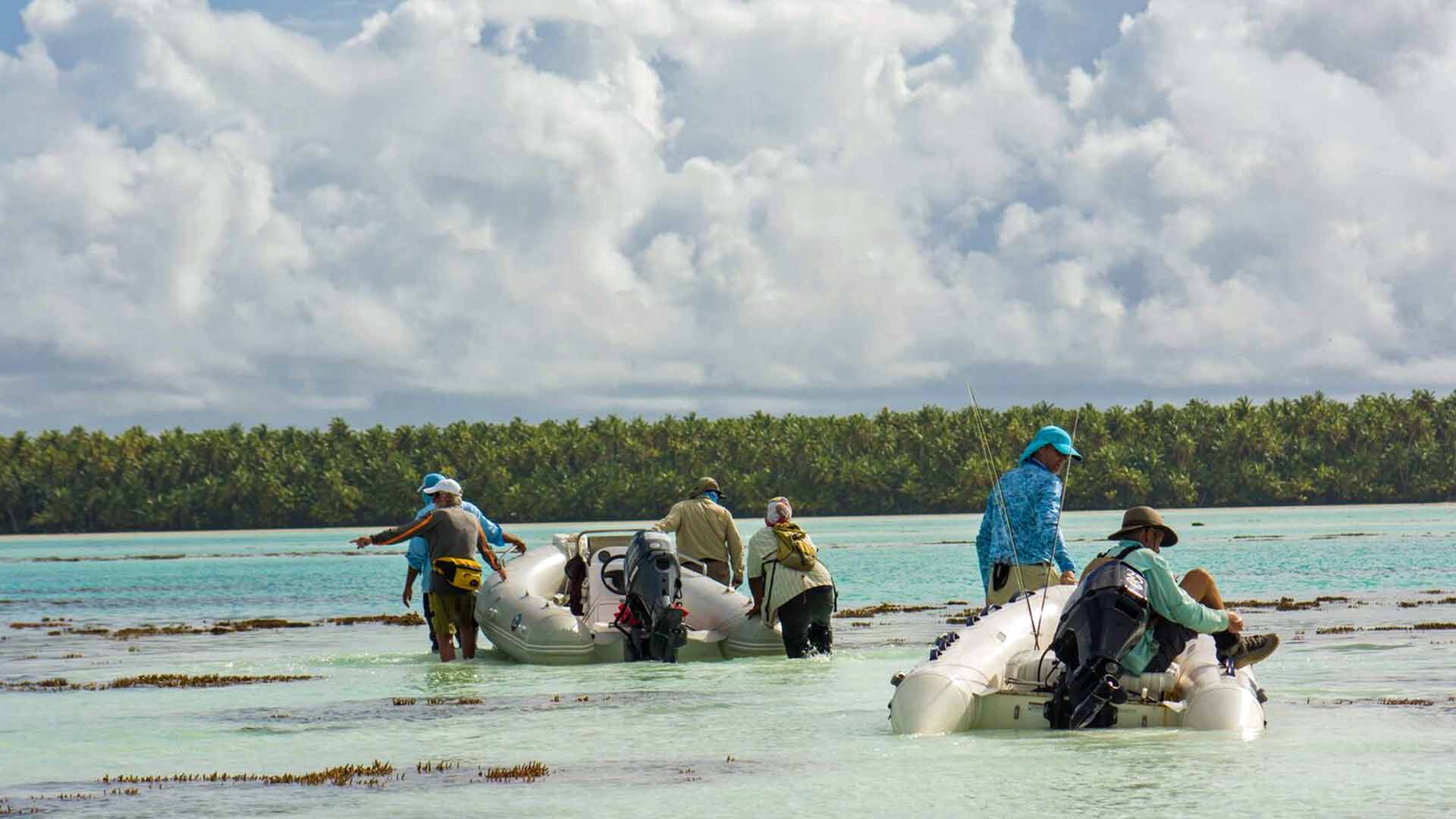 Fishing season:  year-round.
The fishing program is based on two anglers per guide, using 14-foot inflatable Zodiac-style boats with single 25-HP engines. All the fishing is done on foot, hiking the shallow white-sand flats of the lagoon. Most of the fishing grounds are too shallow to access by boat and will require long hikes and a lot of walking. Vast flats and three tidal passes where water feeds into the lagoon from the ocean provide good trolling, blind casting, and wade-fishing opportunities. Some of the flats on Fanning are massive. If the fishing is good, you can spend all day on the same flat.
Group size:  Limited to six anglers per week.
You're guided 8-hours per day. Two anglers per guide.
Guides:  The head guide is Kiritimati (pronounced Christmas). Kiritimati is the brother of the renowned Christmas Island guide, Teannaki. Teannaki taught Kiritimati how to fly fish and how to guide. But, Kiritimati refused to leave his beloved Fanning Island. Now, he is excited to share his island’s flats with fly anglers. Other local guides are being trained.
Tackle:  Fishing tackle is not furnished. FWL will provide you with a complete list of recommended tackle and gear in our confirmation packet.
Fishing license: is not provided, $50.00 payable upon arrival. 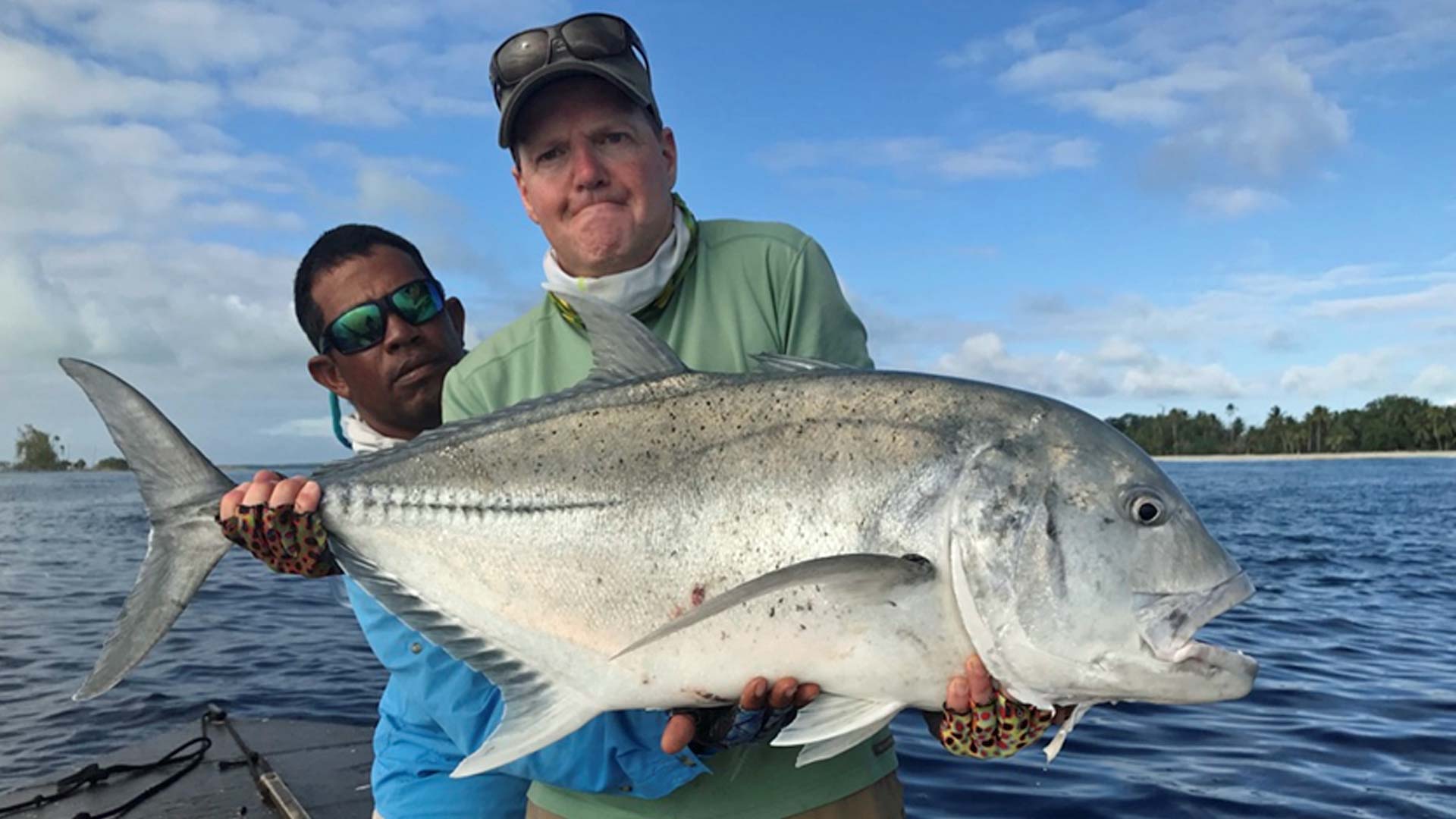 Sample fishing itinerary:
Breakfast is served around 7:00 a.m. After breakfast, you’ll head out for a long fishing day. You'll fish from approximately 8:00 a.m. to 4:30 p.m. and then return to the Lodge around 5:30 p.m. Dinner is around 7:00 p.m. This schedule may change according to your fishing desires and the tides. 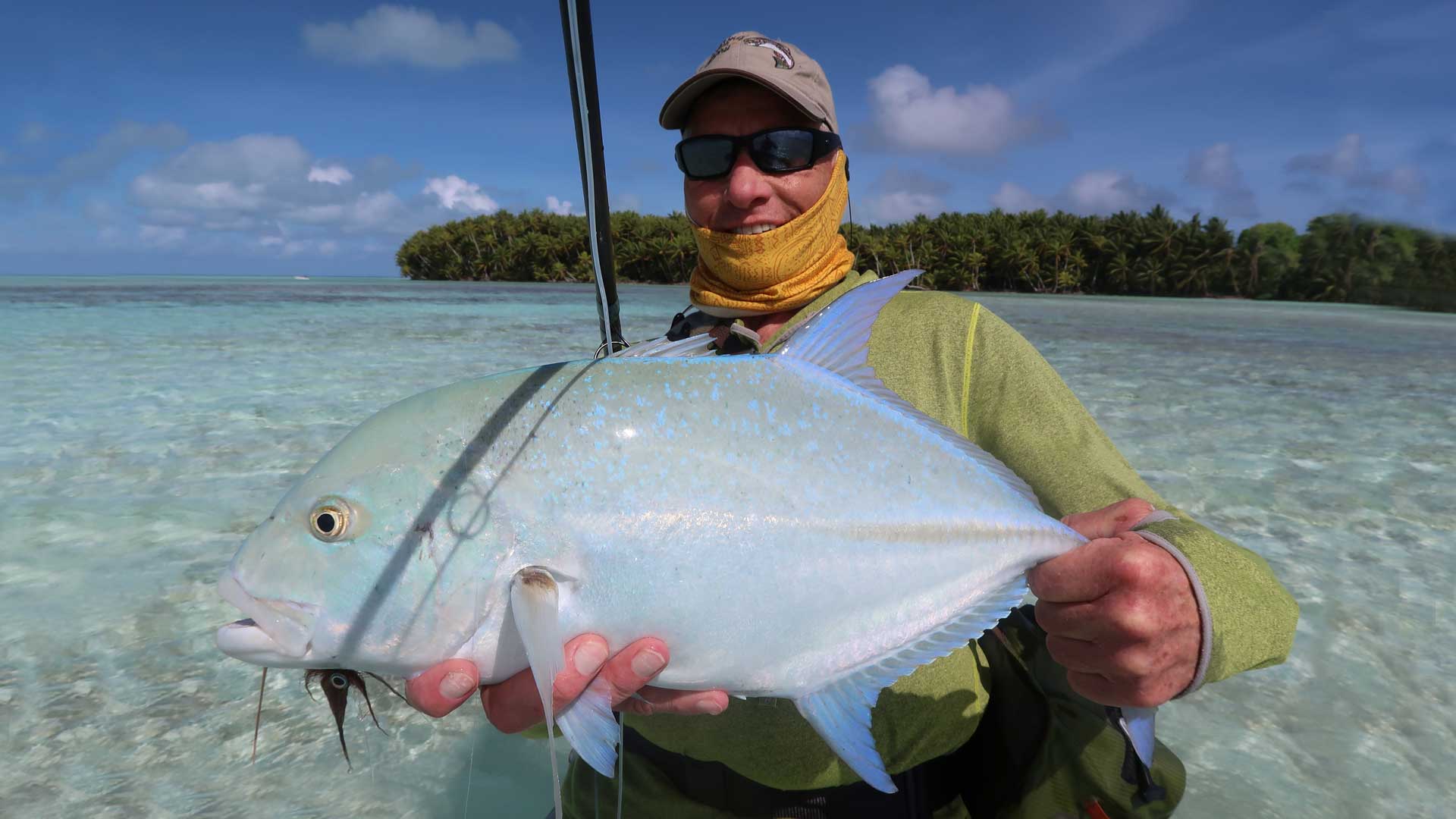 Chuck Ballweg with a very nice bluefin trevally during our 2018 Hosted Week at Fanning Island.

We recommend flying to Honolulu at least one day before your departure for Christmas Island. Weekly flights via Fiji Airlines, depart from Honolulu at noon each Tuesday. The flight to Christmas Island is three hours and 10 minutes.
From Christmas Island, you'll take an 80-minute flight to Fanning aboard a privately chartered Air Kiribati Harbin Y-12. Fanning Island has a 1,200-meter dirt strip on the north side of the atoll. Upon arrival at Fanning, guests will board a flatbed truck at the village of Tereitaki for a short drive to the mouth of the lagoon. The trip is about three miles and will take approximately 20-minutes as the road is not maintained. Here, you'll board a cargo barge and be transported across the English Channel, about a five-minute ride, to the pier at Paelau.

A New Lodge is in the Plans

Pegasus Lodges is building a new lodge for the 2020-2021 season. The Lodge will have eight private, single occupancy, safari-style tent cabins with private ensuite bathrooms. (Each angler will have his/her own tent.) Meals featuring local delicacies—seafood, chicken, pork, eggs, and fruit will be served in the main lodge dining area.
Wi-Fi is not available on Fanning Island.

International airfare, fishing license ($50.00) purchased upon arrival, departure tax ($22.00 - $24.00 USD, may be included in your airfare), alcoholic beverages (including beer), gratuities, travel expenses between your home and Christmas Island, Global Rescue, travel insurance, and anything not mentioned under inclusions.

With a local population of around 2,000 residents and eight small villages connected by a dirt path, travel is limited to bicycles, motorbikes, small boats, and a handful of old flatbed trucks. The beautiful inner lagoon is loaded with bonefish, trevally, and countless other species of fish that have never seen an artificial fly. There are also 30 miles of outside reefs providing exciting angling opportunities as well as world-class surfing. 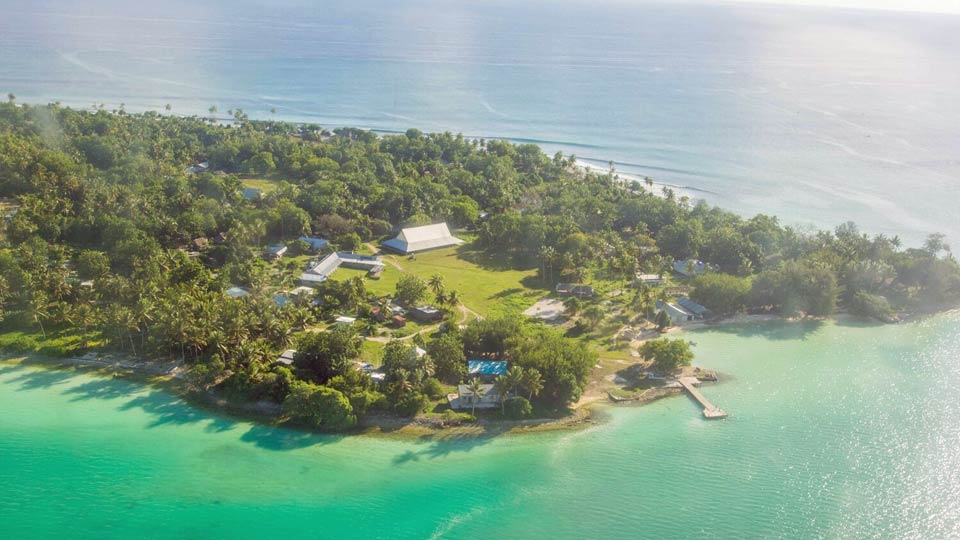 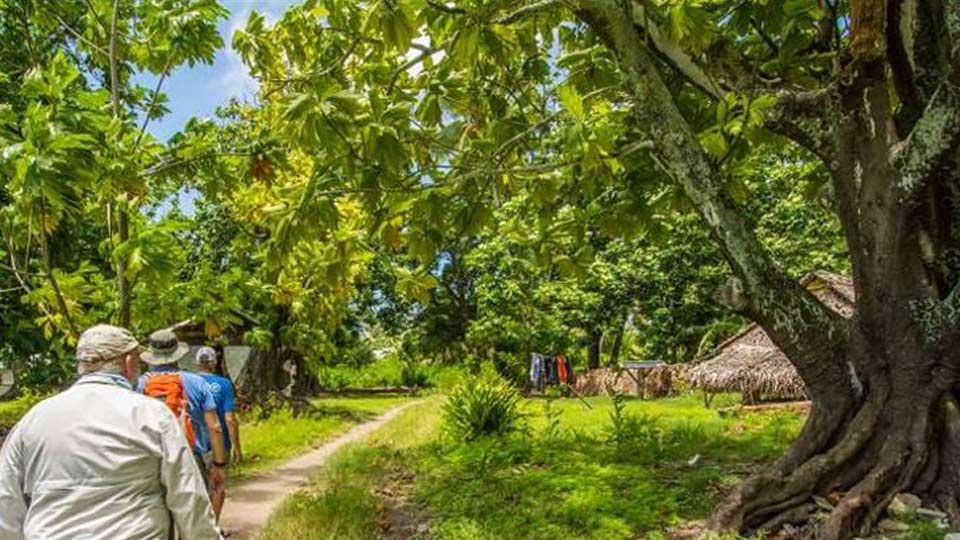 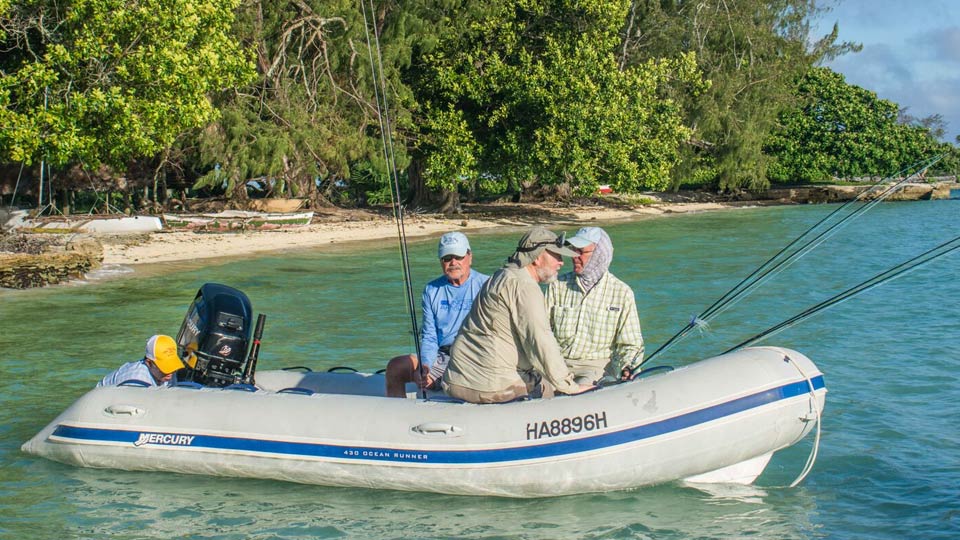 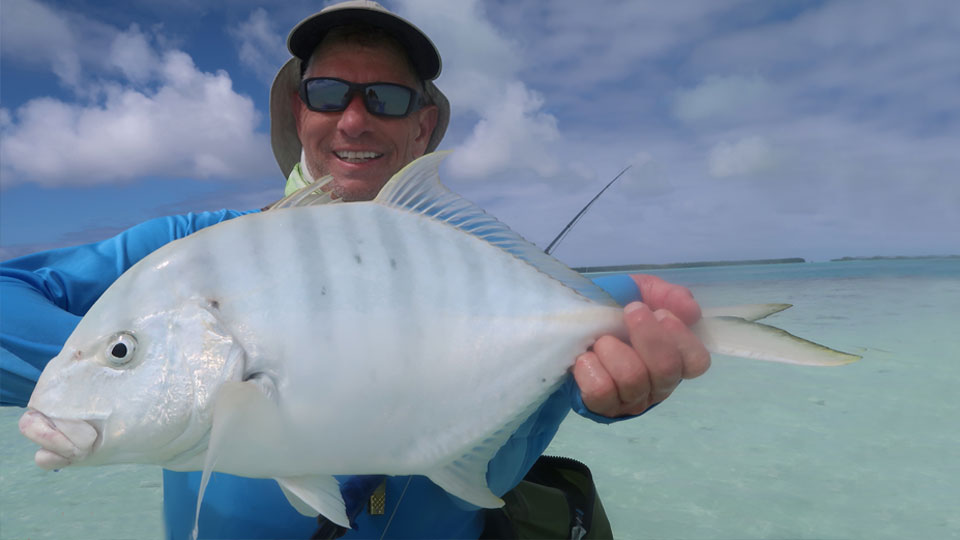 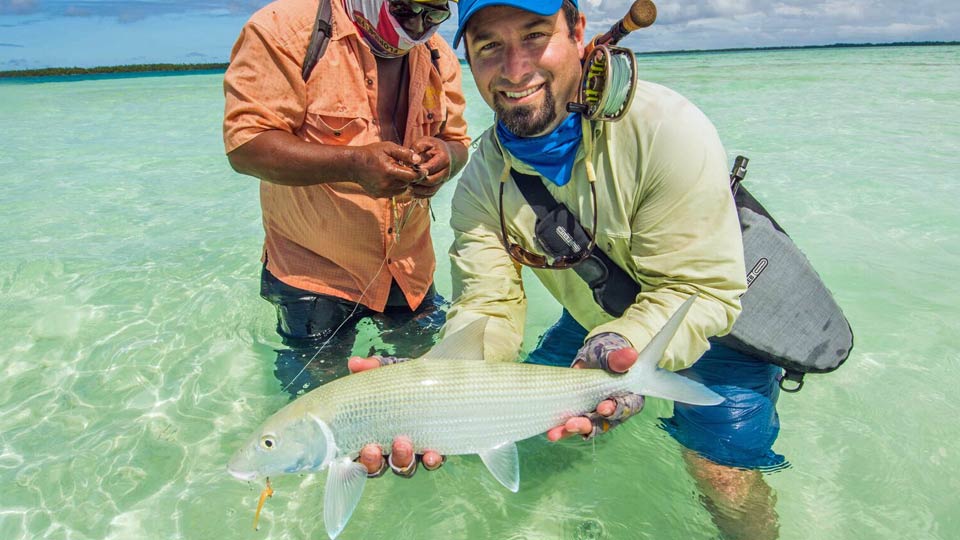