This January, I hosted my second peacock bass fishing trip at Itapará Lodge in the remote Amazon jungle of Brazil. Most anglers will hook many fish per day with a chance at a peacock bass over 20 pounds! Thanks to my good client Stu Peterson and his girlfriend Lori, we had four couples for this trip, plus myself. 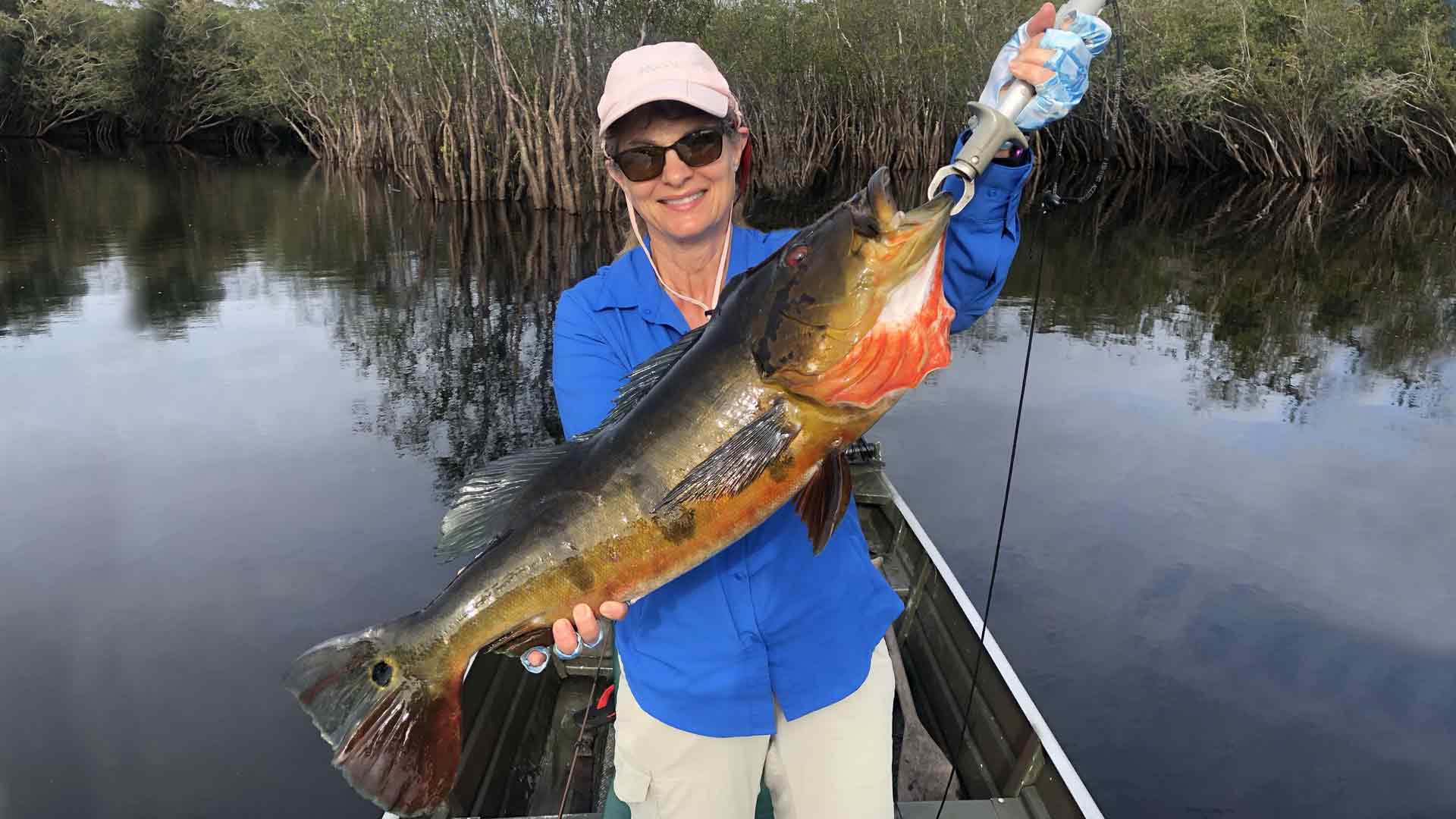 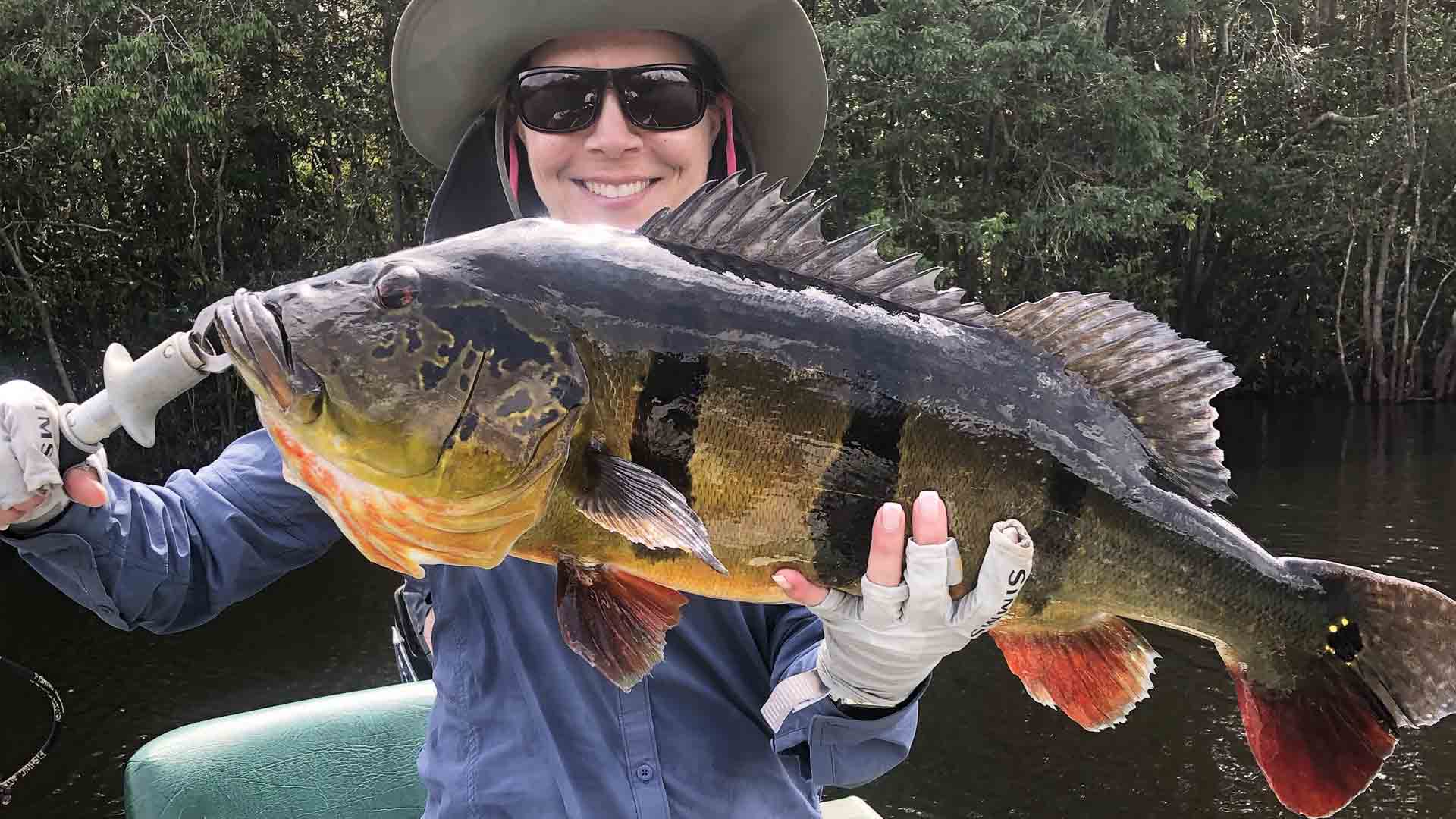 On Thursday evening, January 16th, we took a five-hour flight on American Airlines from Miami, Florida, to Manaus, Brazil. We arrived early the next morning at 1:30 a.m. Manaus International Airport has recently been updated and is very nice. The arrival and departure process went smoothly. After getting our bags and clearing customs, we were greeted by Wagner, our driver. He drove us to the Blue Tree Premium Hotel in Manaus. The reservations were made for us by our Travel Agent-Partner, Kevin Martin, from Martin Travel Services.

When possible, I like to arrive a day early at my international destinations. If my checked luggage does not make it on the same flight that I'm on, hopefully, the bags will arrive on the next flight in time for me to get my gear and continue to the Lodge. Also, for most of us, traveling all day from different parts of the States, it's nice to acclimate, and take a break before departing to the Lodge. On Friday, we slept in, had a late breakfast at the hotel, and then in the afternoon, Wagner took us on a short tour of Manaus. Two of the more interesting stops were the open-air fish market that had many Amazon Basin fish species and the famous Manaus Opera House, with Renaissance architecture. Wagner had a translator join us, a pleasant woman who works in the tour business.

The next morning at 6:00 a.m., Wagner met our group at our hotel and drove us to the regional airport, about a 15-minute drive. We boarded a 12-passenger plane for the 90-minute flight to Itapará Lodge, 250 miles north of Manaus. From the windows in the plane, we viewed the Amazon rainforest. Trees, rivers, and water—as far as the eye can see. At about 9:00 a.m., we landed on the Lodge’s paved airstrip, where we were greeted by Marcello, the lodge owner, and his friendly staff. The Lodge is well-maintained and is very clean. The bedrooms are good-sized with private bathrooms, and air conditioning is available. The main Lodge accommodates up to 18 anglers and has free Wi-Fi.

We settled into our rooms, had a hearty breakfast, and then rigged up our fishing rods. Itapará Lodge welcomes both fly and lure anglers. My clients fished the Itapará River with lures while I fished with flies. Because each couple had their own boat, I was the odd man out this trip and fished alone with my guide.

Most of the fishing guides have worked at Itapará Lodge for many years. The guides do not speak much English, but they’ll point out where you should cast, are quick at tying fishing knots, getting your lures and flies out of the trees when you make a bad cast. The guides are expert boat handlers, know what lures and flies work best, and where the peacocks live.

You'll fish two anglers per 17' aluminum boat with Mercury 25 HP engine. The boats have plenty of room, comfortable seats, and are safe to stand up in while fishing. The guides also use electric trolling motors, getting you close to the structure where the peacocks are hunting for their next meal. The guides try to spread the boats out, so the peacocks have not seen lures or flies for a few days.

During this hosted week, the water was about three feet above where it should’ve been for January. Fishing was tough the first afternoon for almost everyone, but after that, it improved. Like most fishing trips, some days were better than others. Most of the peacocks were 2 to 3-pounds. We had multiple fish that were over 5-pounds and a good number of fish that were 10-pounds and above. This trip, the largest peacock landed was about 15 pounds. This area has had normal water levels for several years, and there are very good numbers of peacocks that are 3-to 5-pounds. In the next year or two, the guides expect there to be many peacocks in the high teens and lower 20s.

No equipment or tackle is provided. Rod and reel rentals are available. If you are a lure angler, plan on bringing about eighteen various peacock bass lures. Jigs, flies, Rapala diving lures (or other similar brands), sub-surface lures, topwater lures like Zara Spooks, and topwater propeller lures all work very well. When I host at Itapará Lodge, I can supply fishing equipment for up to eight anglers, if needed.

Our group stayed for the 4 ½-day guided fishing package. Itapará also offers a 9 ½-day package. During our stay, our group landed a lot of nice peacock bass up to 15 pounds plus other species. In the Itapará River, we mainly target peacock bass, but there are also bi-cuda, piranha, and other species. Stu caught a 90-pound arapaima on a medium-heavy rod that he was using for peacocks. The arapaima jumped close to the boat six times! Stu said, “The battle was like, catching a large sturgeon on a trout rod.”

Each day, we fished until late in the afternoon and returned to the Lodge before dark. After we freshened up, it was time for appetizers and drinks on the deck. All alcoholic beverages are included in the packages, and drinks are available at the lodge anytime until 10:00 p.m. Family-style dinners consist of chicken, beef, pork, fish, vegetables, potatoes, rice, etc. and delicious desserts.

While my hosted group decided to stay at the main Lodge for the duration of our trip, there is the option of fishing Itapará's lower Lodge that is 40 miles downriver, about a two-hour non-stop boat ride. For most packages, anglers usually fish at the main Lodge for a few days and then spend the day fishing their way downstream to the lower Lodge. The lower Lodge hosts up to eight anglers, and there is no Wi-Fi or air-conditioning. During our trip, there were five anglers from Brazil that were also staying at the Lodge, and they went to the lower Lodge for two days. Their fishing was very similar to ours. As it is, Itapará's main Lodge is very remote, a five-hour boat ride to the closest village. During our stay, we did not see any other anglers that were not from Itapará Lodge.

During our trip in January, the weather was very pleasant and not hot. We did get a few rain showers in the late afternoon, which is typical for the tropics. There are many species of birds and plenty of caiman swimming around (but no issues with the caiman). Some anglers saw howler monkeys and otters. We didn’t have a problem with insects, except there were some flies buzzing around for a couple of days while fishing, and at dusk on the deck before dinner if there wasn't a breeze, the small no-see-ums could prove irritating.

Itapará River Lodge’s season begins in October as the water levels continue to drop from the rainy season. Most years, the Lodge stays open until mid-March. I have fished in the past at other destinations in Brazil for peacock bass, and this destination is unique. Itapará River Lodge is one of just a few fixed lodges in the Rio Negro River system. Due to its remoteness, there should not be many other anglers fishing in the area. If you choose to fish for 4 ½ days or the 9 ½ day package, there is the option of fishing from both of the two lodges; and there are good numbers of peacocks at each location. A 20-pound trophy is just one cast away!


Please contact me with questions that you may have about this special fishing trip.

The Fish Market in Manaus

I was told at the market that peacock bass and arapaima are raised for commercial harvest. The rolled-up fish are arapaima. 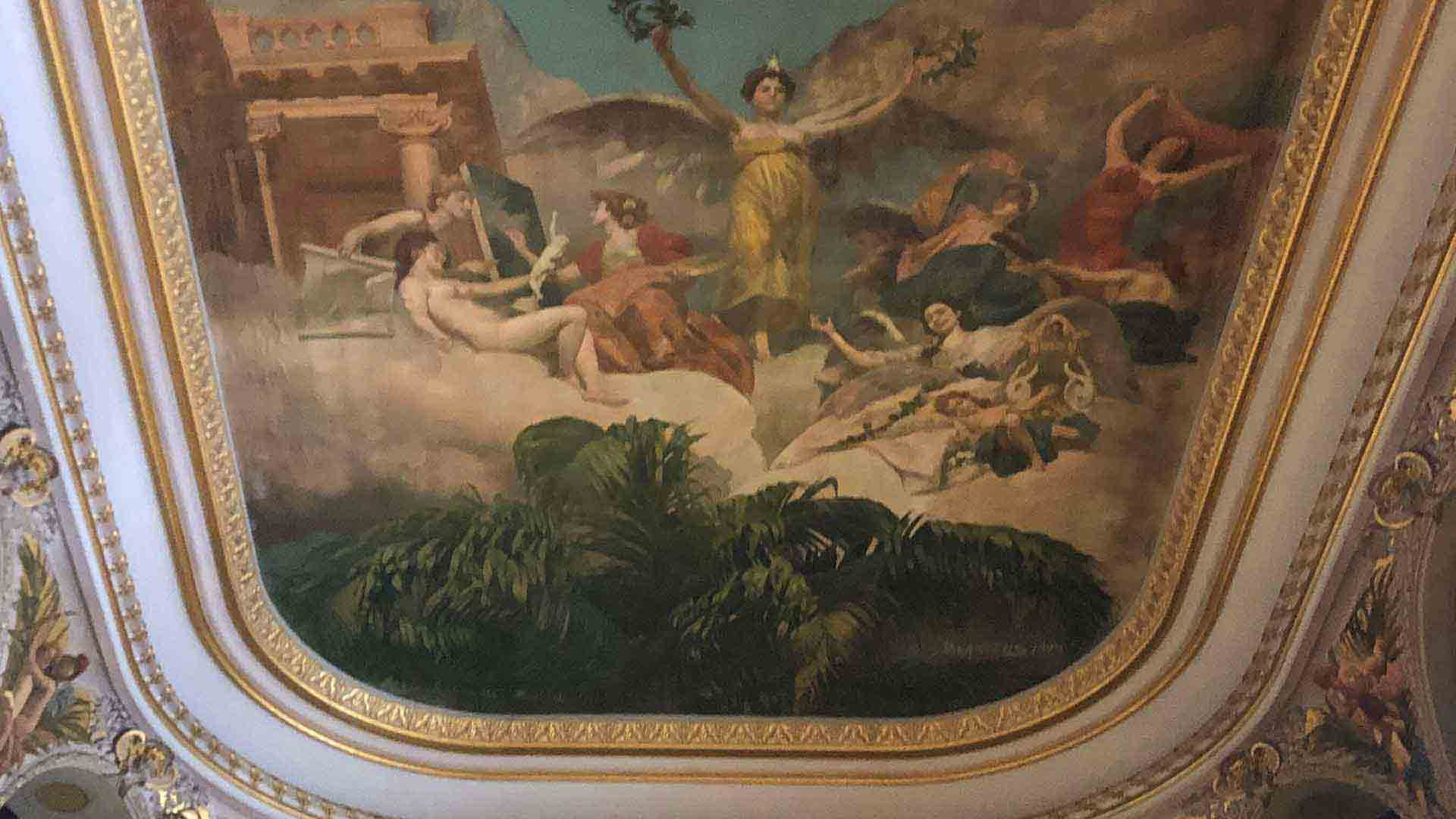 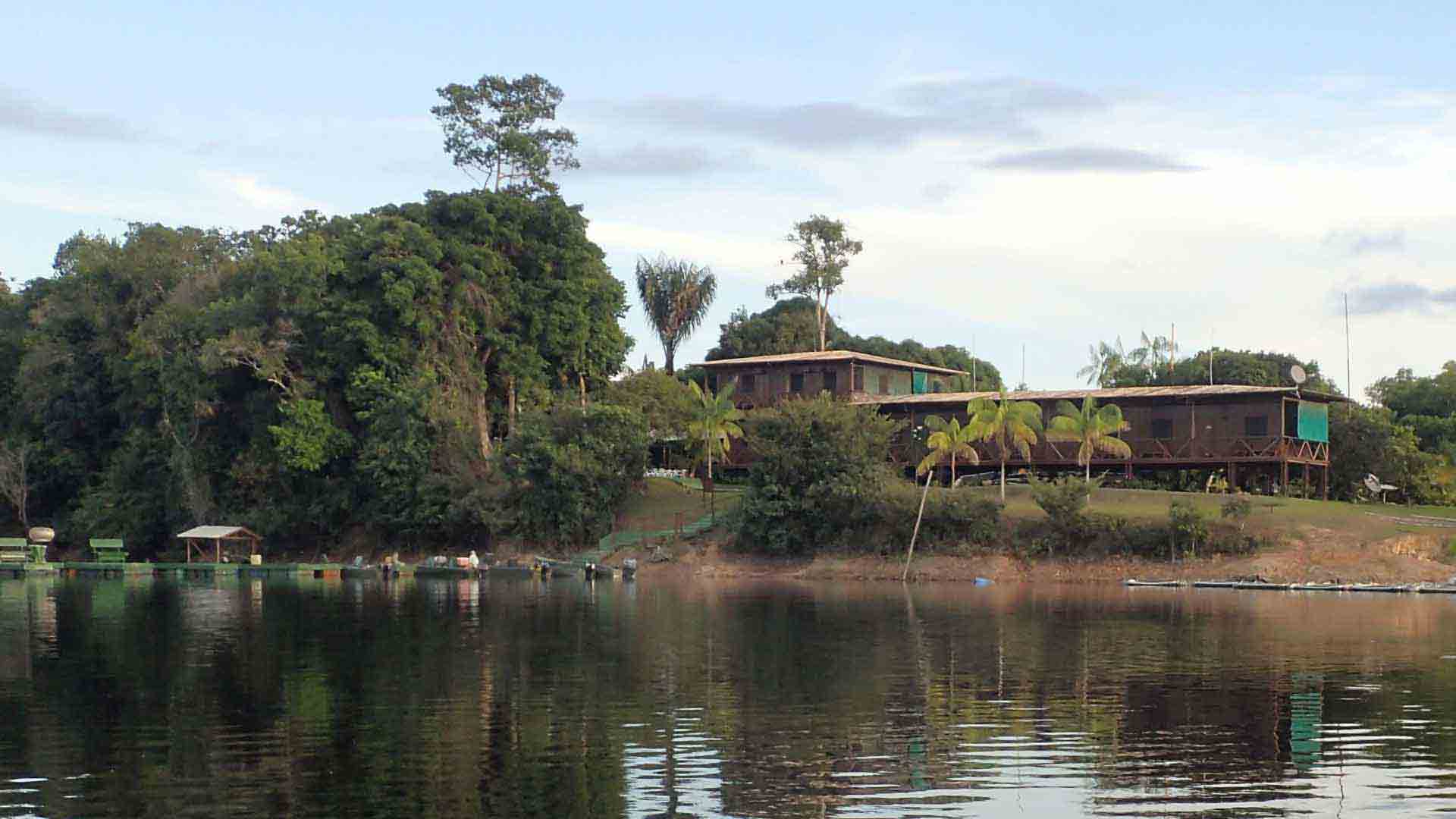 Bedroom and ensuite bathroom with shower 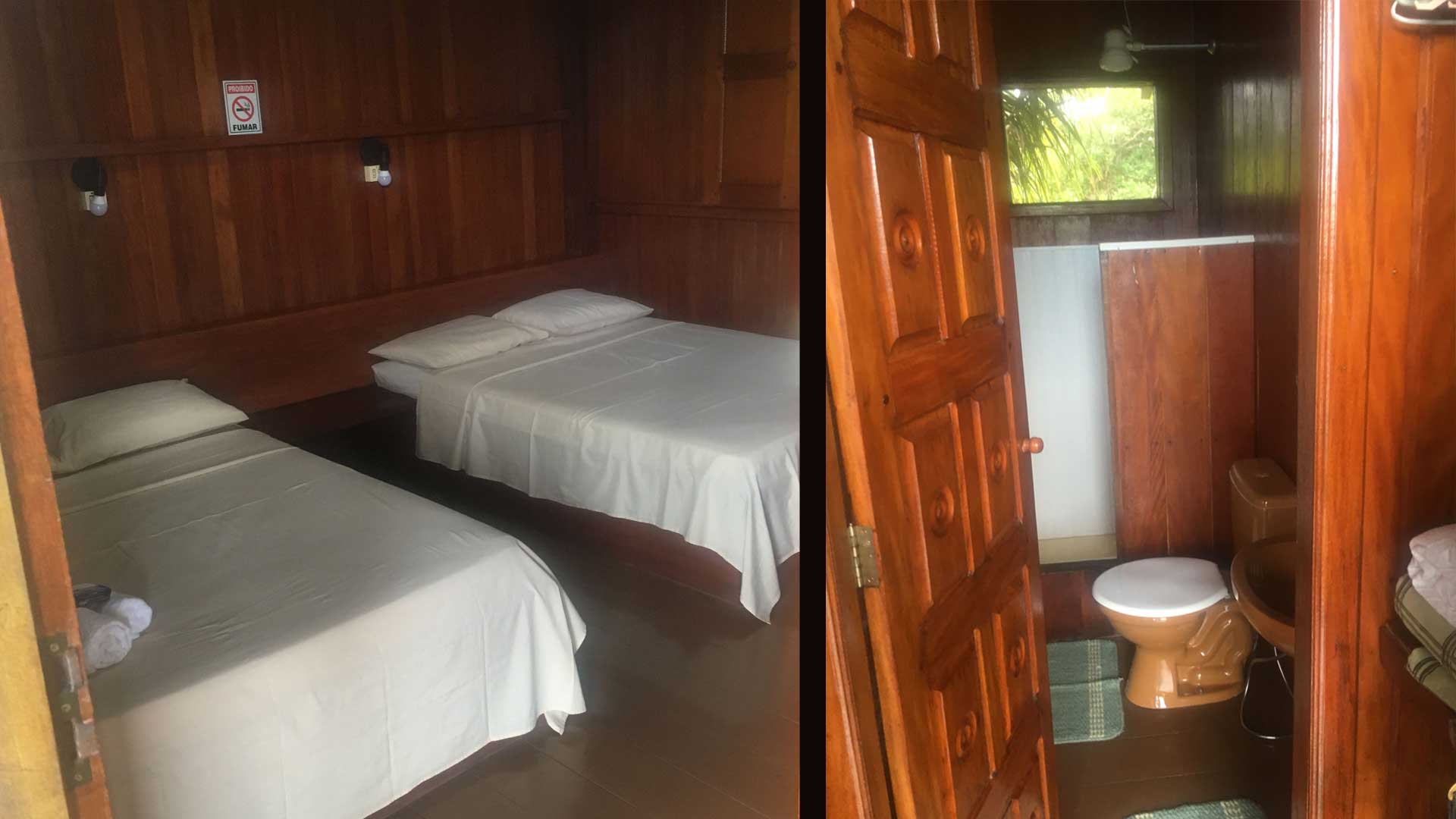 Stairs down to the boat dock from the Lodge 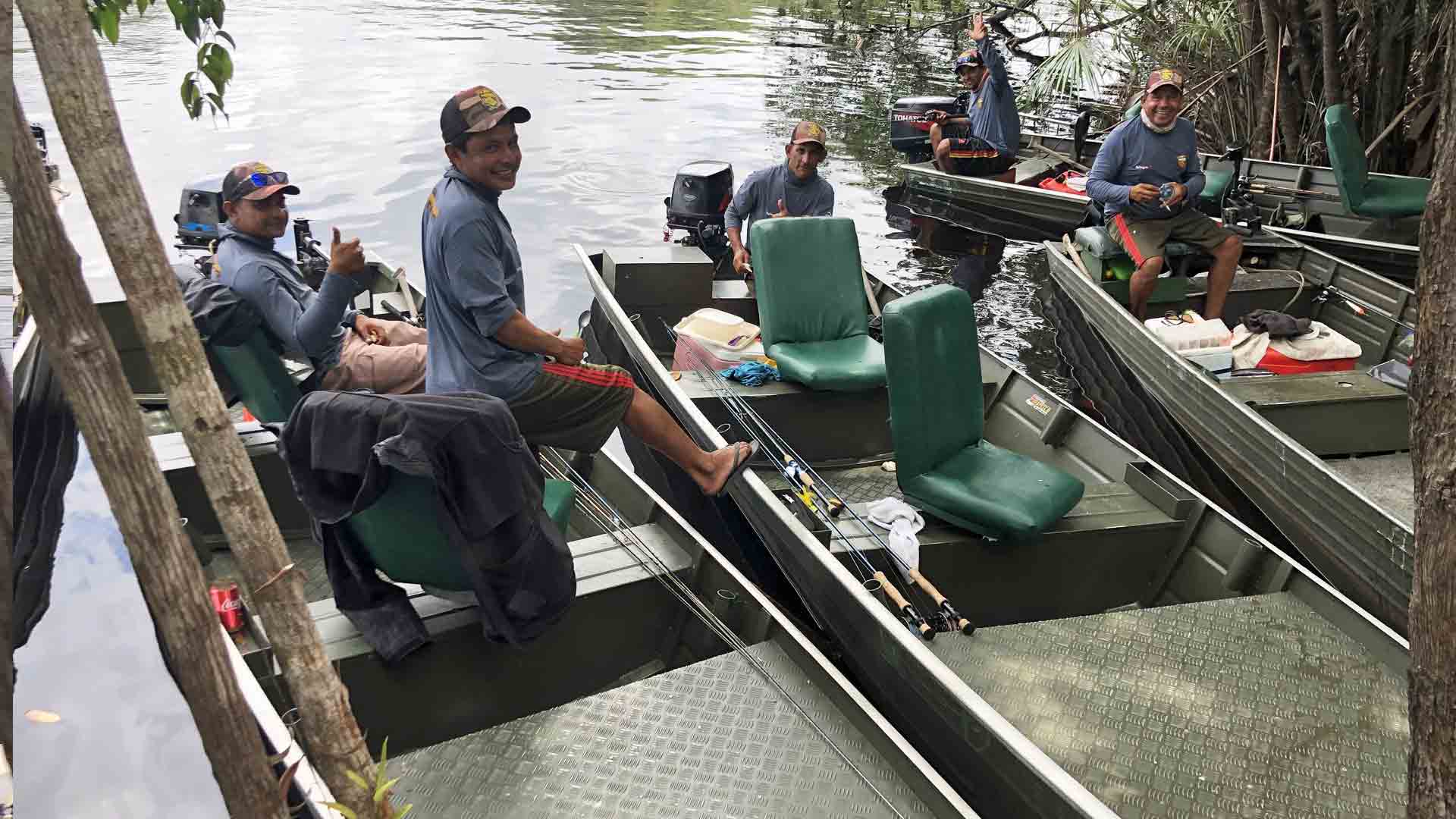 Patty with another nice peacock bass 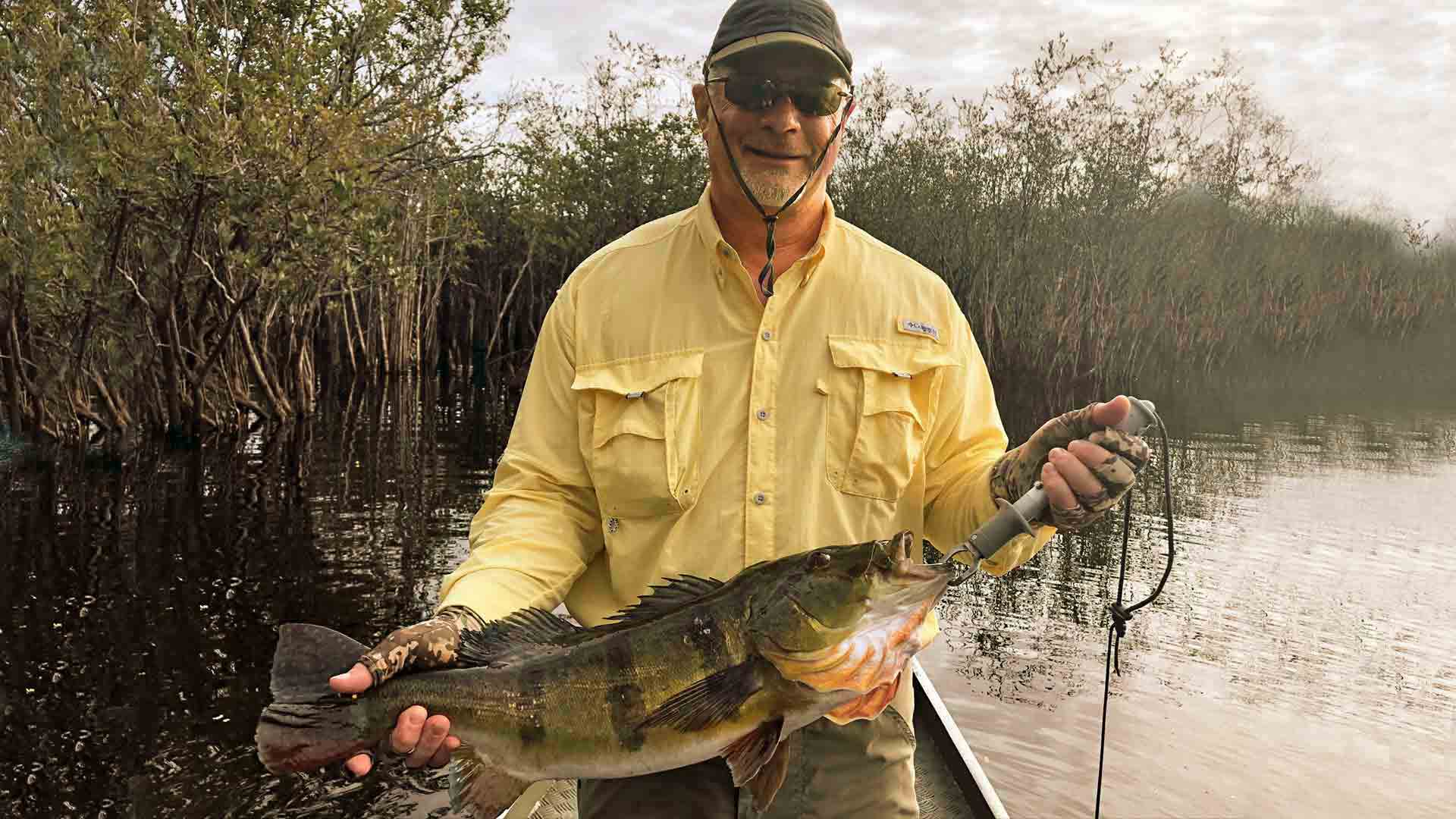 Dining room at the main Lodge 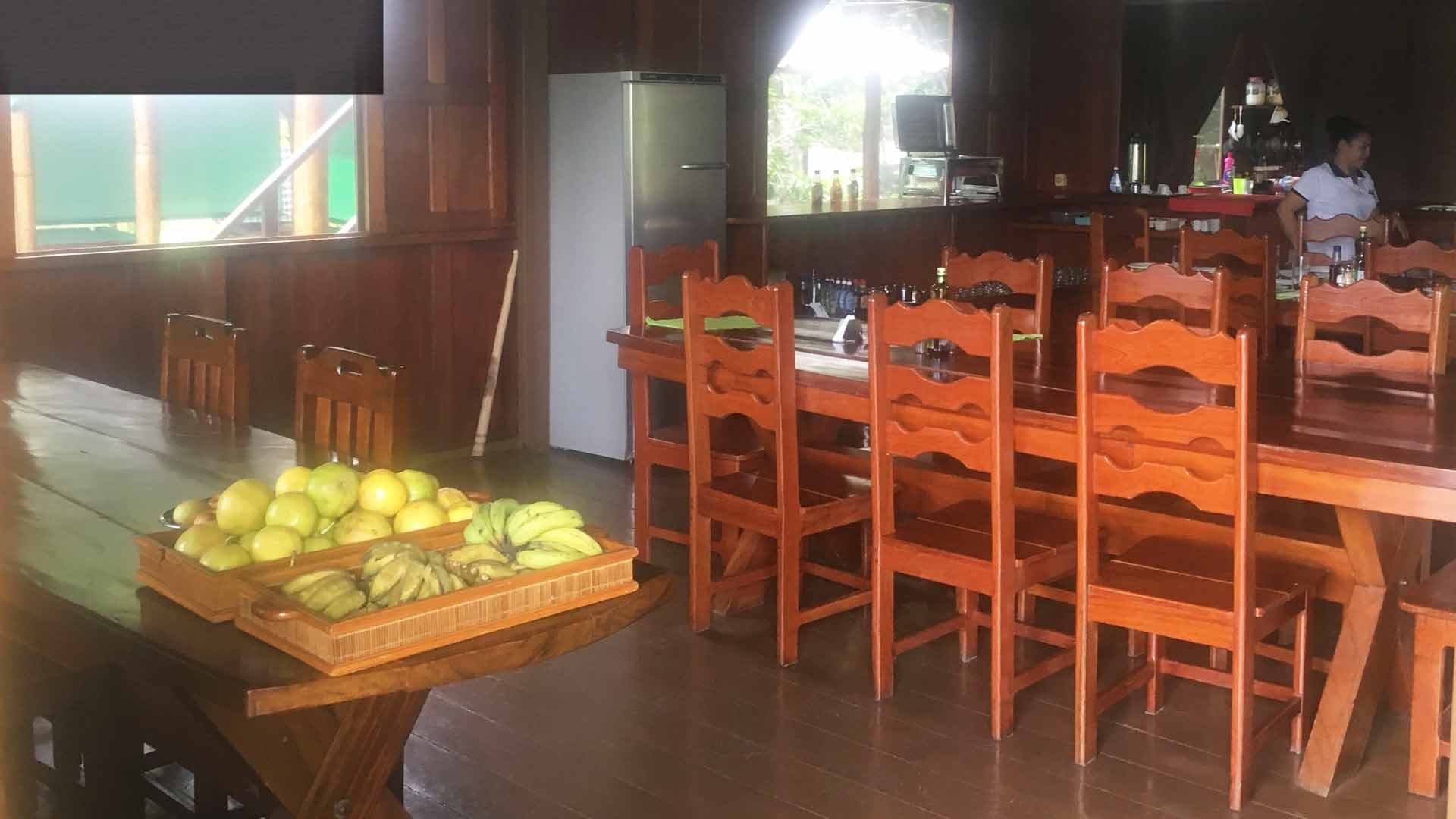 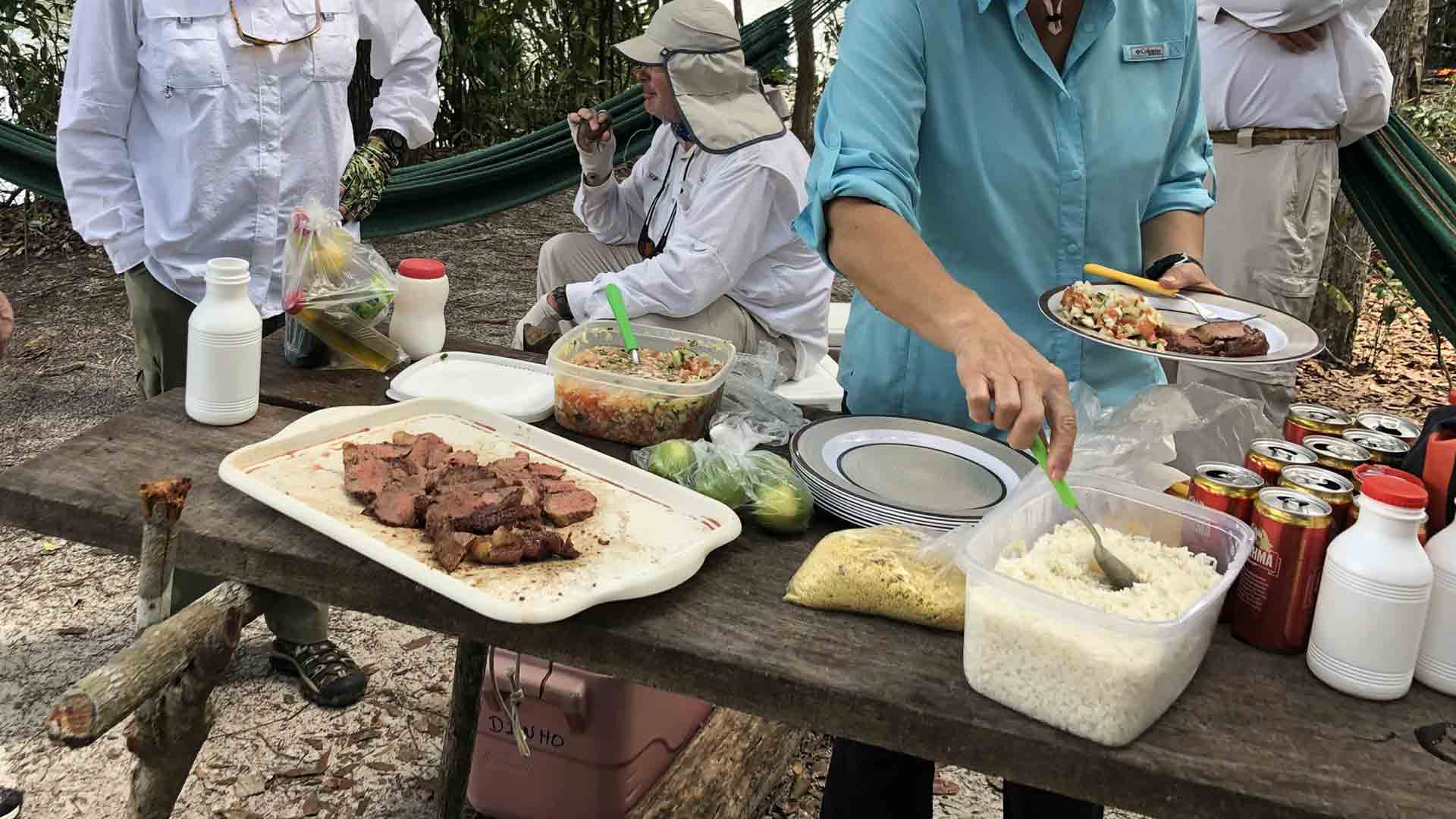 I often fly fish barefoot, so I don't step on my line. - Brad 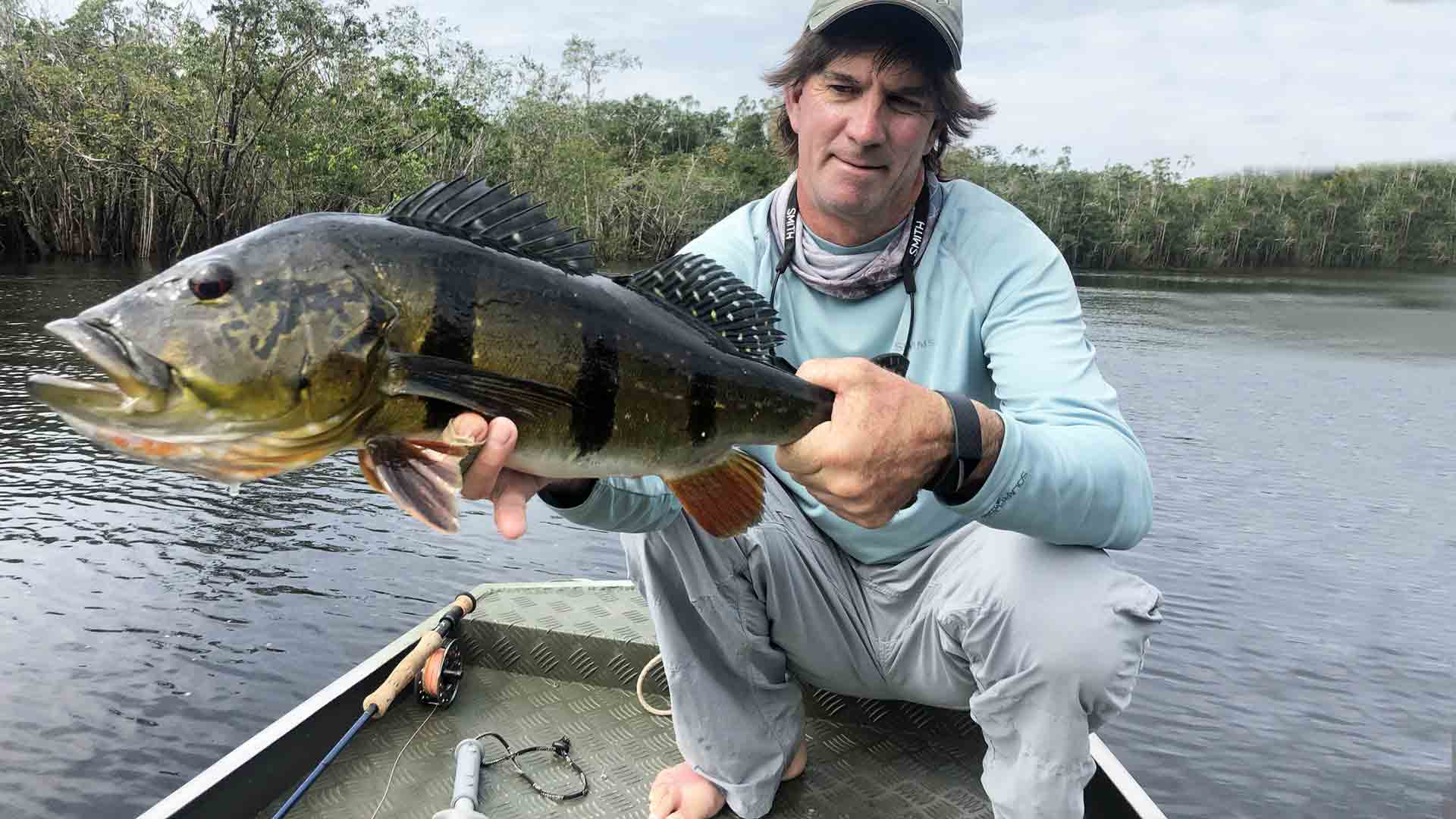 In the video below, I'd hooked an average-sized Peacock bass, and it swam into a brush pile, and I could not get it out. I was about to break it off, when my guide “Cosme” got his facemask out of his storage box. I don’t speak Portuguese, and he doesn't understand English. So, I tried to tell him not to jump in after it, but he still did. After diving down, he returned to the surface for a breath or two, and then the next time up with my Peacock!

This is what you call SERVICE.
Brad Staples and guide. 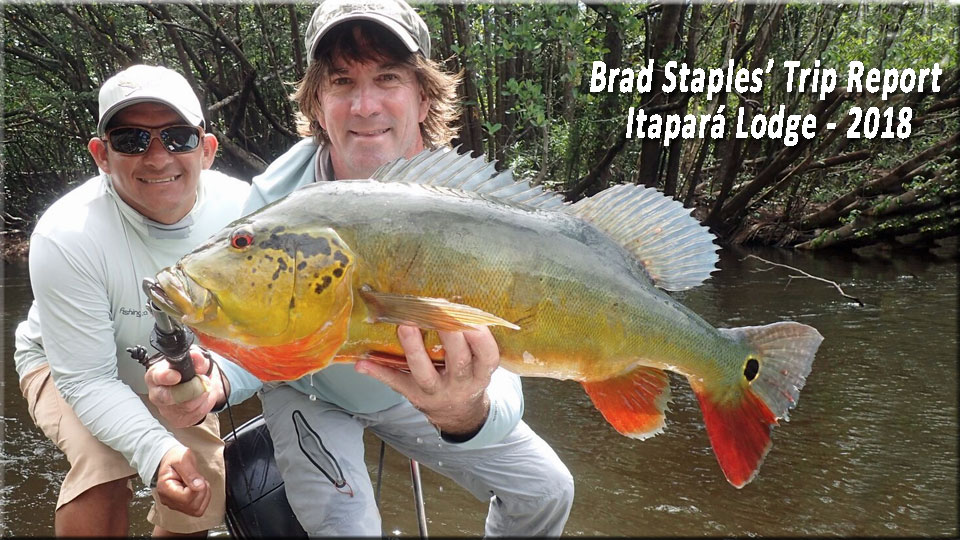 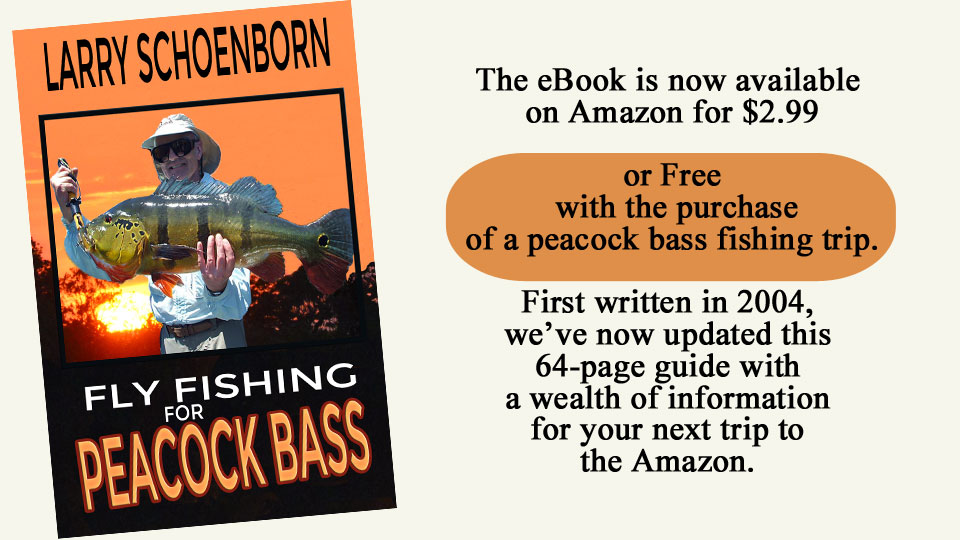