The #1 Fishing Destination in North America - Field and Stream magazine, 2006.
For over 60 years, Plummer's has provided some of the best lake trout, Arctic char, and grayling fishing in the world. Both fly and spin anglers are welcome. Five lodges in all, and four have their own airstrip. Book now for 2023 and 2024. 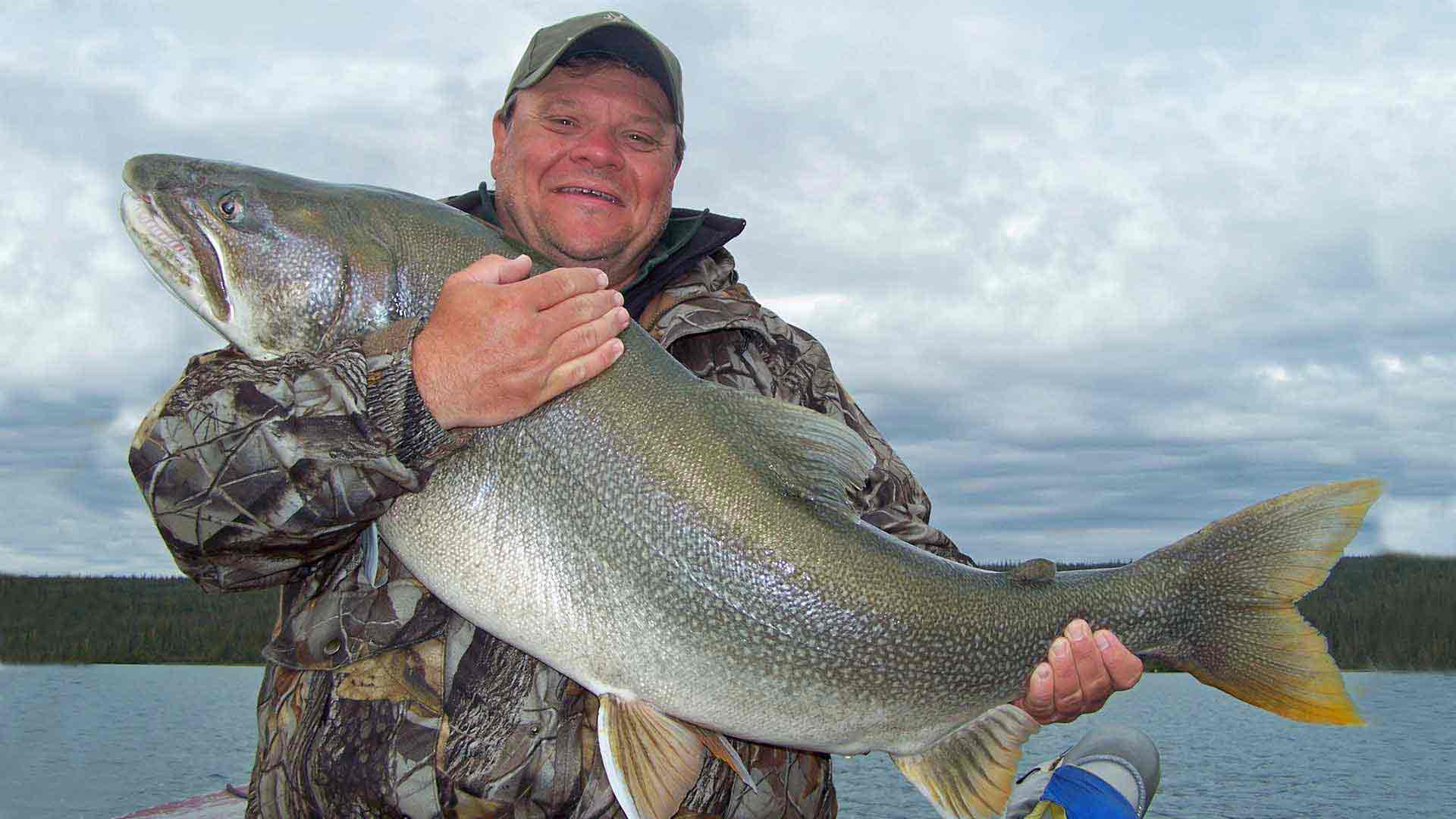 Great Bear Lake:  On the edge of the tree line and hundreds of miles from civilization, Great Bear is the fourth-largest lake in North America and is fished by only 300 lucky anglers each year. Great Bear boasts the All-Tackle World Records for both trout and grayling, as well as dozens of line-class records.
• Plummer's two turbine Otters are stationed at Great Bear's 5,600 ft. airstrip, making it their only lodge that offers daily fly-outs (an added fee).
• Great Bear is also the only lodge that offers anglers access to Arctic char fishing at the world-famous Tree River.

(The following does not apply for Plummer's Arctic Circle DIY Lodge.)
Guides:  Plummer’s employs about 50 guides, ranging from rookies to 30 years of experience. All guides have current First Aid and Pleasure Craft Operator Cards.
Methods:  Single barbless hooks only; all fishing is catch-and-release except for fish retained for the shore lunch. Be ready for action on lightweight rods for grayling. Cast sinking tips with your 8-weight into gin-clear bays for 10- to 20-pound lake trout. Rip just about anything across the surface of the water for some vicious Northern pike. Work the 8-weight and your legs for the infamous Arctic char on a side trip to the Tree River or Coppermine River.
Boats:  18' Lund boats with 40-HP Mercury four-stroke motors and GPS sonar move anglers from place to place.
Fishing Equipment:  Spin and bait casting rods and reels are available. Flies and lures are not supplied. A detailed list of what to bring is in our confirmation packet.
Fishing Licenses:  are not included. A non-resident license is about $100.00 CND.
Meals:  Meals at the Lodges include hot breakfasts served at 7:30 a.m., daily shore lunches, and hearty dinners at 7:30 p.m.
Alcohol:  Alcohol is available at the Lodge for an additional fee. In 2022, beer was $8.00, shots $10.00, and wine was $10.00 per glass. Great Slave Lake Lodge and Great Bear Lake Lodge both have fully stocked bars. 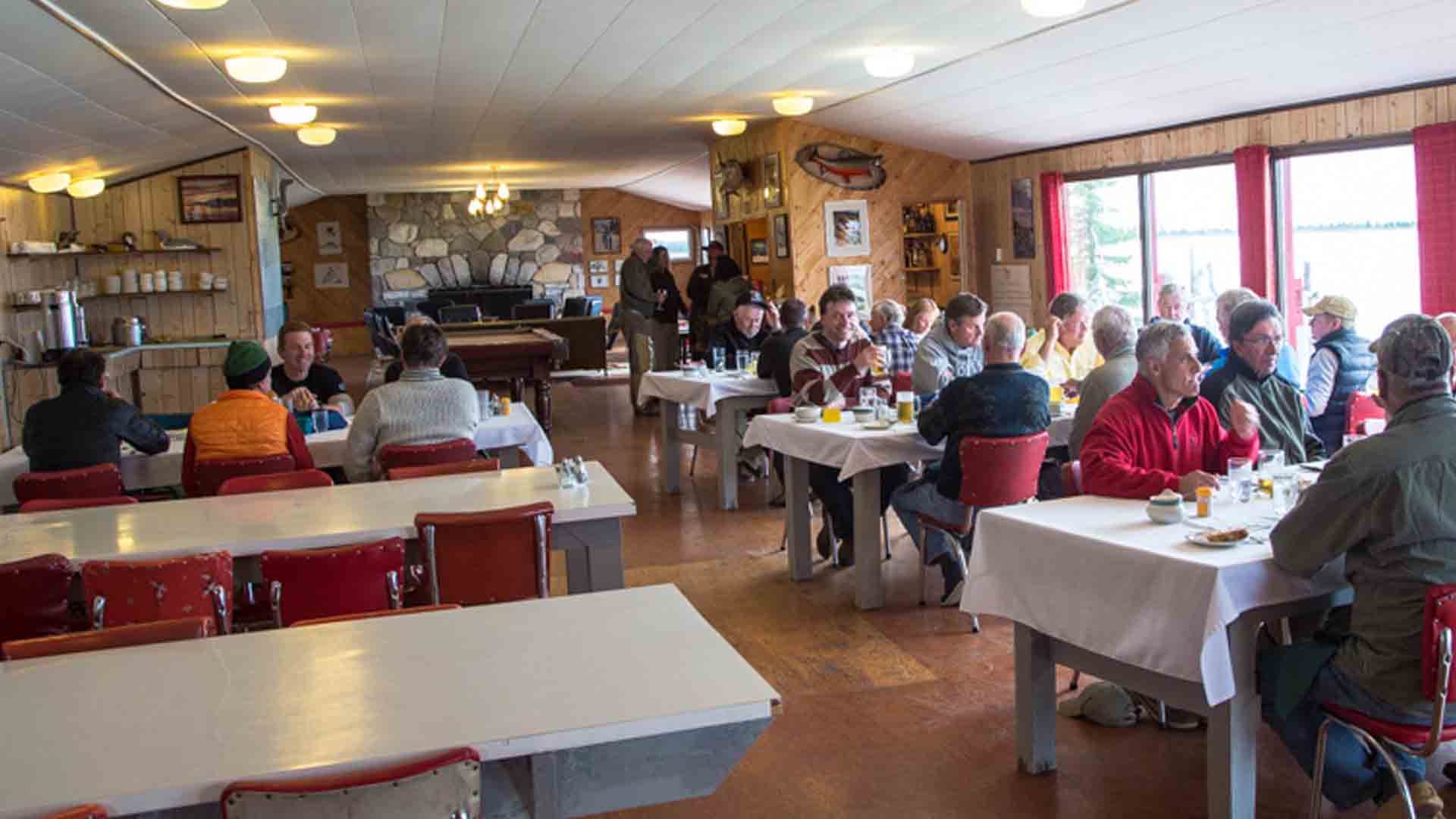 Great Bear Lake Lodge accommodates up to 44 guests. The cabins accommodate up to eight guests and have a full bath, electric, oil, or wood heat, and 24-hour electricity. The main lodge features a tackle shop, a large dining room, and a lounge with a pool table, fireplace, fully stocked bar, and an onsite masseuse. The Lodge has a satellite phone, free Wi-Fi, and meeting facilities with audio and visual presentation equipment. A Red Seal chef prepares your meals.
2023 Rate for Great Bear Lake Lodge:
7-nights and 6.5-days guided fishing
$7,095.00 per person, plus 5% tax.
Getting to Great Bear Lake Lodge:  From Yellowknife, you'll take a 90-minute charter flight mid-morning, arriving at Great Bear's private 5,600 ft. airstrip. You'll then take a three-minute boat ride to the Lodge. 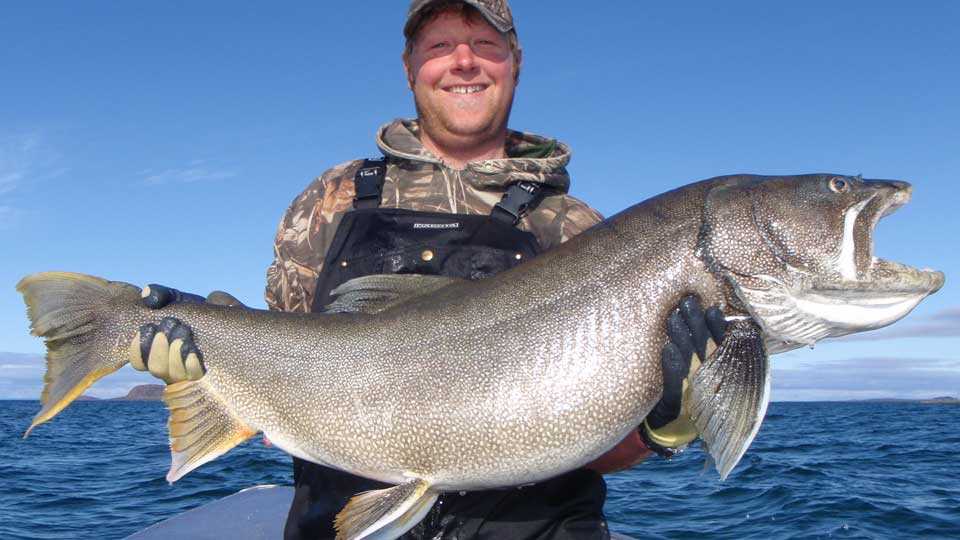 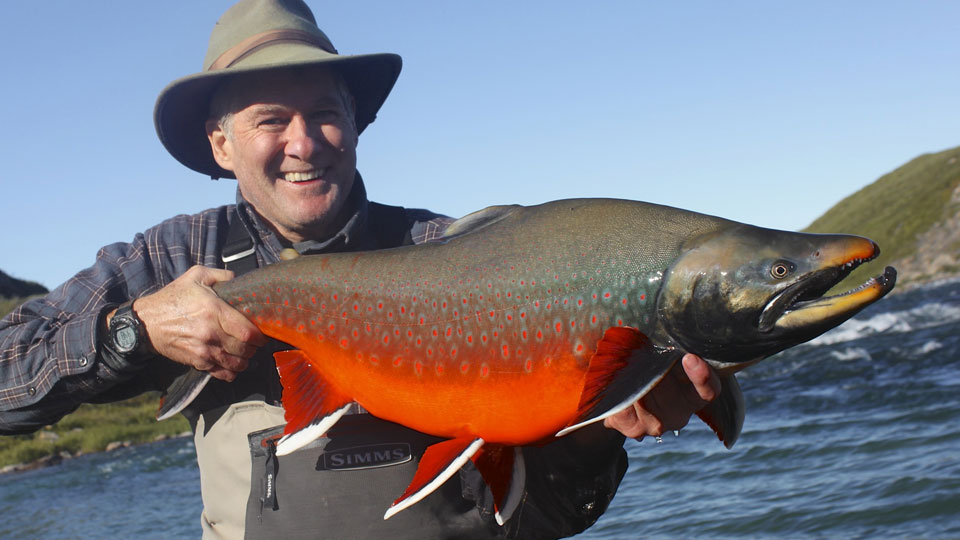 The Tree River is only four miles from the Arctic Ocean and is known for its trophy Arctic char, including the world record a 32-pounder. Each year several dozen char are caught in the 20-pound range. Many guests have regarded the Tree River as a life-changing experience.
You'll fly or spin fish from shore; both are successful. Anglers will hike to several of the pools.
Tree River Camp, Home of World Record Char
• A Fly-out excursion like no other
• An oasis in the Arctic
• Rugged and beautiful
• Book an overnight stay from Great Bear Lake Lodge or a one-week trip from Great Bear Lake Lodge; only one week is offered per year, and they sell fast.

Tree River Camp: The rustic camp hosts twelve anglers. Canvas-roofed cabins sleep four. Oil heat and 24-hour electricity. Home-style meals with fresh bread and baked goods.
Plummer's will make every effort to ensure that your trip proceeds on schedule, but due to the proximity of the Arctic Ocean, weather delays are common, and Plummer's cannot be held responsible for any extra costs incurred due to uncooperative weather.
2023 Rate for Tree River Lodge:  Tree River overnight side trip
from Great Bear Lake Lodge
$1,400.00 per person, plus 5% tax.
7-nights and 5-days guided fishing
Tree River Lodge $8,495.00 per person, plus 5% tax.
This one-week package is sold-out until 2028! Sadly, it's only offered for one week per season. So if you would like to book 5-years out, here is the run-down:
On a Saturday in late August, you'll take a 90-minute flight from Yellowknife to Plummer's private airstrip on Great Bear Lake, weather permitting. That afternoon, you'll take a one-hour and 45-minute floatplane flight to Tree River. For the next four days, chase Arctic Char at the peak of their colored-up phase. On Thursday, you'll take the floatplane back to Great Bear Lake Lodge. You'll fish Great Bear Lake all day on Friday and then fly back to Yellowknife on Saturday morning.
Call for availability.

"Our group split up, heading upstream from camp on both sides of the river. This late in the year, most of the char were in the upper part, which was the portion with the high-velocity flows and torturous rapids. The water was getting increasingly turbid, making pockets of water more difficult to detect.
We finally got to the point where we had to guess where there might be good holding water for fish and then fish these areas with intense focus. I had worked my way upriver for nearly two miles with no sightings of fish or any strikes. I tried both pixie spoons and flies, continuously changing patterns that might finally attract that monster char.
I was nearly up to what is known as the second waterfall, a 4-6 foot drop. The char typically pool up below this barrier, so we focused on this area. My buddy, Jim, hooked the first char of the trip in a tiny pocket of water behind a rock. The fish took a silver and chartreuse fly. As soon as that fish was released, he immediately hooked into a second fish that was slightly larger. Both fish were silver females that were 10 and 12 pounds, respectively.
After helping photograph Jim’s char, I moved up to the next pocket of water. To this point I'd had no luck, no strikes, no follows, nothing. I kept changing patterns and noticed the water continued to lose clarity. I finally selected the brightest pattern in my box, a solid chartreuse streamer. I made the first cast and had my first follow, a large char with a large head, but it was such a fast follow, I could not gauge the size of the fish.
Click here for Mike's article, a five-page PDF. 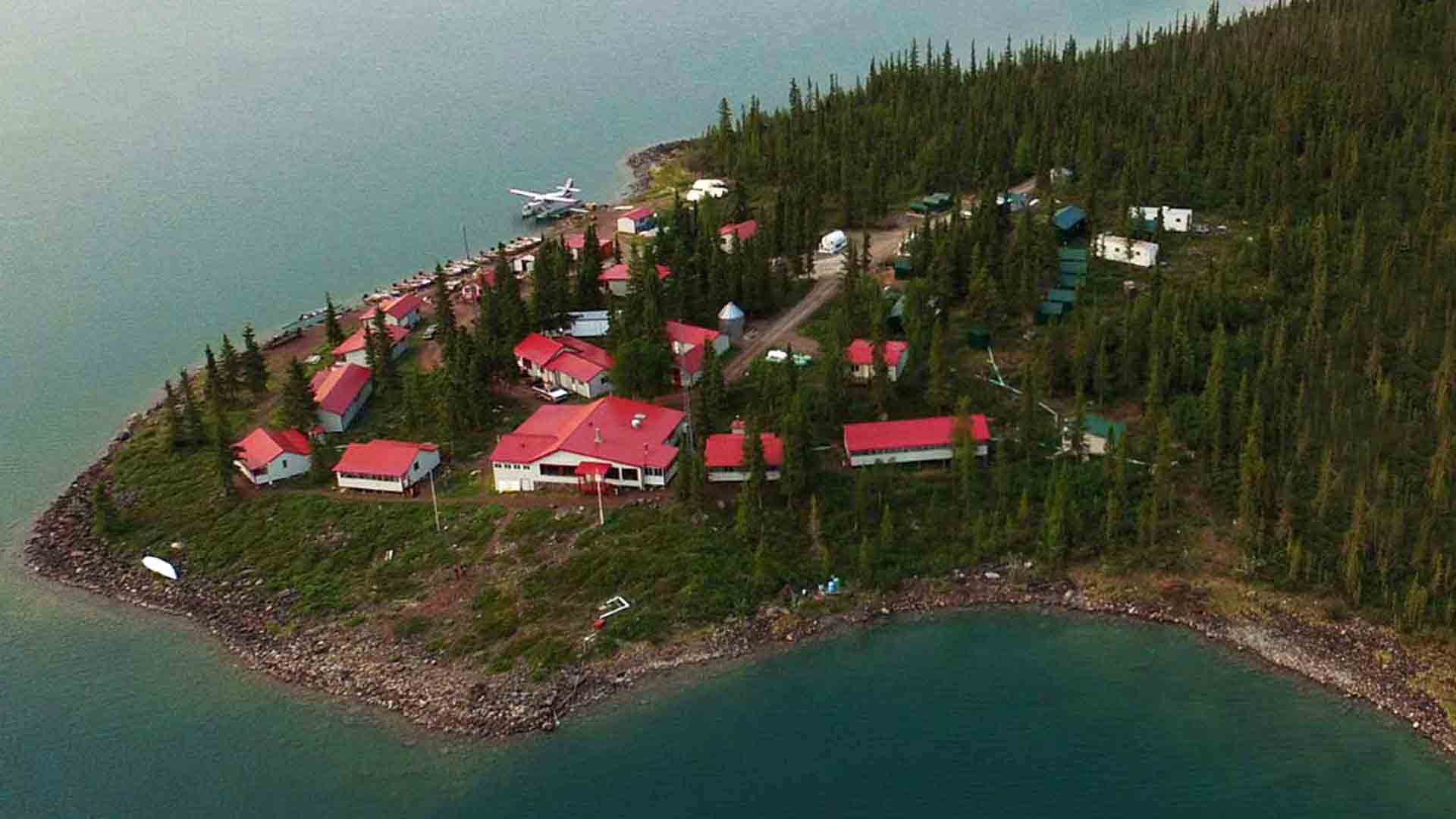 A visit to Great Slave lodge includes some of the finest fishing, scenery, and service in the Northwest Territories.
Species: You don't have to travel far for trophy lakers up to 60 pounds, Arctic grayling, and northern pike. Trophy lake trout are caught regularly within view of the lodge! 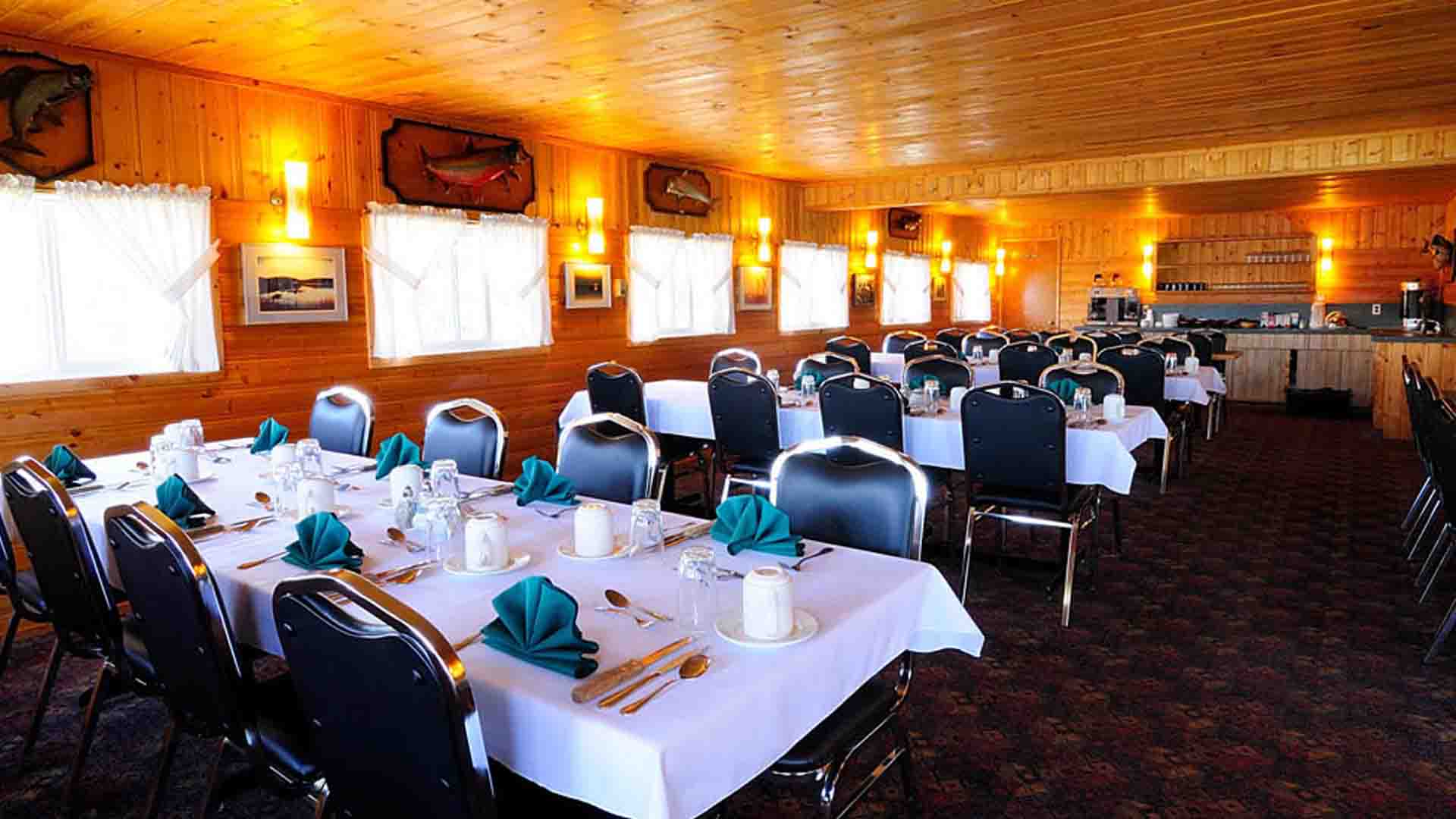 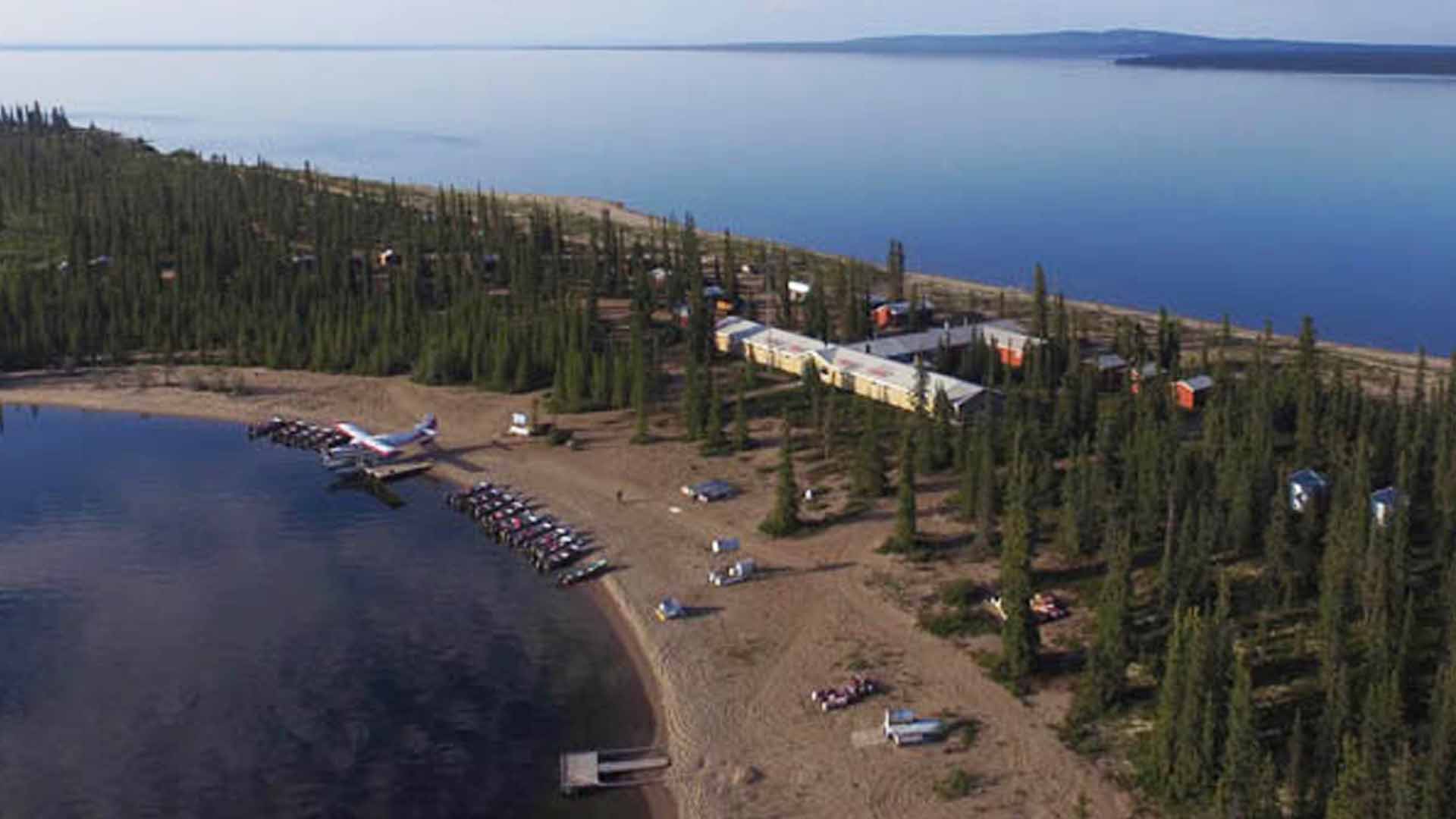 Trophy Lodge sits in Ford Bay on the Smith Arm of Great Bear Lake.
Species: The Lodge is known for producing some of the biggest lake trout in the world and some of the best pike fishing on the lake, plus 4-star northern pike and trophy grayling fishing.
The hotel-style Lodge accommodates 22 guests. Gourmet chef, pool table, Wi-Fi, electricity, conference rooms.
2023 Rate for Trophy Lodge:
7-nights and 6-days guided fishing $7,695.00 per person, plus 5% tax.
July 2 – August 6, 2023
June 30 – August 4, 2024
June 29 – August 10, 2025 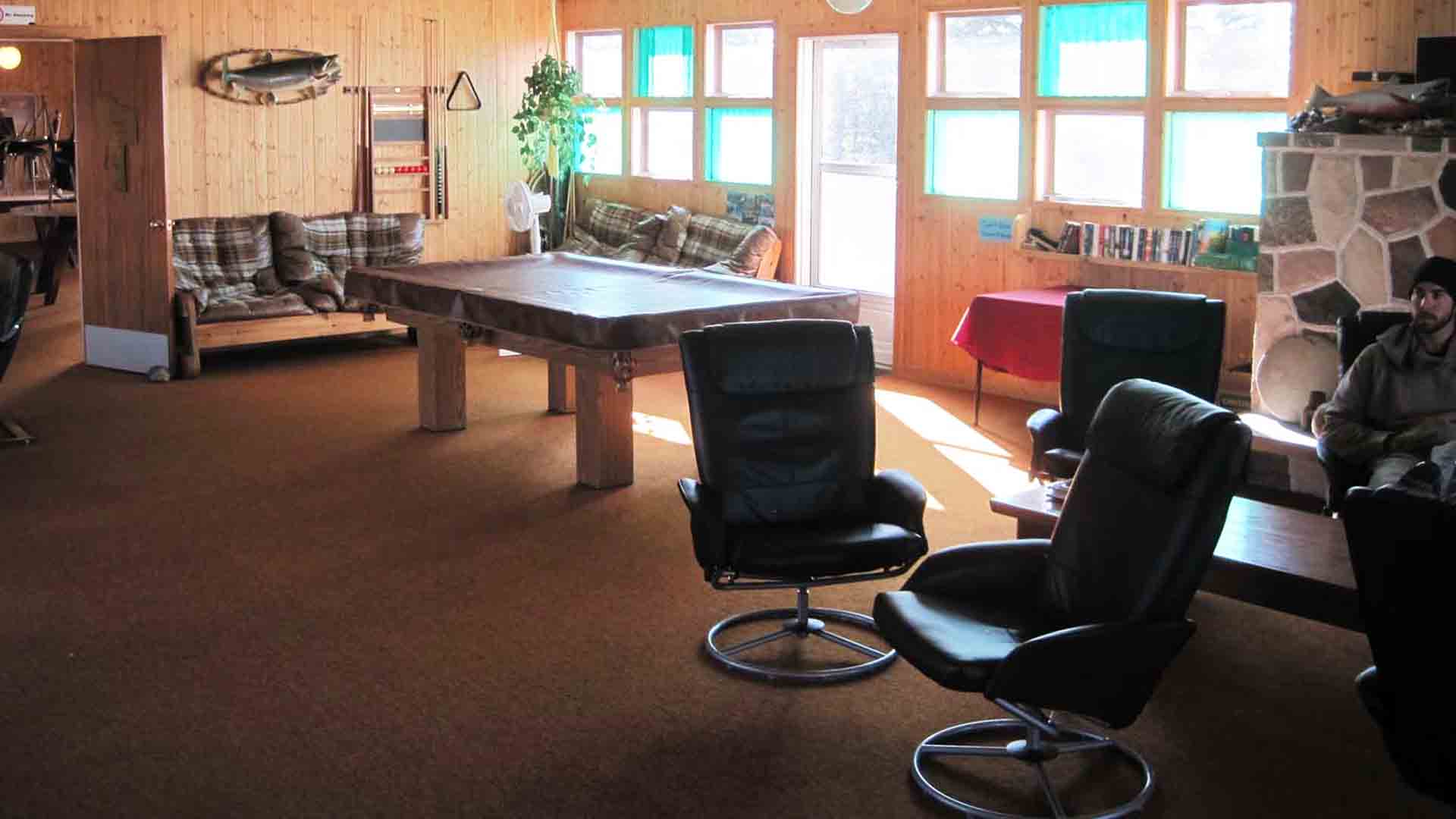 Trophy Lodge sits in Ford Bay on the Smith Arm of Great Bear Lake. The Lodge is known for producing some of the biggest lake trout on the lake and, therefore, in the world. The Lodge also has some of the best pike fishing on the lake. Plus, 4-star northern pike fishing and trophy grayling.
The hotel-style Lodge accommodates 22 guests. Gourmet chef, pool table, Wi-Fi, electricity, meeting rooms.
2023 Rate for Trophy Lodge:
7-nights and 6-days guided fishing $7,695.00 per person, plus 5% tax.
July 2 – August 6, 2023
June 30 – August 4, 2024
June 29 – August 10, 2025
For Trophy Lodge, you will depart from Yellowknife on a Sunday morning and take a 90-minute direct flight to Trophy Lodge, landing on the Lodge's private airstrip.

Arctic Circle Outpost Lodge is Plummer's only lodge that does not have its own private airstrip.
Species: Trophy lake trout, Arctic grayling, and Pike fishing.
• Unguided fishing
• A very private Do-It-Yourself trip
• Includes boats, 20-HP outboard motors, and fish finders
• Breakfast and supper served every day
• Shore lunch provisions or bag lunches
• Packages are available for groups of 6 to 12 only.

Getting To Arctic Circle Lodge:  You'll fly to Great Bear Lake Lodge, a 90-minute flight from Yellowknife. You’ll enjoy lunch at the Lodge and then take a 40-minute floatplane to Arctic Circle Lodge.
On Friday night of your departure, you'll take a floatplane flight back to Great Bear Lake Lodge and stay overnight. The next morning, you'll take a three-minute boat ride to The Lodge's private airstrip for your charter flight to Yellowknife.

Getting to the Lodges:

All of the lodges have their own private airstrip, except for Arctic Circle Lodge.
For the trip start, you'll fly to Yellowknife and spend one night in a hotel, not included in the package. The next morning, a shuttle will take you from the hotel to the charter terminal for your flight to the Lodge.
See Lodges above for more details.
The first and last hotel night and meals in Yellowknife are not included in the package.
Departure Day - For all packages:  On your return to Yellowknife, you'll be met by the Lodge staff, who will assist you and your luggage to your hotel.

For Plummers, even-numbered bookings are preferred for 2, 4, 6, or 8 anglers, and odd-numbered bookings will be reviewed upon request.
Great Bear Lake Lodge
7-nights and 6.5-days guided fishing
$7,095.00 per person
An Overnight side trip to the
Tree River Arctic Char Camp
(Overnights are available all season.)
An overnight is only available from
Great Bear Lake Lodge
$1,400.00 per person

• Airfare from Yellowknife to the Lodge, and return
• All meals at the Lodge
• Accommodations
• Daily maid service at the Lodge
• Wi-Fi at three of the Lodges:
Great Bear, Great Slave, and Trophy Lodge
• Guided fishing (Arctic Circle is Unguided)
• The use of spin and baitcasting rods and reels

The Packages Do Not Include:

• Airfare to Yellowknife, and return
• Hotel nights in Yellowknife
• Ground transfers and meals in Yellowknife
• Canadian Fishing license
• Flies and Lures
• Alcohol and liquor
• Gratuities to guides and staff
• Shop purchases
• 5% GST on total package and purchases at the Lodge
• Global Rescue
• Travel insurance
• Anything not mentioned under inclusions.

Plummer's Arctic Lodges Policies:
Deposit, Cancellation, and Refund Policy:  Plummer’s requires an $800.00 deposit per person to confirm a reservation.
The Final balance is due by April 1, 2023. Deposits are non-refundable and non-transferrable to a subsequent year
Fishing with Larry strongly recommends purchasing trip insurance.
Click here for our Travel Insurance page.