Payara are also known as the river tiger of South America. Hailed as tarpon on steroids, payara range from five to twenty-five pounds and can exceed 50 pounds.

After a successful 2019 exploratory season, Untamed Angling is pleased to announce a trophy Payara Fly Fishing Destination, on the Xingu River. The new Xingu River Lodge hosts only four anglers per week.

For this fly, lure, or bait fishing adventure, you'll get in two days of payara fishing at Maipures Rapids and four days of peacock bass fishing. You'll stay at Akuani River Lodge and two nights at a fully-equipped camp. 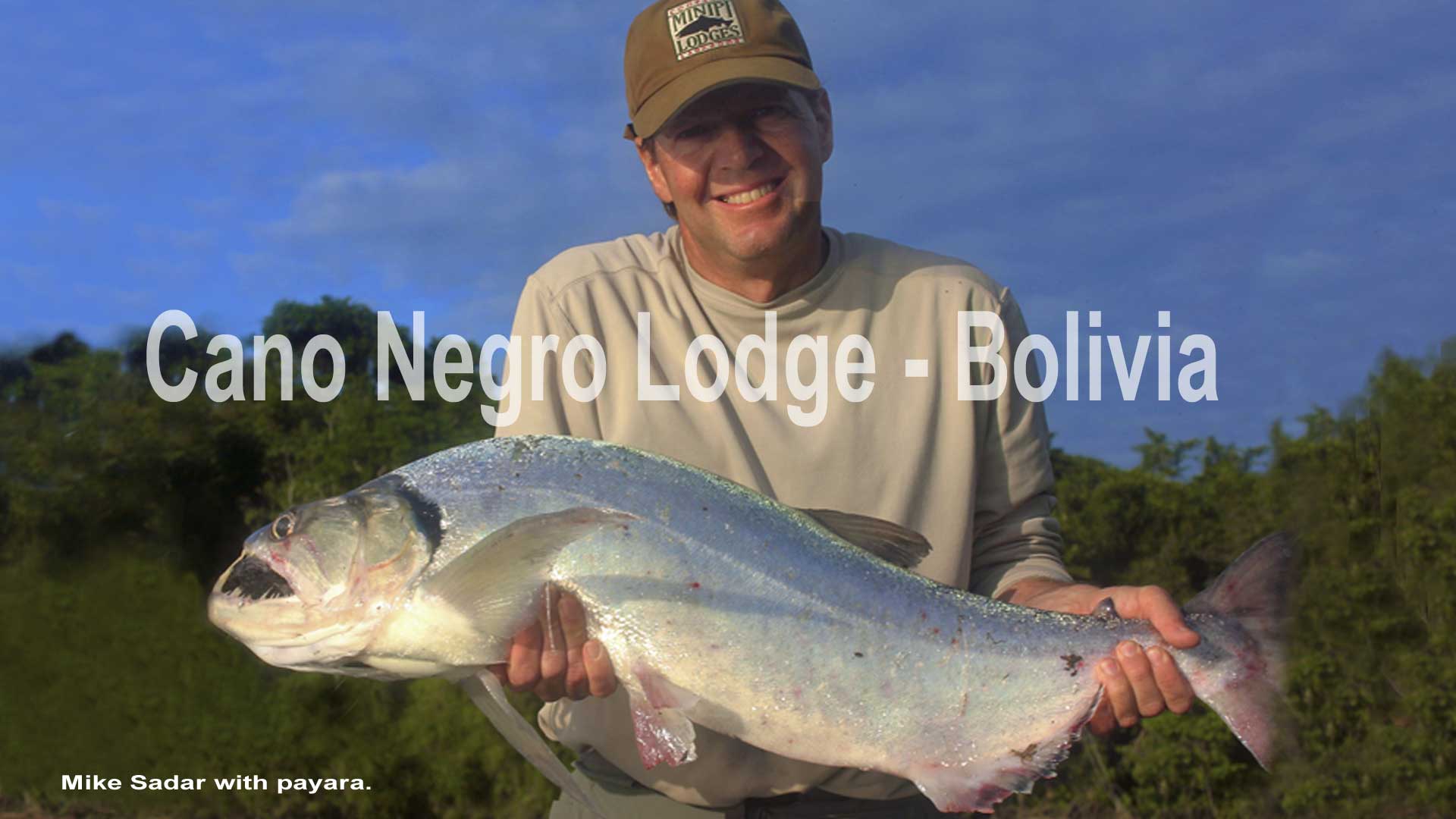 The Quest for the Dracula Fish – Cano Negro Lodge, Bolivia
– by Mike Sadar

It is the last morning of our fishing trip adventure, and we have just a few hours to run up to a nearby hole to try to catch one more giant payara. We arrive shortly after daylight, and I do my best to converse with our guides to anchor farther above the riffle that leads to a deep hole. I have learned that Payara like the faster current with its high oxygen content and in low light; they might be up in shallower water. If they are not, I have the perfect drift to allow the line to drop from the riffle and rapidly sink into the deep hole below. The Payara are somewhere in this spot; we just have to pinpoint the likely location of the school of vampires!

We fish down the narrow seam of water but soon drift into a back eddy, and the currents begin to rotate the boat, making any kind of a natural streamer drift difficult to complete. We quickly pull anchor and move a bit farther up the seam and a bit closer to the opposite shore. Our guide Bandalay quickly drops the two anchors, which are necessary to hold the boat steady in the fast-flowing riffle. I make my first cast far upstream and allow my 8-inch red and black streamer to sink as deep as possible before starting my retrieve. It suddenly stops, well above the drop off from the riffle into the hole below, and I madly take the slack out of the line, hoping the fish is still on. I manage to draw the line tight when the monster Payara leaps two feet out of the water! I quickly strip strike another seven or eight times to ensure the hook has penetrated this beast’s boney jaw! The action sends the fish deep into the hole, and I am now into the battle I have waited all week to have. From the initial leap to the hard first run, this may be a world record beast! 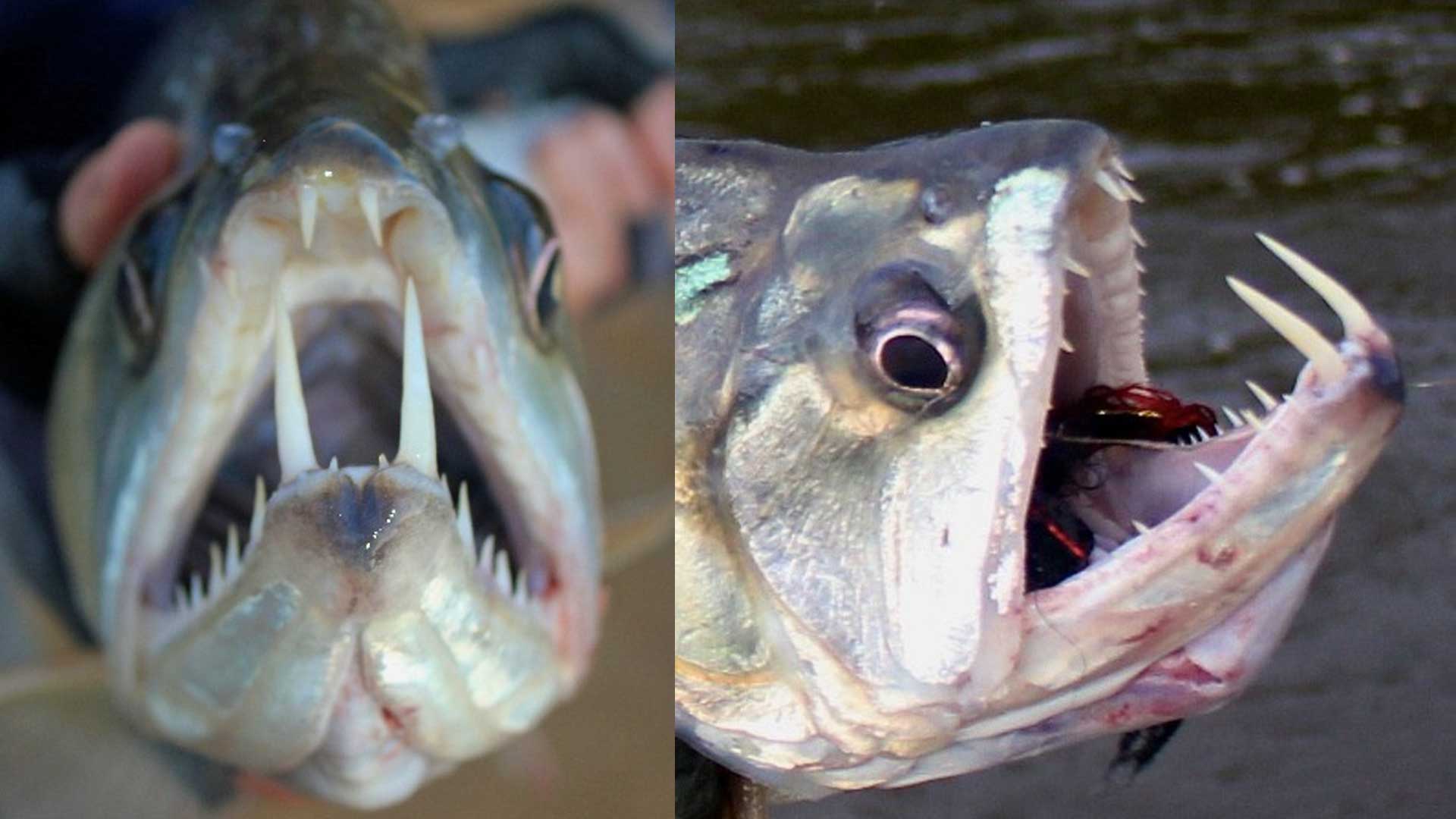 Twenty minutes later, the big fish becomes lethargic and finally comes close enough to the boat that our guide can gently wrap his hand around the tail and hoist the big fish into the boat. It is my biggest Payara of the trip and my life, measuring over 90-cm long and a sure bet for the all-tackle world record for length. We quickly take all the necessary photos and safely release this Jurassic salmon back to the waters of the San Simon River. I lay my rod down as my trip is fulfilled beyond imagination!

Seven days earlier, we are flying over the dense Bolivian Amazon, headed for a little known lodge that was constructed on the tiny Caño Negro River. The dense jungle masks the lodge, and it is only at the very last minute that its tiny dirt runway appears in front of us. We make a smooth landing and are promptly greeted by the staff that is eager and willing to feed us and take us fishing. We are not sure what to expect other than a few threads of fishing information from two earlier anglers who visited this lodge for the first time the year before. If the fishing is even close to what was described, we will have a world-class experience!

The Caño Negro River is a small tributary of the larger San Simon River, which was suspected to contain good numbers of Payara, our target species. Armed with a set of teeth that would make Dracula jealous, Payara of giant sizes are only found in a few South American rivers that flow near the equator. It was rumored that another river, the San Simon, was just discovered, and it contained Payara possibly to 50-pounds. This was the reason why we booked a trip to Cano Negro Lodge, which has secured exclusive rights to this river.

We found out that Payara would prove to be some of the toughest fish to land once they have taken the fly. With their long and numerous canine teeth, they are a pair of scissors that swim. They will destroy anything they bite into! They are incredibly strong and hardy when hooked and have the keen ability to destroy and shed the fly with a jaw with each hook set. Their jaws are more than that 95 percent bone that is very tough to penetrate with anything but the sharpest and strongest hooks. Combine this toughness this with unbelievable areal displays, long runs, a keen sense to find the nearest structure to wrap up and break off, makes the Payara one of the meanest dudes in on the planet!

Over the course of our trip, our landing percentage of hooked Payara was no better than 20 percent. This was actually increased the last couple of days fishing when I realized that I not only had to strip set the line but do so with an attitude that I would use such a strip set force as an attempt to break my 30-pound tippet. I would then repeat the strip set four or five times to drive the hook even deeper. With this attitude, I started landing about half of what I hooked! They are that tough!

The Payara was designed to hunt under the lowest of light conditions as they have huge pupils that are highly dilated to gather the surrounding light. Thus, they are most active during the lowest light hours, which is from first light up until about 10:00 AM and then again from about 3:00 PM until dark. During the brightest hours of the day, we spent time chasing other species, which was predominately peacock bass of a very nice average size. We would simply work the shorelines for peacocks and could easily average 30-50 fish in this four-hour period with all of the fish averaging between 3 and 8 pounds. We heard of larger fish being caught, but it appeared it would be later in the season when the water was much lower than when we fished this river. Nevertheless, it was great fishing for the peacocks!

For Payara, we tied the long 7-8 inch bi-colored streamers that were tied on the sharpest hooks possible. We found the new Wright and McGill Trokar hooks, which have three razor blade edges that are sharpened to point outperformed all other hooks. Even with our lower hook up to landing ratios, we were more than twice as good as everyone else. These hooks were capable of penetrating the Payara’s bone. The best hair for tying such long streamers was Icelandic sheep’s hair, which grows to the necessary length. The favorite color combinations included black with red and red sparkle, black with blue with blue sparkle, black with purple and black with silver tinsel. We also found color combinations of olive, white and gold sparkle, or blue and white with silver sparkle worked better under brighter conditions. In order to get these flies down in the holes were the Payara were holding, we used rapid sink lines such as T-300 to 500-grain sinking heads. It was absolutely necessary to get the fly down to the fish, as they were not prone to moving up in the water column to chase flies other than during the lowest of light conditions. To cast these flies we found a 9 to 10 wt. rod was necessary and worked well for also landing these fish.

It was for the Payara that we came to Cano Negro Lodge, and we had multiple hookups each day. As mentioned, the catch rate is much lower than the strike and hookup rate. In seven days of fishing, I landed 21 Payara up to almost twenty-five pounds but literally had over a hundred strikes. These fish are incredibly tough to hook, and one should be well-honed on a strip set response to a strike, as it will vastly improve your hook sets and landings. Some days produced better than others, and we were still in a high water situation, which made us search harder for Payara. Some holes did not produce, while others would produce a dozens of strikes. We just had to move around and try different runs and holes until we found fish.

Bolivia has become a fly-fishing hotspot, and it deserves the recognition. Travel into Bolivia from the USA is very simple and the country adds it remarkable geography, fauna, and flora, to the exceptional fishing. It is a place that any serious angler should consider. Cano Negro Lodge did prove to have it all. From world record-sized Payara, to an excellent peacock bass and catfish fisheries, it offers the angler the opportunity to catch many different freshwater jungle species that are available at very few if any other destinations. It is a place that should be placed near the top of the adventure angler’s list of destinations.
- Mike Sadar