The Kanektok also known as the “Chosen,” is an Alaskan river located some 400 miles southwest of Anchorage, flowing through the majestic and massive Togiak National Wildlife Refuge which is the fourth-largest National Wildlife Refuge in the US. During the 90-mile float trip, you'll see many of Alaska’s big game and bird species which are common in the Refuge. 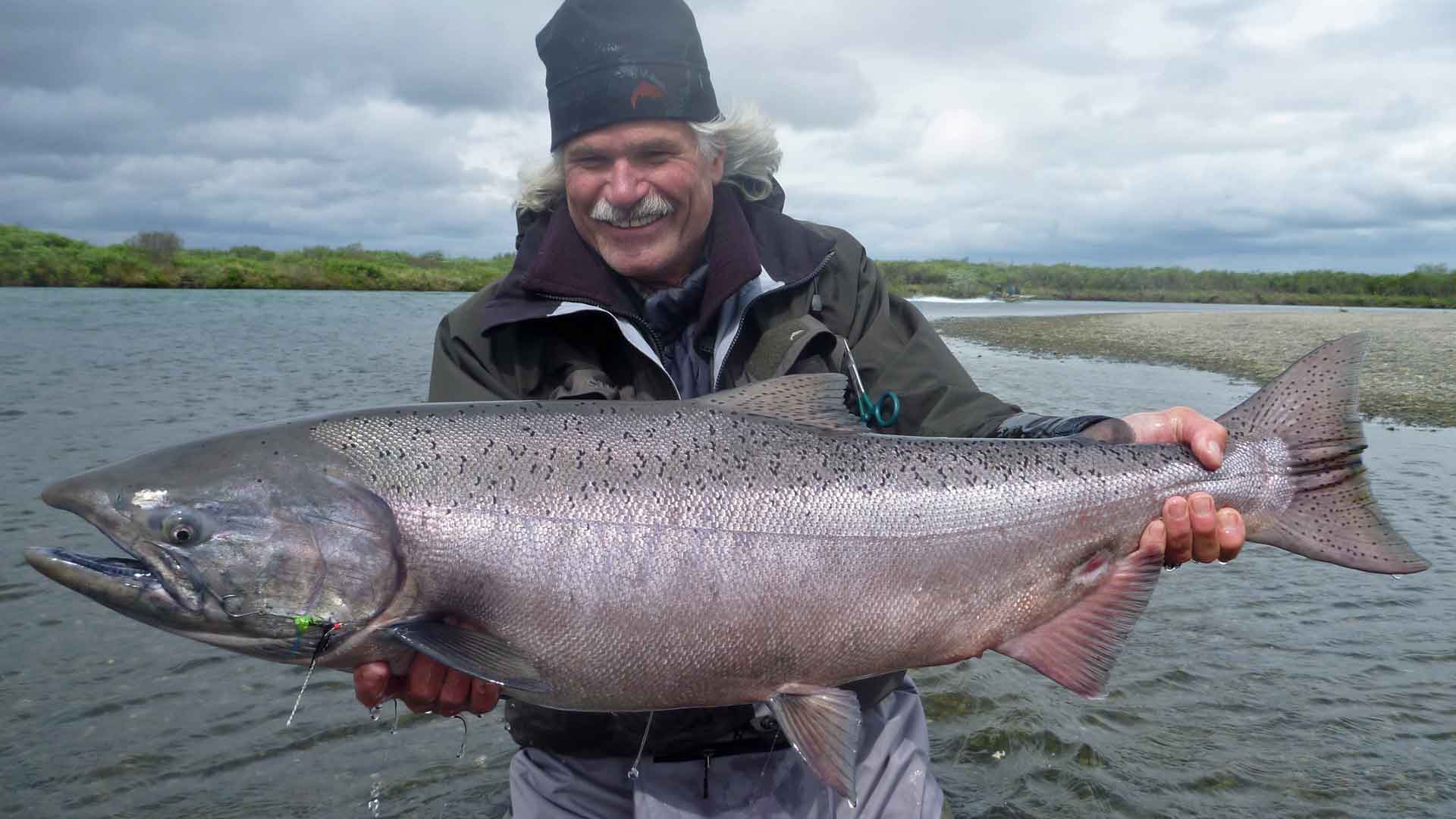 Dave Duncan and Sons have guided in remote Alaska for over forty years. The Kanektok River continually grows in size and changes in character as it flows from the mountains, through the foothills and finally merges with the sea. The Duncans' 90-mile Kanektok River Float Trips are limited to four weeks each season and eight guests per week. Two anglers per guide and top quality raft.
With incredible fly fishing for large leopard rainbows, salmon, dolly varden, and grayling. The Kanektok River is world-class because of its fish-ability. With its many braids and side channels, it feels like a much smaller river and is ideally suited for fly fishing. Strict catch-and-release fishing, except a fish or two is occasionally kept for dinner. The upper Kanektok River has a hook size regulation of nothing larger than #1 or 1/0. Single debarbed hooks are to be used at all times.
The Float Trip:  You'll take a floatplane flight to Kagati Lake, an isolated wilderness lake. Here, you'll meet up with the Duncans' guide team and begin the 90-mile float trip downriver to the village of Quinhagak, where the river meets the ocean. 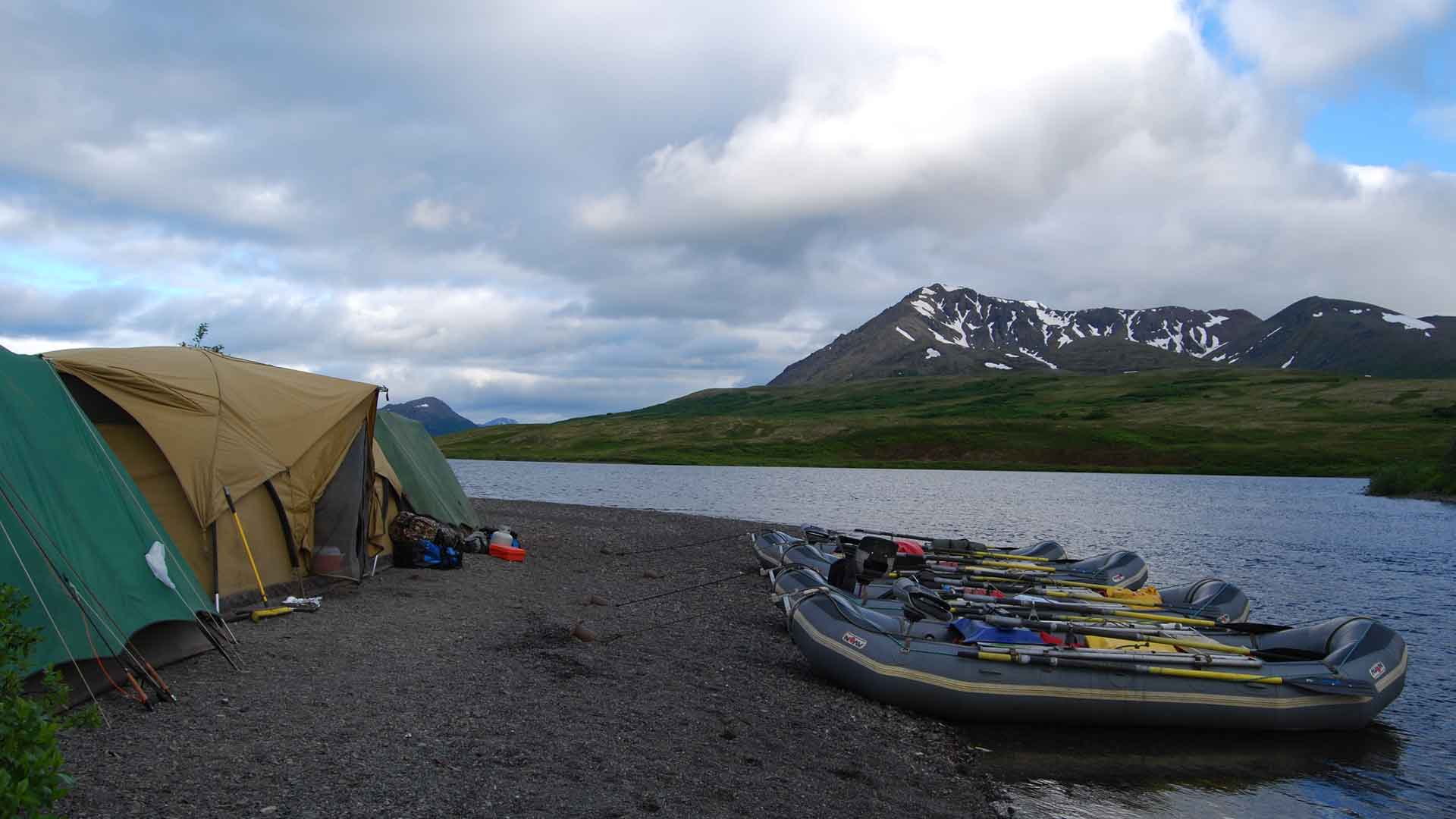 2021 Season:  Four floats trips are available from mid-July to mid-August, 2021.
Species:   See Species Chart above. Late June and July, you'll target sockeye, chums, pinks, king salmon, leopard rainbows, dolly varden, and grayling. In August, silvers and pink salmon (in even-numbered years) are in the river.
Guides:  Their average guide has been with them for over six years and some as long as twenty years.
Rafts:  The Duncans' boat system include high-end 16-foot Avon Pro inflatable rafts with rowing racks and floorboards to stand on while fishing. You'll have the option of walk-and-wade type fishing or float fishing from the boats.
Fishing Equipment:  No fishing equipment or tackle is provided. We’ll send a detailed list of recommended flies and gear in our confirmation packet. All camps have fly-tying benches with all the materials provided.
Licenses:  Are not include. A non-resident fishing license $45.00 and king salmon tag $45.00, if applicable. 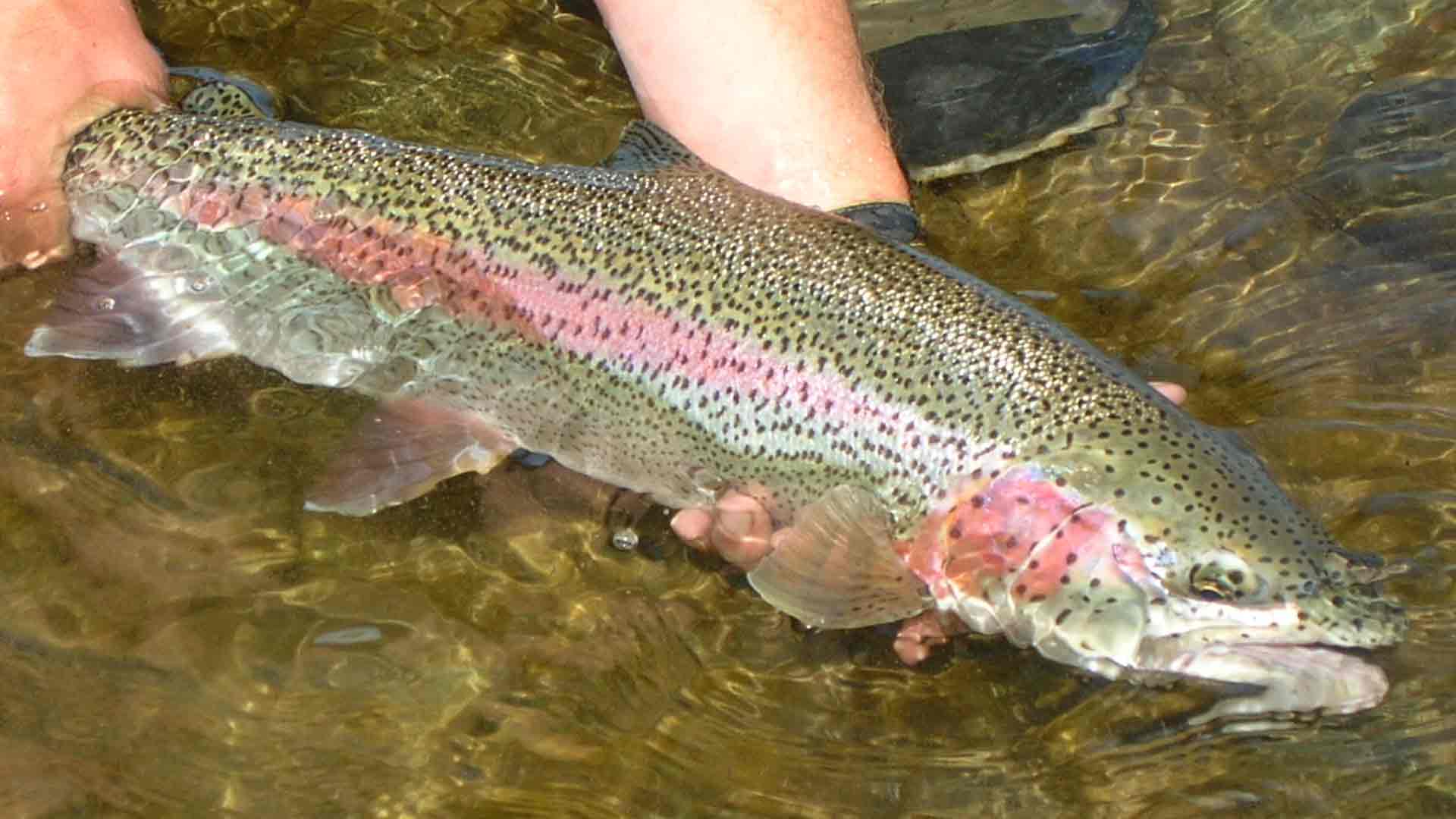 The Duncans' Camp system includes high-quality tents and camping equipment. You'll sleep on comfortable cots. The meals are great in this beautiful remote setting.
In efforts to preserve the beauty of this wilderness area, Dave Duncan and Sons have always practiced trace free camping. This means that absolutely nothing can be left behind.

“I have thoroughly enjoyed all of my float trips down the Chosen River. The scenery in the upper river, the fantastic dry fly fishing for Arctic char, dolly varden, and grayling, the great salmon fishing and the camaraderie that develops on these float trips.”
–Jim Spencer.

On the float trips, you’ll stay in a very comfortable camp that has warm, dry double-occupancy tents, hot showers, and great fishing—right out the front door. The camps are deluxe tent camps complete with spacious kitchen and dining facilities, a large social tent, and great meals.

90-mile Kanektok Float Trip:
Each trip is limited to eight guests, with one guide and two guests per raft.
6-nights and 6-days guided fishing
$5,700.00 per person

Guided fishing, meals at the camp, non-alcoholic beverages, and use of all deluxe tent camping and boating equipment.

Airfare, overnight in Bethel at Papa Bear Adventures ($80.00), dinner in Bethel, alcohol, gratuities, fishing license, King Salmon Stamp (if in season), fishing equipment, and anything not mentioned under inclusions. 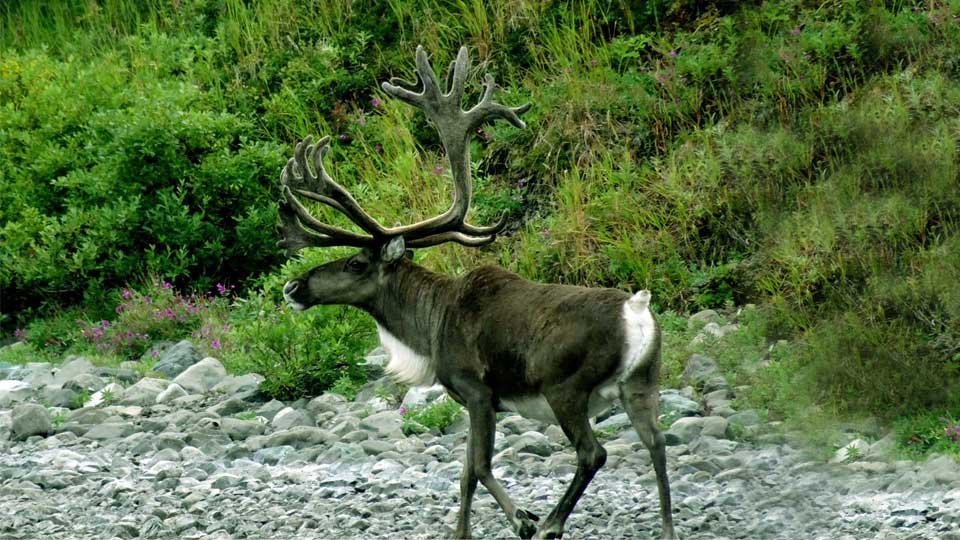 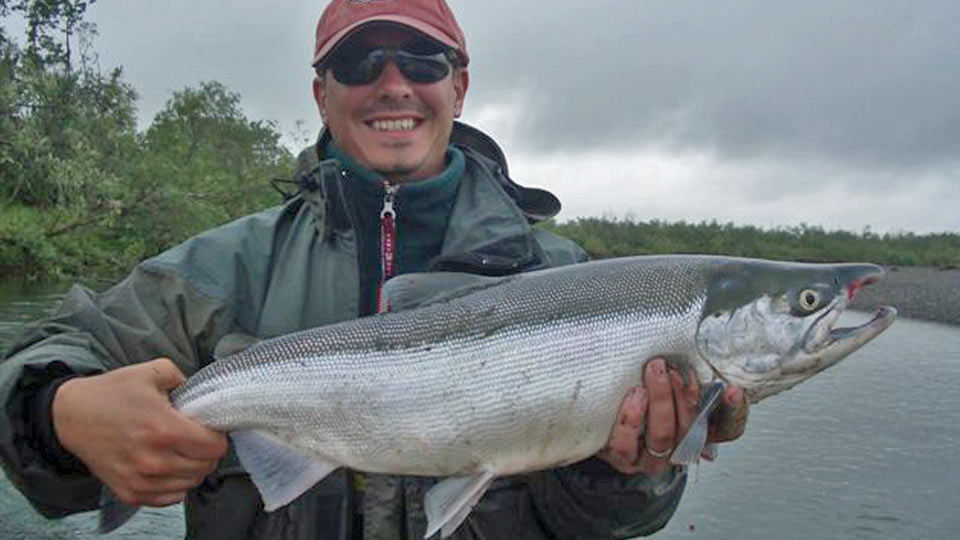 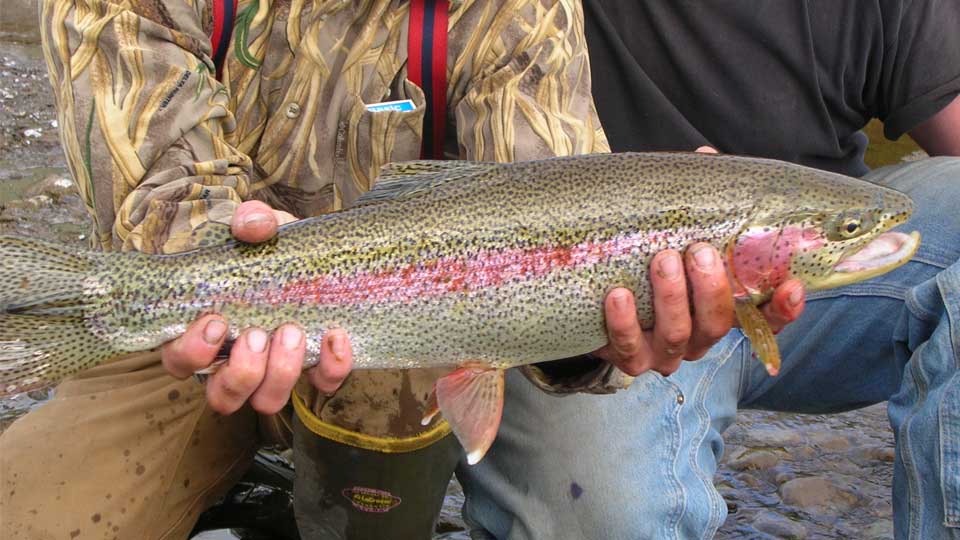 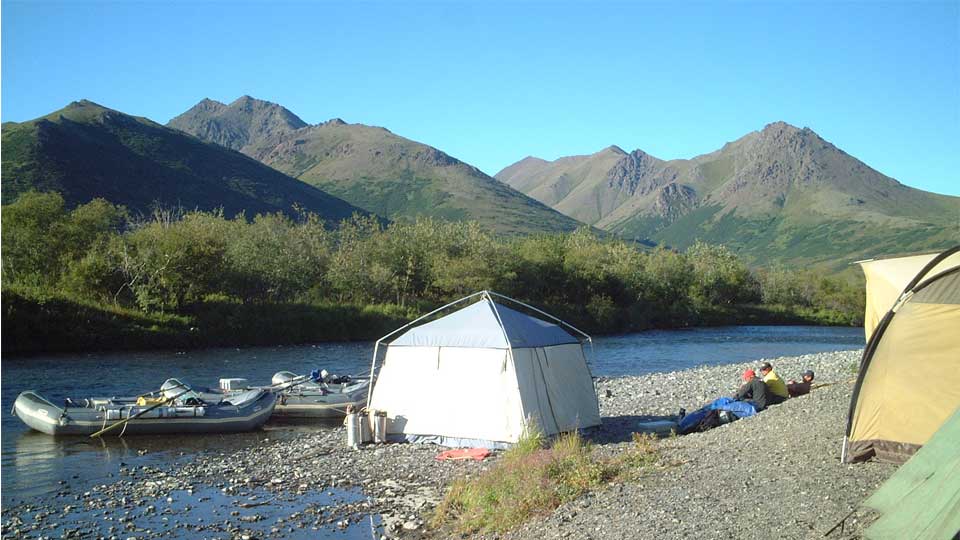 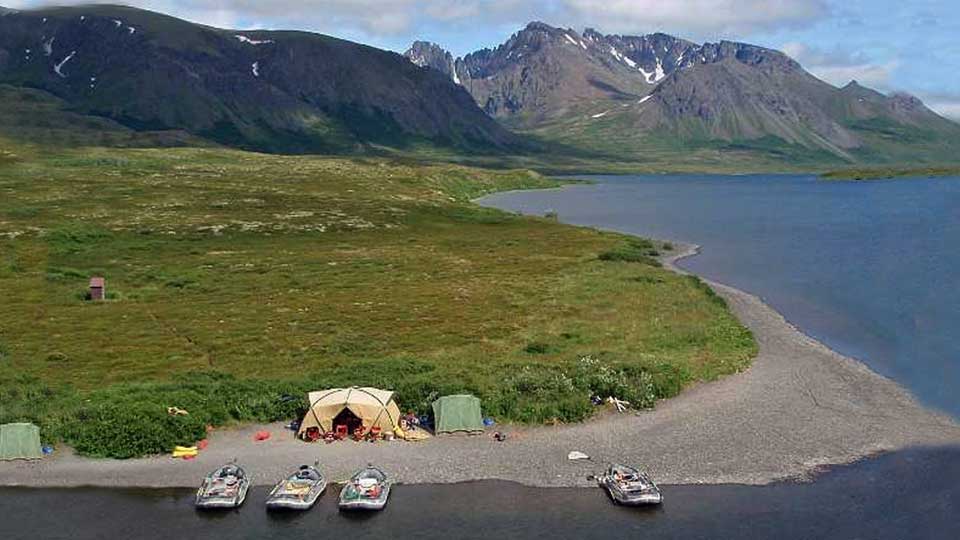 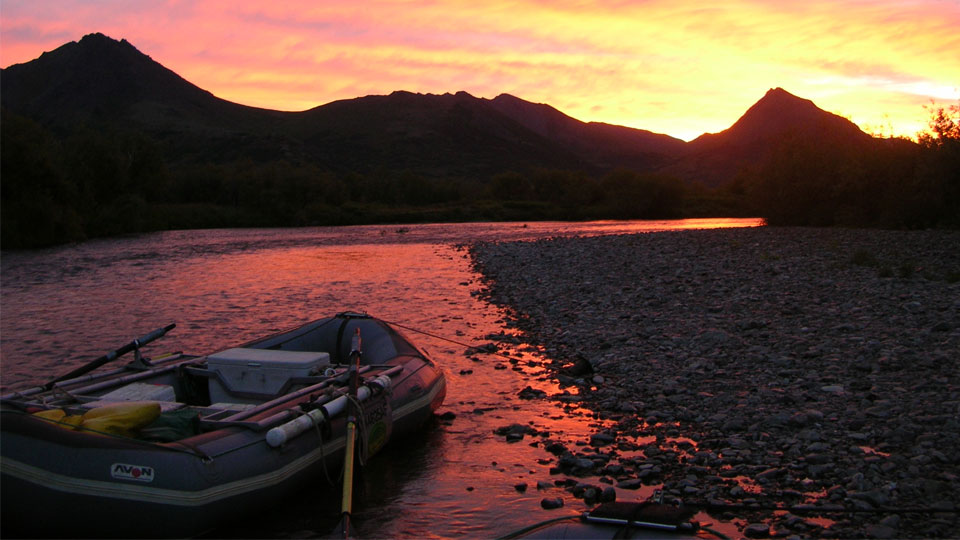 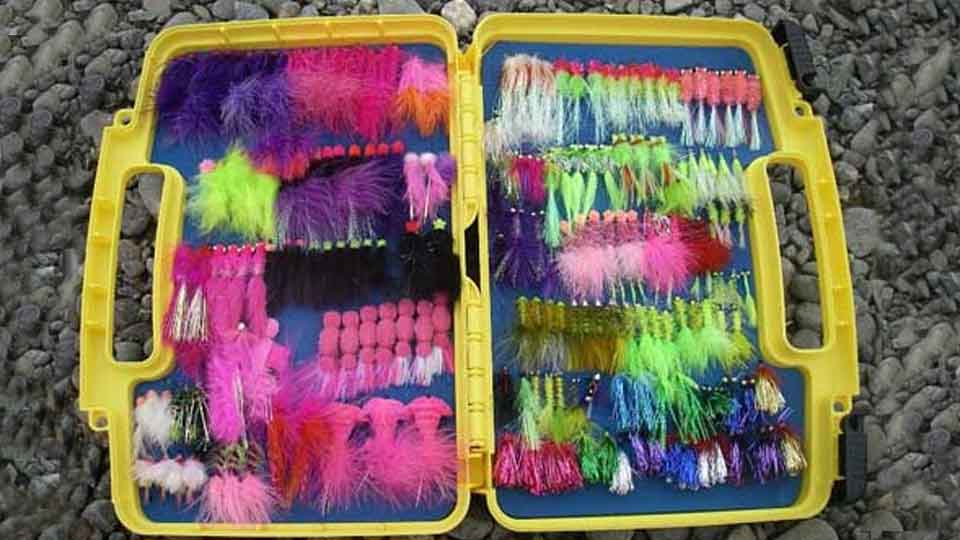