For this adventure, you'll fly or lure fish for peacock bass the crystal-clear waters of the Rio Novo, a tributary of the Xeriuini (pronounced sure-knee). The Xeriuini River Preserve is in the Roraima state, in the Northern part of Brazil's Amazon Rainforest. The Xeriuini is a blackwater river (a slow-moving channel flowing through forested swamps or wetlands), over 200 miles long, with numerous tributaries and over 100 lagoons.

Bucket List Fly Fishing:  There are literally thousands of fishable tributaries in the Amazon Rainforest, ranging from small clear creeks to huge lagoons. Over the last 20 years, the Bucket List Fly Fishing team has scouted the Amazon, creating unique exploratory fishing packages. With the help of a drone, they have been able to locate landlocked lakes that have never been seen or fished before and are loaded with fish. They have private exclusive leases on the areas you'll be fishing. 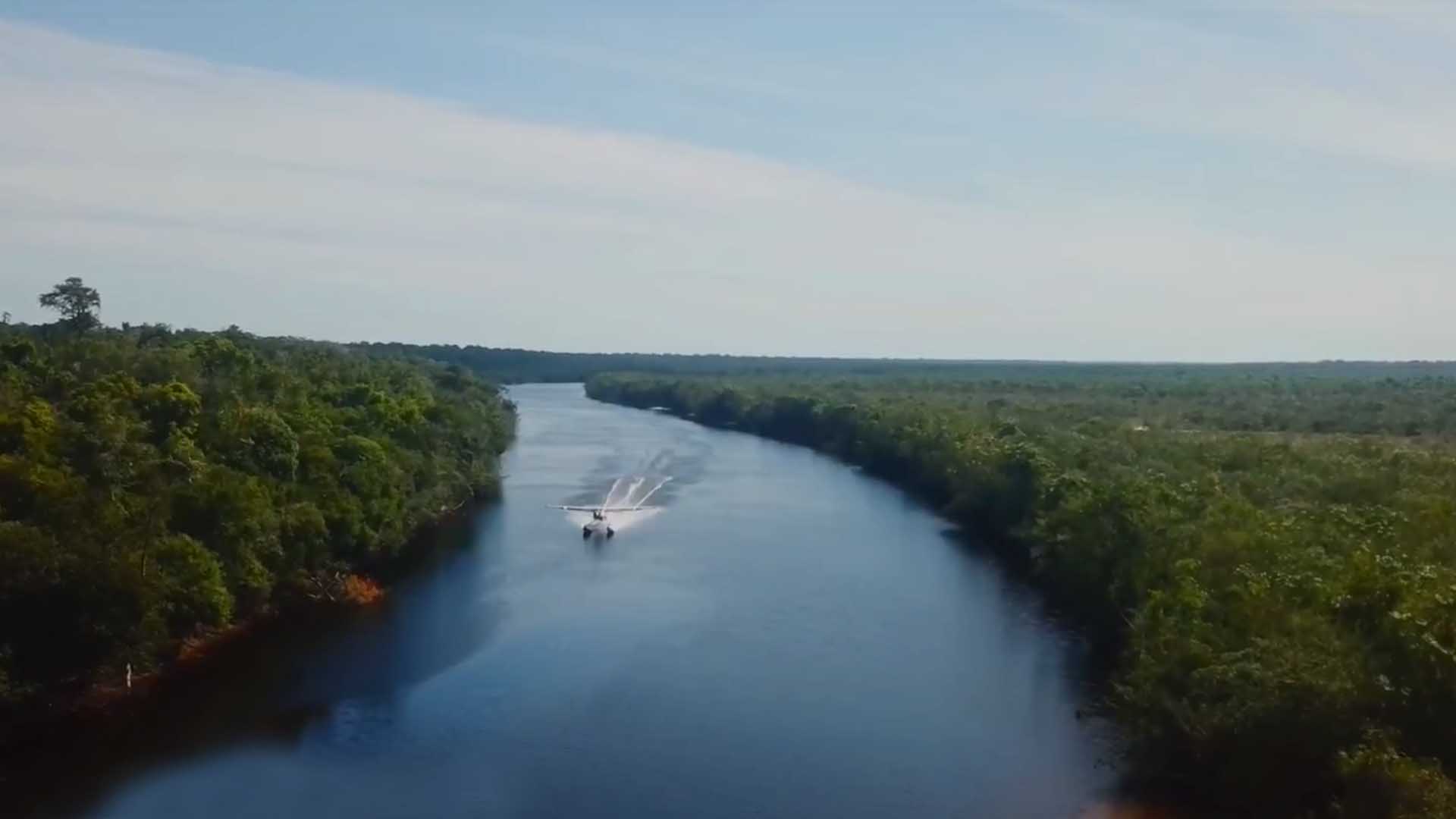 The Rio Novo:  You'll take a floatplane flight to the headwaters of the Novo River in the Xeriuini River Preserve, a remote area over 100 miles from the closest village. The Novo has some of the clearest water in the Amazon, beautifully shaped sandbars, and a narrow channel with trees hanging over it. The headwaters of the Rio Novo are very narrow and shallow during the dry season; similar to the Agua Boa headwaters, in some places you can cast all the way across it. The palm trees of the igapo forest (flooded blackwater) attract macaws and toucans.
Species:  The Rio Novo is loaded with four subspecies of peacock bass. Butterfly and Orinoco peacocks (often known as cichla) reach over 10 pounds, and the largest peacock, the Acu (cichla temensis), reach 20+ pounds. Sightfishing and topwater opportunities. Target other jungle species such as redtail and shovelnose catfish, arapaima, arowana, payara (vampire fish), jacunda, and wolffish, to name a few. It's possible for boats (two anglers) to catch over 200 peacocks in a day. During the week, each angler should catch a peacock over ten pounds.
2022 Update: "The Fish in this river will not have seen an angler in three years. Before that, in 2019, our first season on the river, we only had 32 anglers see it for the first time ever." - Bucket List Fly Fishing

Season:  These trips are offered in January and February—five weeks each year during the dry season—eight anglers per week. Only 40 anglers per year get to fish these pristine waters.
Guided Hours:  You'll get 8 to 10 hours of guided fishing each day.
Guides:  Rob Anderson and the head guides provide extensive yearly training for their guides in both fly fishing and conventional angling. English is taught by the main camp host, who speaks five languages and has a jungle degree in flora and fauna.
Boats:  18-foot flat-bottom skiffs with 30 HP outboard motors, electric trolling motors, and two casting platforms allow anglers to cast at the same time. Skiffs have plenty of storage for extra gear. The boats are small and light enough to navigate small creek channels and shallow water and can even be pushed into landlocked lagoons for the possibility of a lot of fish.
Equipment:  No equipment is provided. It's possible to make over 500 casts per day, so 8-9 weight lightweight fast-action rods are recommended. Flies are $120.00 per dozen; three to four dozen are recommended for the week. A comprehensive packing list is included in our confirmation packet.
A Fishing License is included in the package. 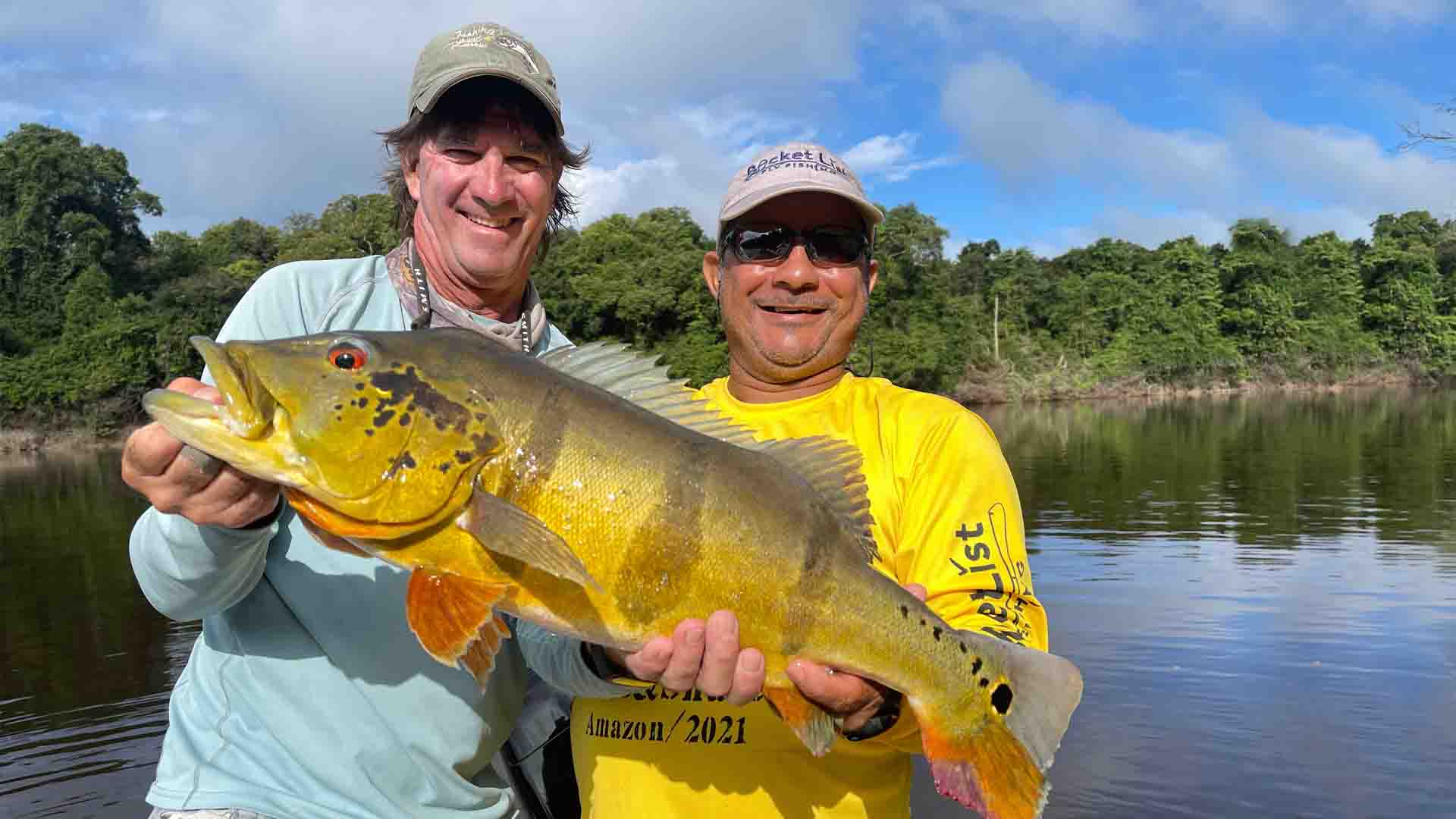 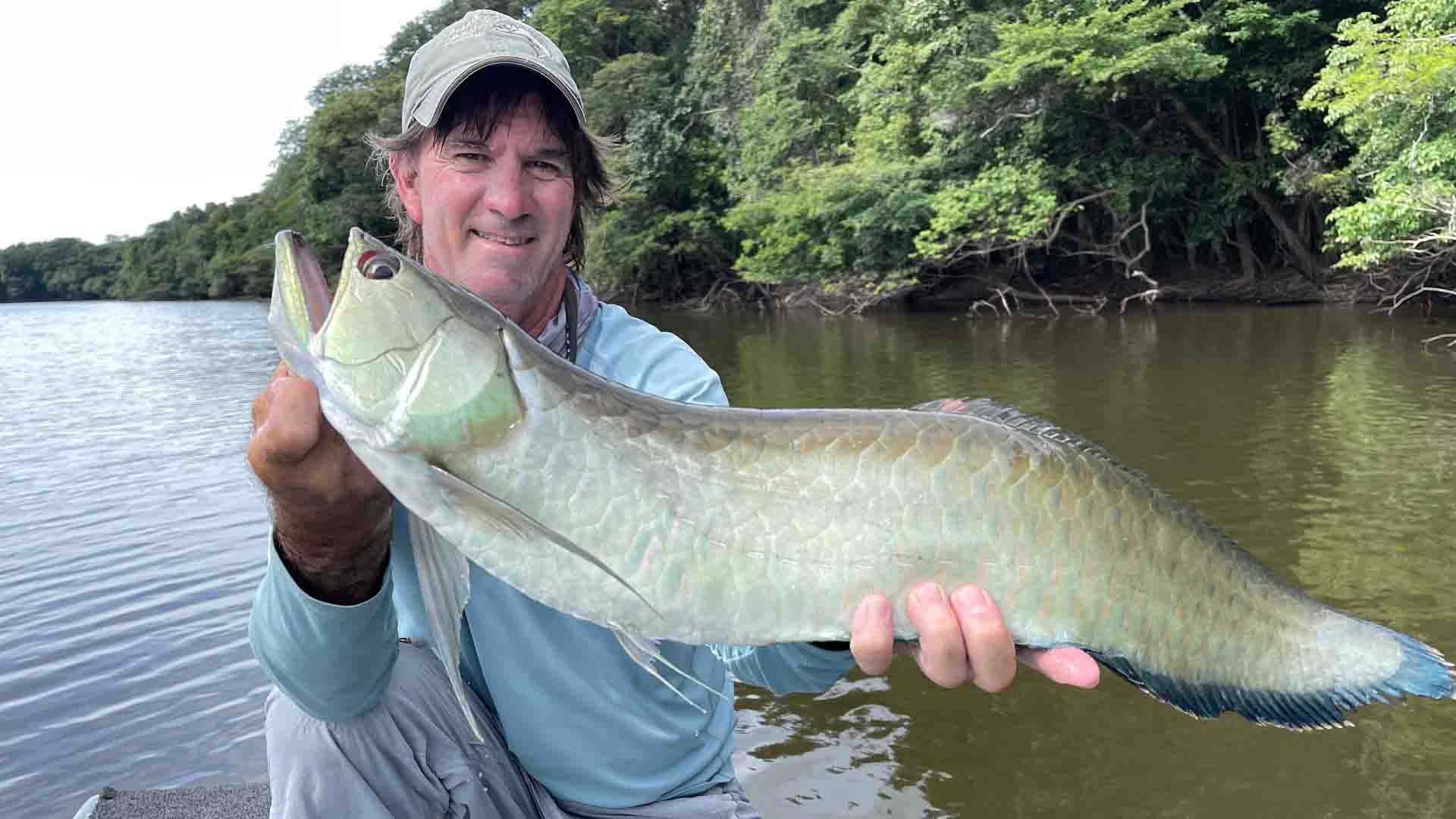 Typical Fishing Day
As the sunrise slips in the Amazon Rainforest, everything comes to life. Parrots and macaws fill the air with their distinct chirping sounds.
6:00 a.m.  Hot coffee or tea.
6:30 a.m.  Breakfast in the dining cabin. Then you'll pack what you want for lunch.
7:00-7:30 a.m.  Head to fishing grounds.
Noon:  You'll enjoy lunch on a beach with some shade trees. The guides can set up hammocks in the trees for you to enjoy some rest and a cerveza.
2:00 p.m.  After lunch, fishing until late afternoon.
5:00 p.m.  You'll start heading back to Camp, where the Host greets you with Caipirinha cocktails (Brazil's national drink) and appetizers. With about an hour of daylight left, there's time to shower, swim in the river, toss a frisbee around the beach, or challenge the guides to a soccer game. Evening temperatures cool into the 70s.
7:00 p.m.  Dinner inside the dining cabin or on the beach. 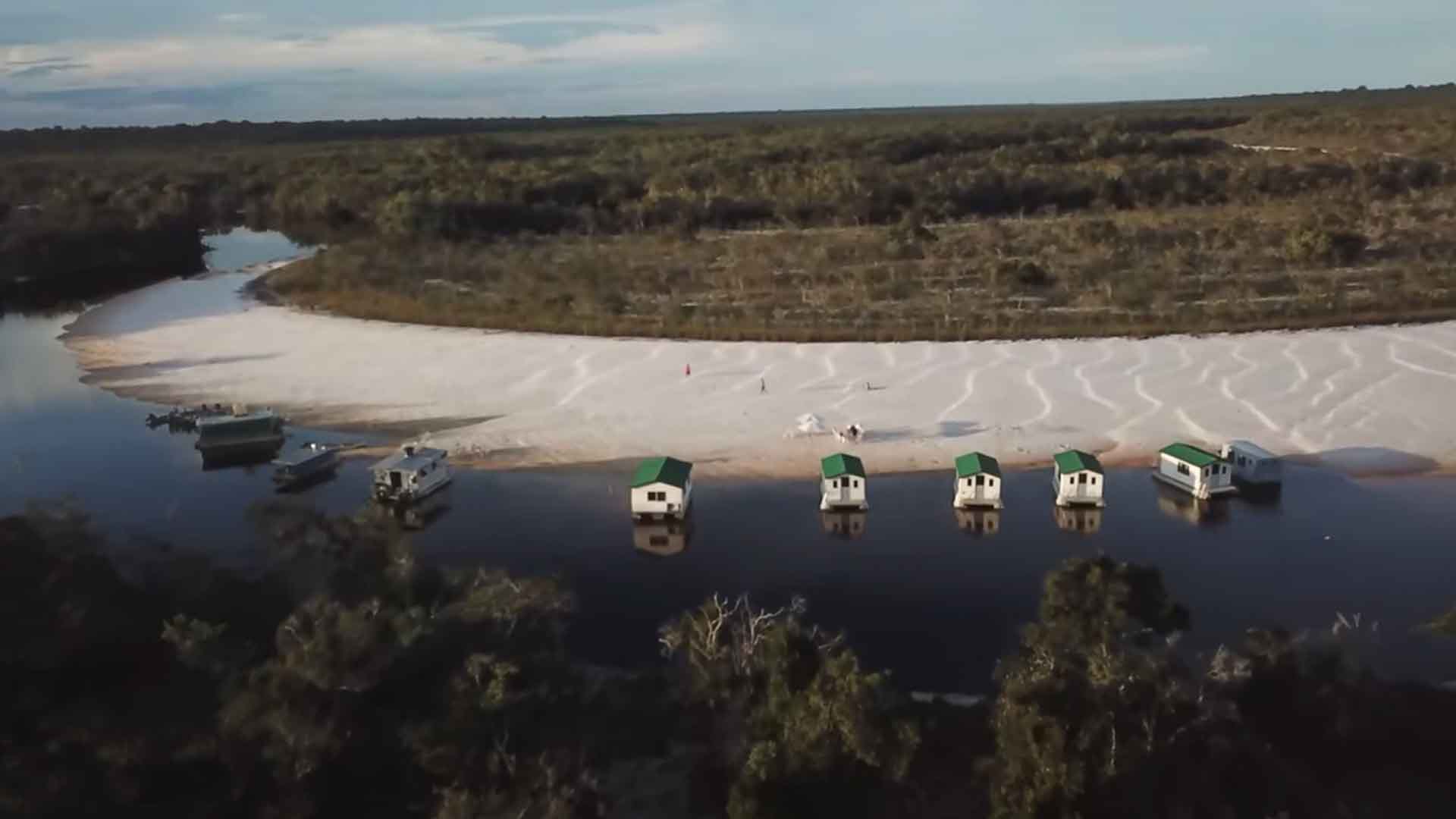 Cabins:  Hard-walled and air-conditioned floating cabins with two twin beds with real mattresses, a bathroom with toilet, shower, and sink, multiple outlets for charging your devices (you will need an adapter), overhead lights, and reading lights. Ample storage for your gear and a desk and chair. The highly mobile cabins float in less than six inches of water and get to the extreme headwaters area of the Rio Novo. Camps are moved two to three times each week (up to 20-miles each move), mainly while you are out fishing.
Insects:  There are virtually no mosquitoes on the Xeriuini and Rio Novo. Occasionally you may run into no-see-ums, but they carry no diseases.

The Feisty and Aggressive Jacunda 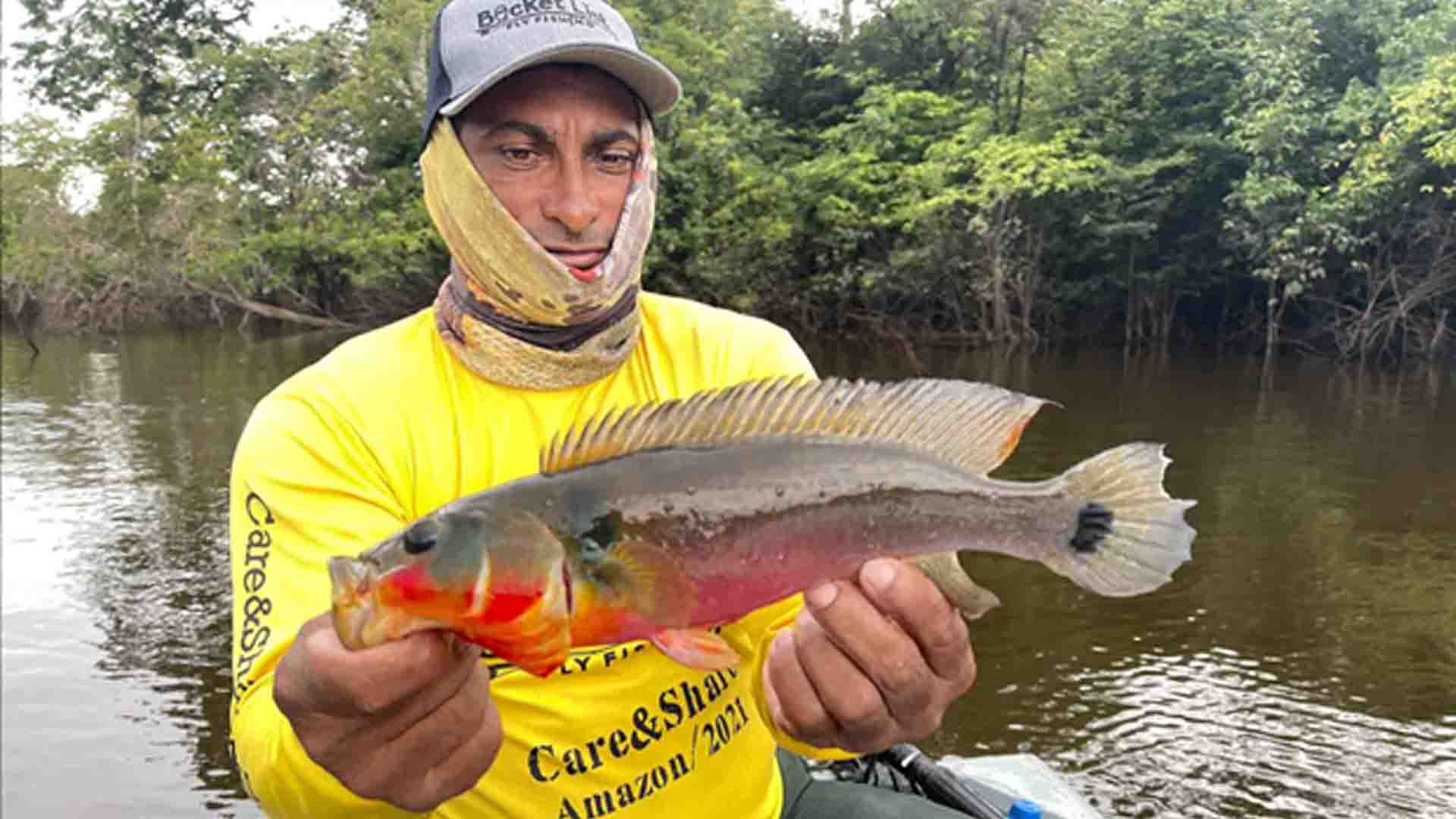 Communications:  Free Wi-Fi is available at camps, although somewhat slow and spotty. WhatsApp is recommended for cell phones. With Wi-Fi connection, the app allows you to make international calls and texts free of charge.

Meals: Meals are served in the air-conditioned dining cabin or there are barbeques on the beach. The camp chef has cooked for fishing operations for over 20 years, specializing in Brazilian cuisine. Dinners begin with a soup of the day—Piraha Soup is a favorite, followed by the main course of beef, chicken, or fish, ending with a dessert such as flan or ice cream. Fresh baked breads and cakes served with fresh fruit.
Alcohol:  Beer, vodka, gin, and rum. Wine is served with dinner.

Beverages Back at Camp 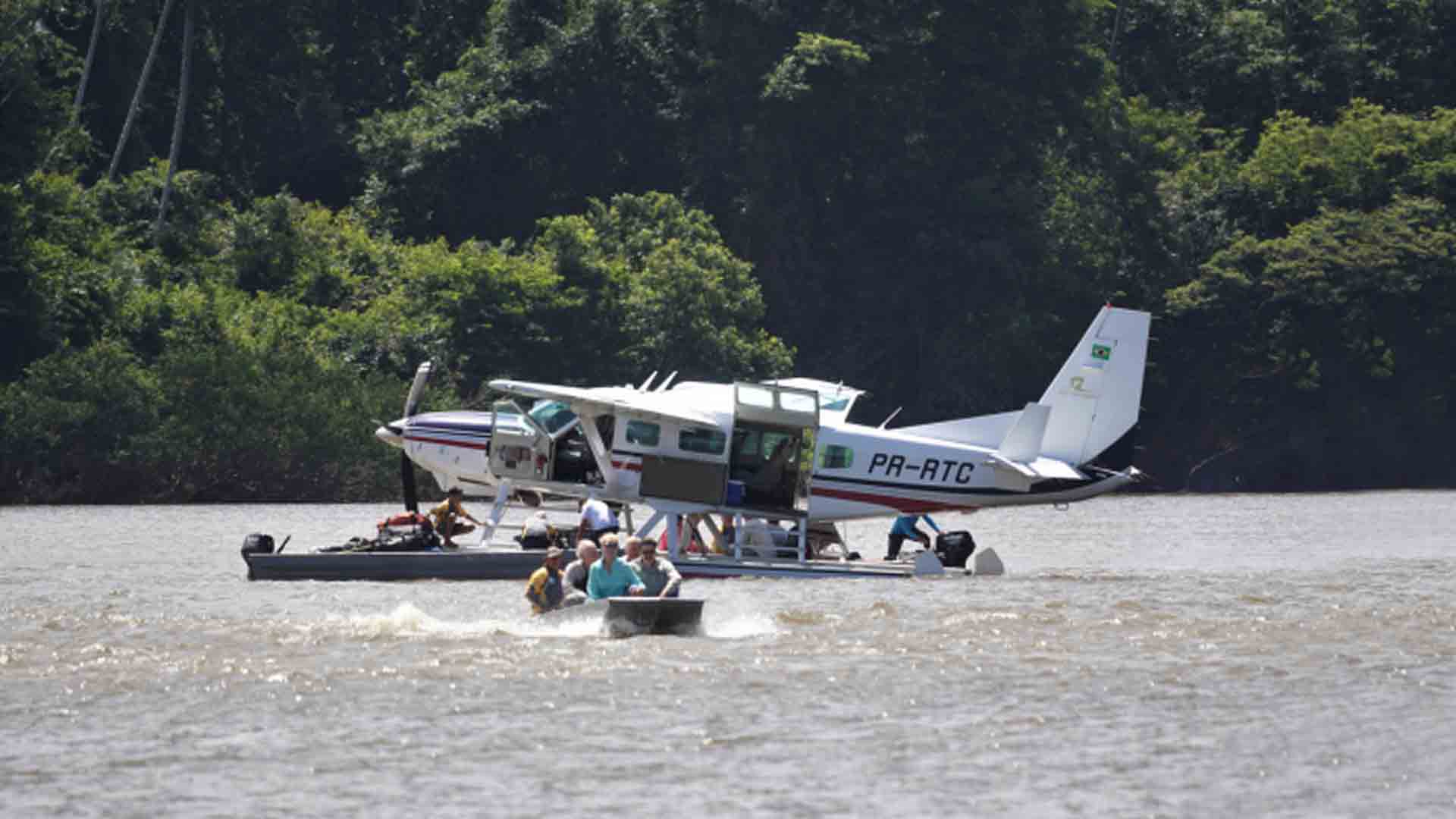 Getting to the Floating Cabins:

You'll arrive in Manaus, Brazil, late on Friday evening. You'll be greeted by a Lodge representative who will drive you to a nice hotel in Manaus. Reservations will be made for you by the outfitter, but the hotel night is not included in the package. You'll have Saturday to acclimate. You can participate in a city tour or relax at the swimming pool at the hotel. Saturday evening, there is the option to meet with the group and go to dinner. Transportation is arranged. At about 7:00 a.m. on Sunday, you'll be driven to the local airport for the two-hour floatplane flight to the Novo River. There is a 35-pound baggage weight limit for the floatplane, and soft-sided baggage is required. You'll arrive at the river late morning. Once you are settled in camp, you'll get your gear ready for the week. After lunch and a brief orientation, you'll take in an afternoon of guided fishing.
Day of Departure:  After breakfast on Sunday, you'll fly back to Manaus. There is usually enough time to get a day room at the hotel to have a place to relax and wait for the evening flights back home. There is a shopping mall within walking distance. Guests often meet for dinner before heading to the airport.

Reception at the international airport in Manaus, all necessary ground transfers in Manaus, roundtrip floatplane flight between Manaus and the Camp, double-occupancy floating cabin accommodations, all meals and beverages (including alcohol) at the Camp, limited Wi-Fi, daily laundry service, guided fishing, a fishing license, and upon request, our eBook Fly Fishing for Peacock Bass by Larry and Guy Schoenborn.

Bucket List Fly Fishing Policies:
Deposit:  A 50% deposit per person is required at the time of booking. The final payment is due 90 days before your trip. If this installment is not paid when due, the operator reserves the right to treat and consider the reservation as canceled.
Beginning December 10, 2020, Fishing with Larry will add a 2.5% convenience fee to all credit card transactions.
Cancellation Policy:  All payments are NON-REFUNDABLE. There are no refunds or rollovers to future dates. Travel insurance is strongly advised.
Fishing with Larry strongly recommends purchasing trip insurance. Click here for our Travel Insurance page.