Las Pitras Lodge, a world-class fly-fishing operation, is near Los Alerces National Park with short drives to famous Patagonia rivers like Rivadavia, Carrileufu, Chubut, Arrayanes, and the Futaleufu Lakes region and some of the most pristine watersheds of Argentine Patagonia. 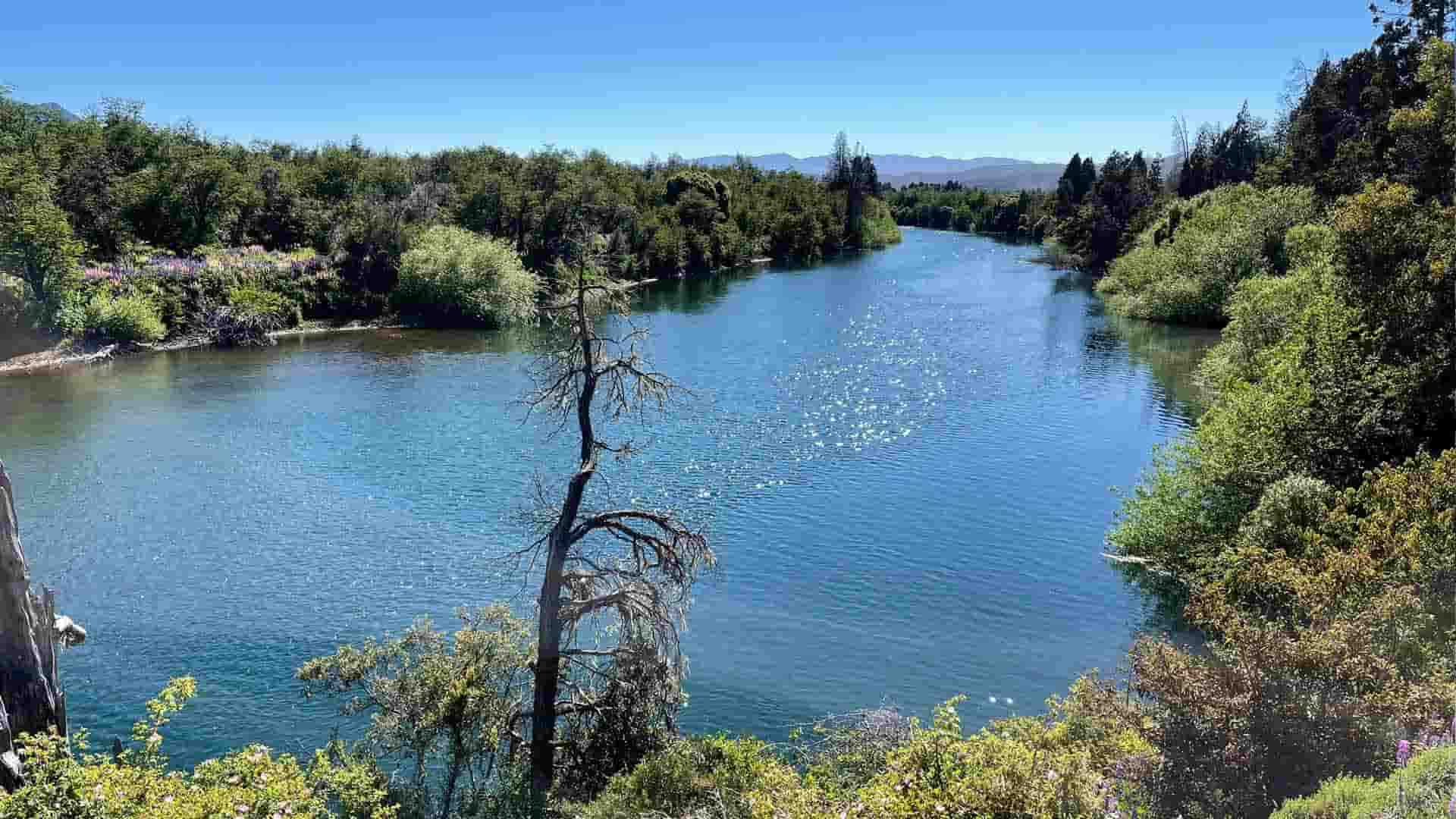 Los Alerces National Park in central Patagonia is renowned for its beauty. Founded in 1937, the Park boasts numerous mountain lakes and rivers with wild trout. From the Lodge, you can stalk large brown trout on a crystal-clear spring creek, float fish for the day, or fish lakes in the area for big brook, brown and rainbow trout, plus landlocked Atlantic salmon. 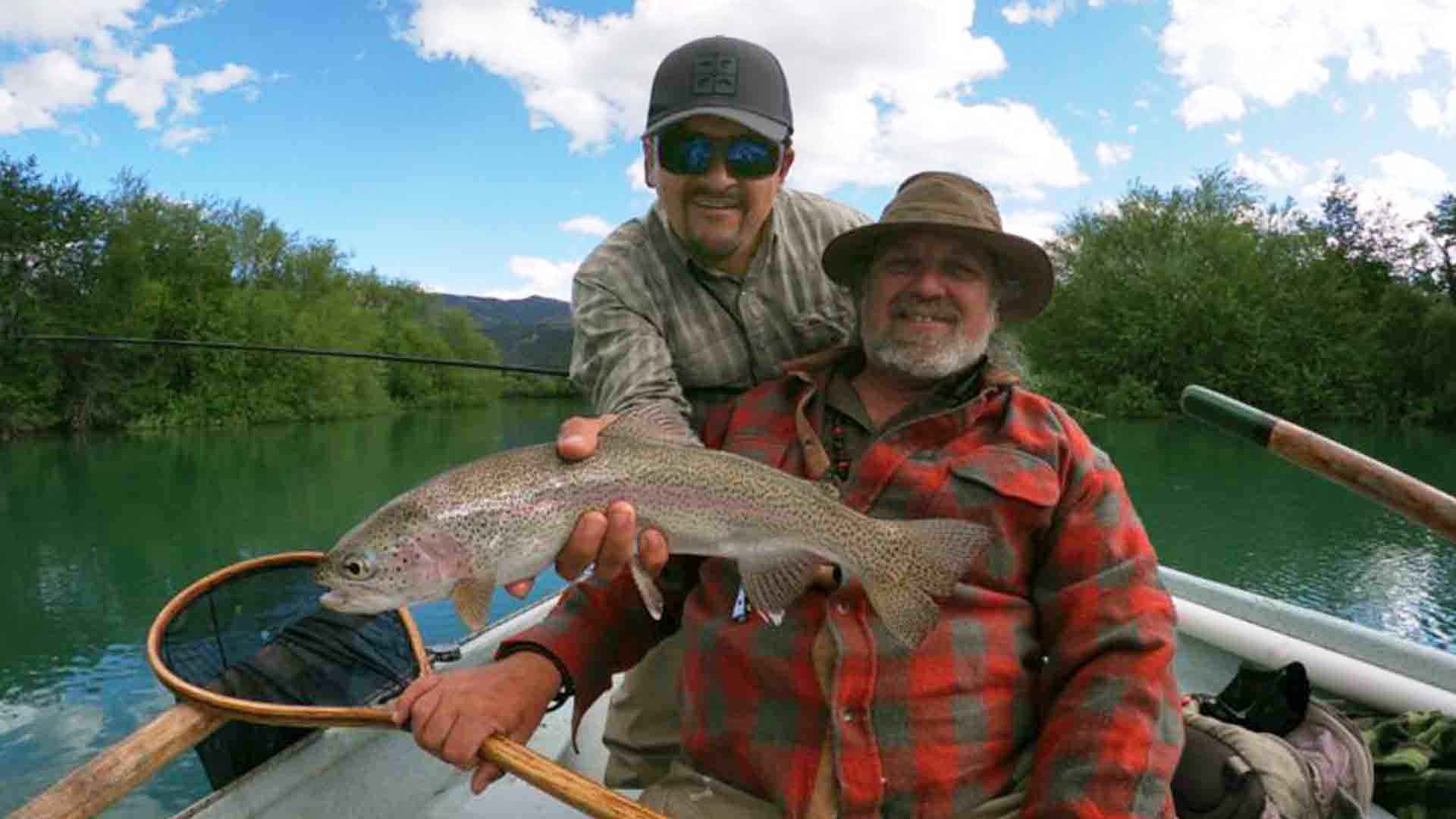 Season:   The Lodge is open from November 1 to May 1.
Travel Time:   The guides drive anglers in Toyota HiLux trucks to the fishing areas. Most fishing is a 45-minute to one-hour drive from the Lodge.
Guides:  The owner Fabian Philipp and his guide team will do their best to provide you with an enjoyable trip. Two anglers per guide. All guides speak adequate English. You'll get in 7 to 8 hours of guided fishing each day.
Methods:  You'll mostly drift fish the rivers for a more productive and comfortable experience. You'll stop and wade on some productive beats. You'll also lake fish for wild trophy trout. The Lodge practices catch-and-release fishing.
Equipment:  No equipment is provided. A rod, reel, and line rental is available for $150.00 per week. A combo package of 20 flies is $40.00 at the Lodge. A detailed list of what to bring is included in our confirmation packet.
Fishing License:  A fishing license is included in the package. 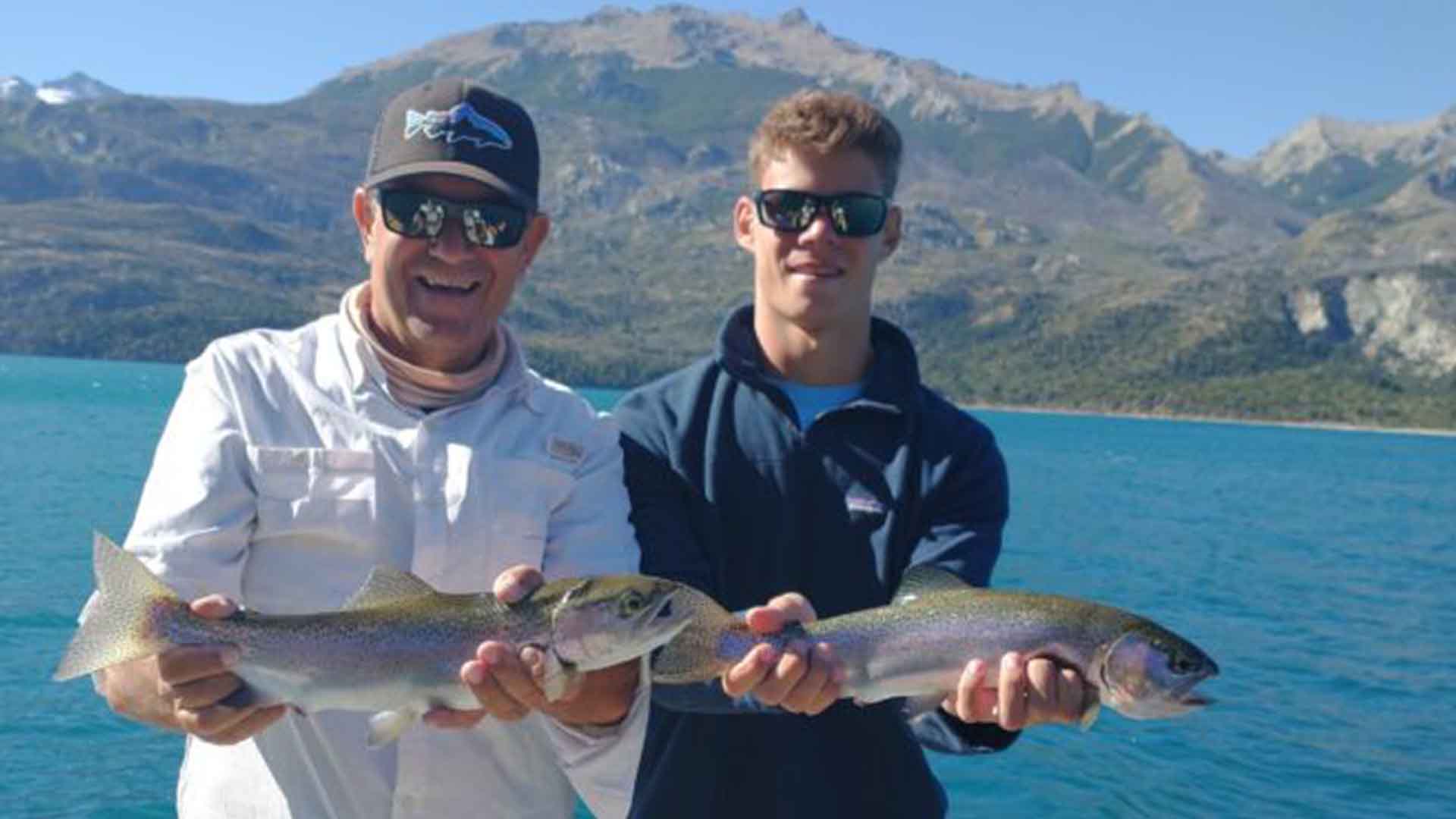 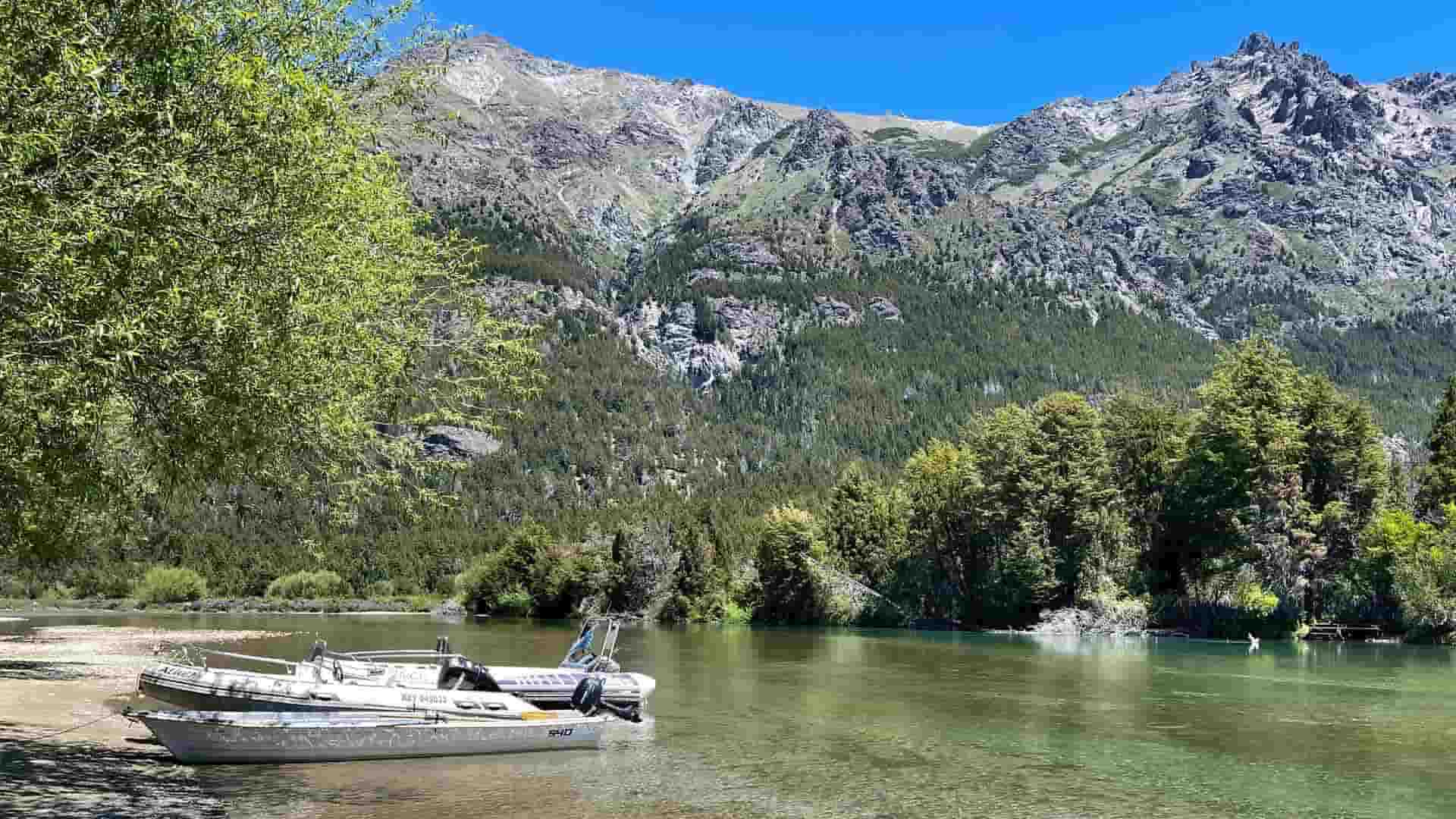 Day 1 - Your Arrival at the Lodge

After your flight from Buenos Aires to Patagonia, the guides will greet you at the San Carlos de Bariloche airport and drive you to Las Pitras Lodge, a two-hour drive.

The Rivadavia contains rainbows, browns, brook trout, and landlocked salmon and is considered one of the most beautiful rivers in the world and possibly the crown jewel of Argentine fishing. It flows from Rivadavia Lake five miles until it reaches Green Lake. The fishing is challenging but rewarding as the fish average over 18 inches and pull like freight trains! The water is gin clear, and beech trees and fallen logs line the banks, often making casting a challenge. Wade and sightfish with small nymphs. Cast large dries over the logs or chuck streamers under the tree-lined banks to entice the large browns. You’ll float the four-mile-long river in one day. You may also have the chance to sightfish one of the river’s small spring creek tributaries before finishing your day on the shores of Lago Verde.

The Rio Carrileufu is born from Lago Cholila and is home to wild trout and landlocked Atlantic salmon during the early and late season. The river is best fished by floating in one of the lodge’s rafts, although there are opportunities to get out and wade productive runs and riffles. The Carrileufu flows approximately twenty miles before entering the Lago Rivadavia and Los Alerces National Park.

The Arrayanes, a six-mile-long river, starts in Lake Verde, runs through Los Alerces National Park, and ends in Futaleufu Reservoir. Early and late in the season, the river has a healthy population of browns, rainbows, and landlocked Atlantic salmon and is best fished with dries and streamers.

The Rio Chubut is a small willow-lined stream that flows east to the Atlantic Ocean. You'll float a 15-mile stretch casting to the banks with dry flies. Day 4 is a long and productive day.

Lake Verde, a one-mile-long reed-lined stream, is also inside Los Alerces National Park. These reeds are home to numerous food sources for trout, such as dragonflies, mayflies, caddis nymphs, baitfish, crayfish, and snails. Cast a large dry fly to the banks for nice trout.

Fishing Lake Cholila is very similar to Lake Verde but much larger. Fish the reeds, submerged logs, and banks. Dry flies or streamers are best. Lake Cholila offers a surprising number of sizeable fish. On Day 8, you'll depart the Lodge. 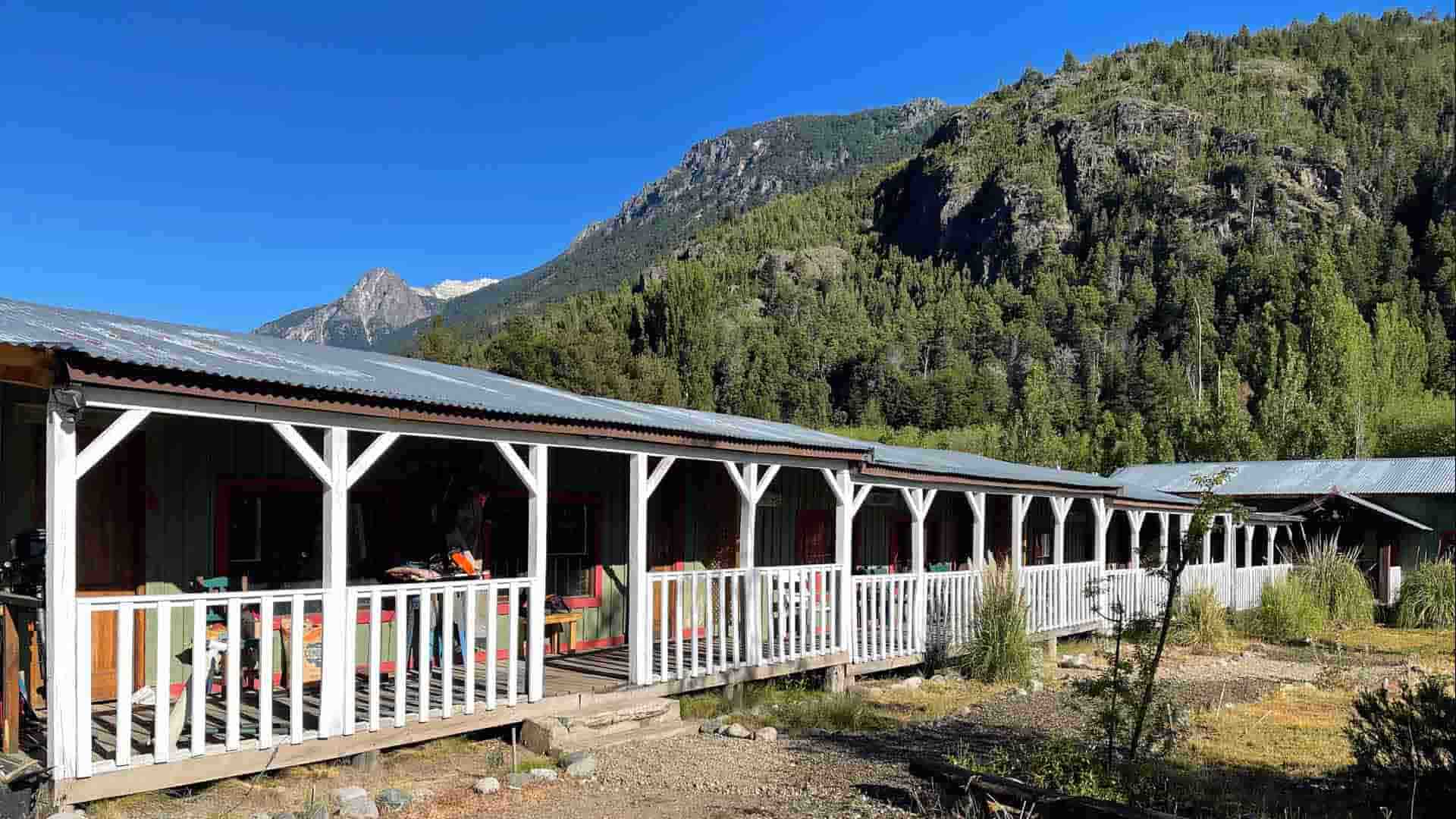 The family-run Lodge has a large dining room and common areas, plus an outdoor swimming pool with views of a beautiful garden and the Epuyen River. Fabian, the owner and head guide, built the Lodge. 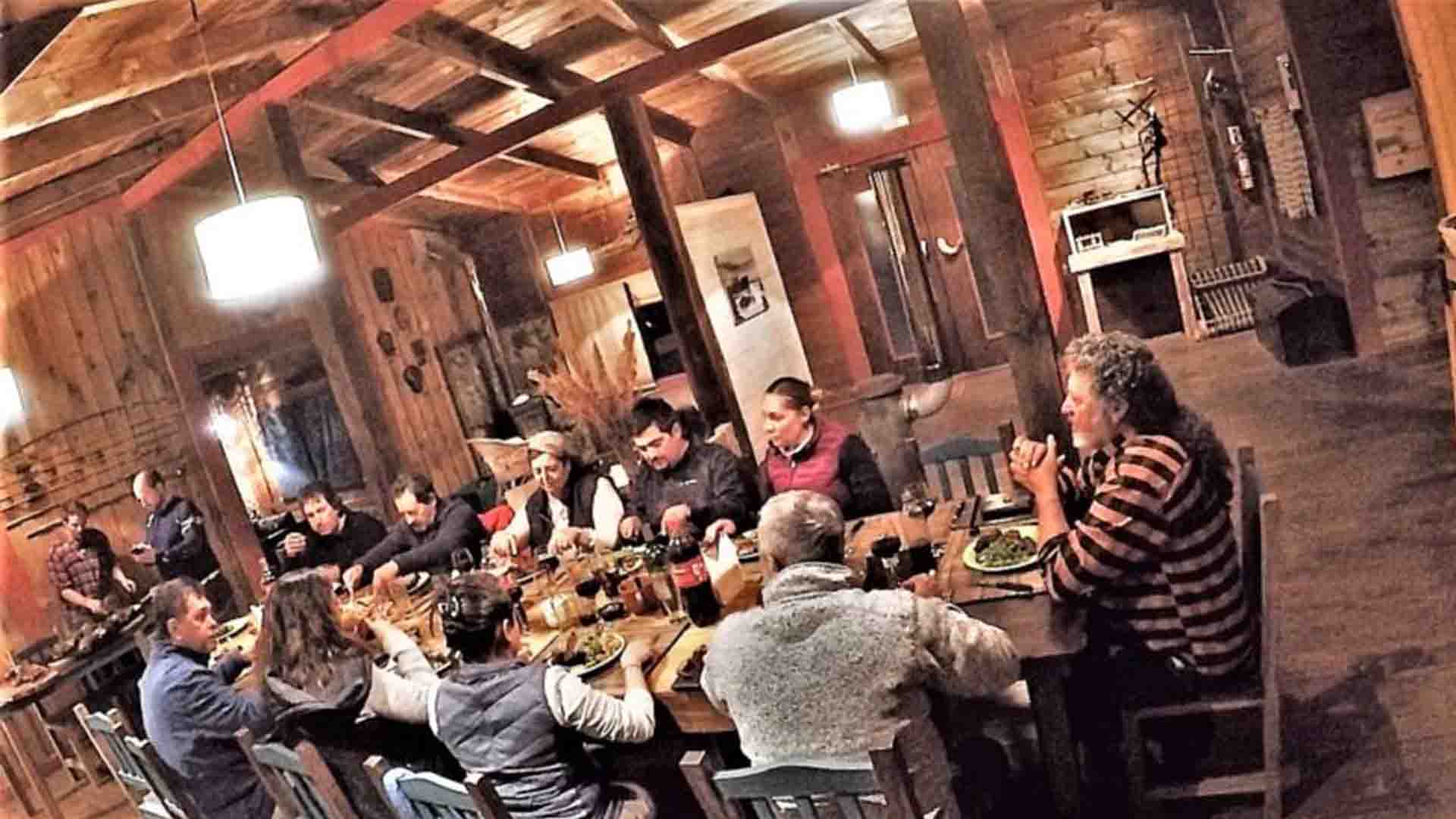 Four Bedrooms at the Lodge

The Lodge hosts eight anglers per week in four rooms with private bathrooms.

Communications:  Wi-Fi is available throughout the lodge and outdoor sitting areas.
Electricity:  220 volts/ 50 Hz. The plugs used in Argentina have two rounded prongs. You may not need a converter if you bring any electric device such as a laptop, an electric shaver, iPod, Cpap, etc. Make sure your device is dual voltage 220/110. The Lodge has complimentary adapters.

Getting to Las Pitras Lodge:

From Miami, Dallas, Houston, or Los Angeles, you'll take a direct flight to Buenos Aires (about 9 hours. from Miami or 11 hours. from Dallas), arriving early the following morning. After clearing customs, you will need to take a 45 to 90-minute ground transfer (not included) from the international airport to the domestic airport. Allow several hours for this transfer due to traffic fluctuations. You'll take a 2.5-hour domestic flight to San Carlos de Bariloche. Upon arrival, the guides will greet you and drive you to the Lodge, a two-hour drive.
Most guests choose to spend their first and last evening in Buenos Aires; hotels and meals are not included in the package. A list of recommended hotels is provided in our confirmation packet.

Package Does Not Include:

Airfare, hotels and meals in Buenos Aires, fishing equipment (weekly rental of $150.00 for rod, reel, and line and $40.00 for a 20-pack of flies), gratuities, personal items, Global Rescue, travel insurance, and anything not covered under inclusions.

LAS PITRAS LODGE
Deposit:  A 30% deposit is required to book a reservation. The remaining balance is due 90 days prior to arrival. As of December 10, 2020, Fishing with Larry will add a 2.5% convenience fee to all credit card transactions.

Cancellation Policy:  All deposits and payments are non-refundable. Your deposit will be held for one year to reschedule your trip. If you have not rescheduled during the one-year period, your deposit will be forfeited. We strongly recommend purchasing trip cancellation insurance.
Fishing with Larry strongly recommends purchasing trip insurance. Click here for our Travel Insurance page.