Providence Atoll lies 400 nautical miles south of Mahé and has remained mostly untouched, with fewer than a thousand visitors in the past century. After a recent six-year suspension on fishing, the Atoll reopened in 2015 with FlyCastaway Fishing Company. Providence is the largest fishable atoll in the Seychelles, and the least explored. 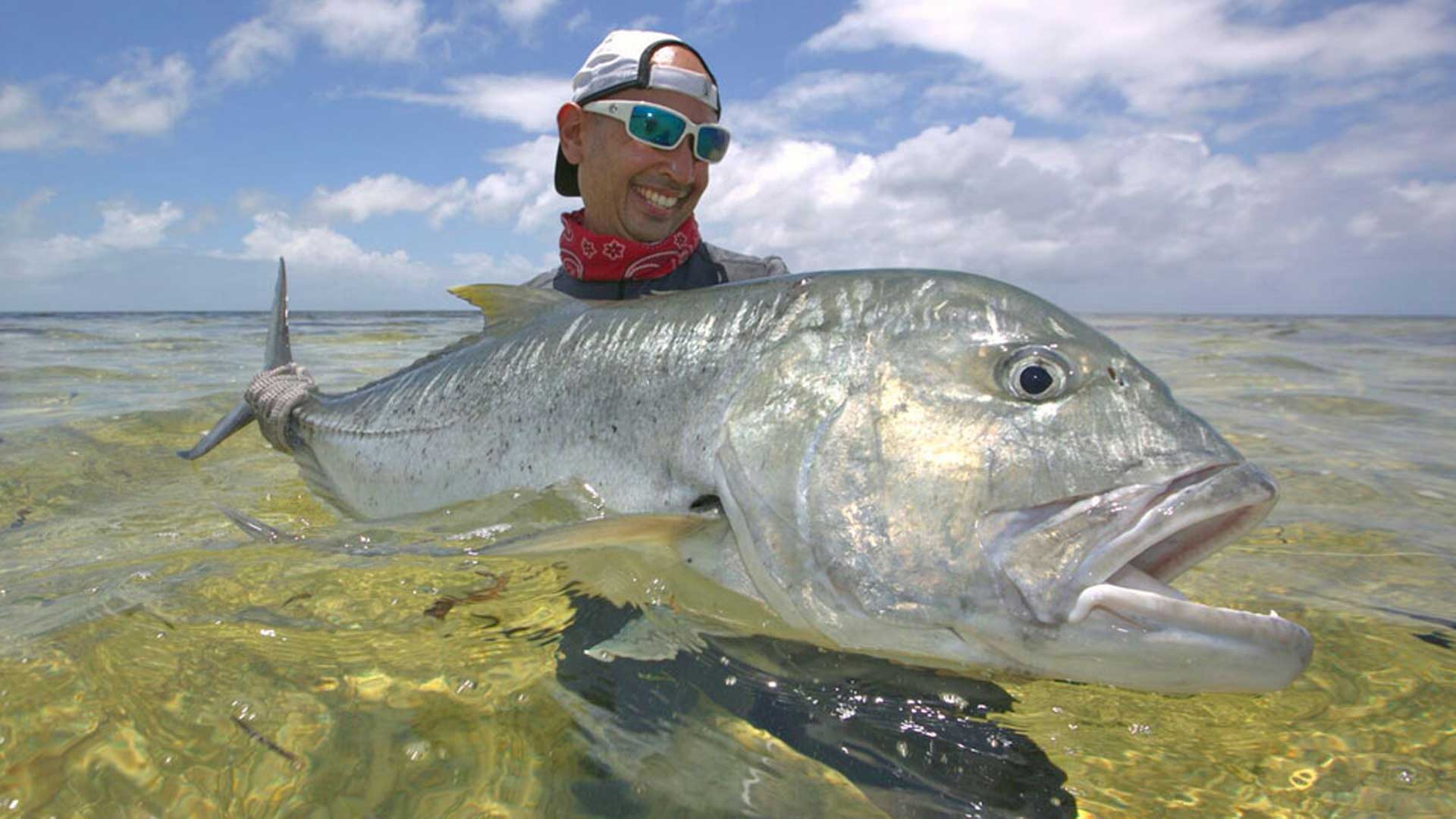 Wading:  Most of the fishing is wading. Anglers cover up to two miles a day over challenging terrain, so footwear is very important. Protective flats wading boots must be worn (hard rubber soles with ankle support). Guests will not be taken on the flats without proper footwear.
The Outfitter:  FlyCastaway Fishing Company has specialized in elite fly-fishing trips since 2004 and also operates:
• Farquhar Atoll 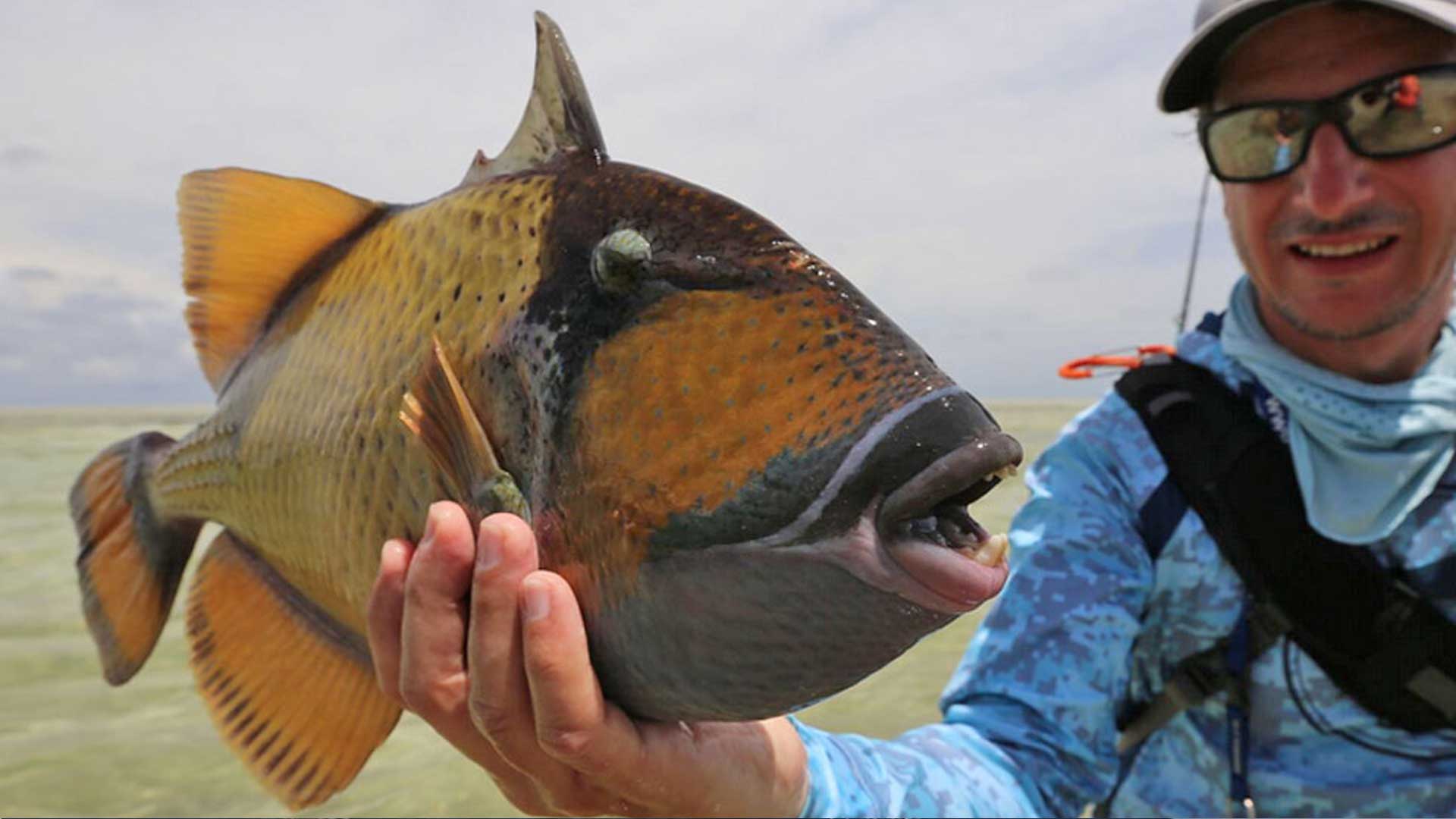 2021 Season:  There are two seasons:  March through May and October through December.
Group size:  12 anglers per week, three anglers per boat and guide.
Guides:  World-class fly fishing guides. English-speaking and personable; these four young men are passionate about the Atoll. They each have a skipper's license, have taken a marine safety course, and basic first aid training.
Fishing Equipment: is not included in the package. A detailed list of what to bring is in our confirmation packet.
Fishing Licenses are not included in the package.
Boats:  Four locally built mini-Mahé panga-style tender boats are stored and transported on the liveaboard vessel to the Atoll. While you'll mostly be wade fishing, the boats are used for transport from the vessel to the fishing grounds and for bluewater fishing. 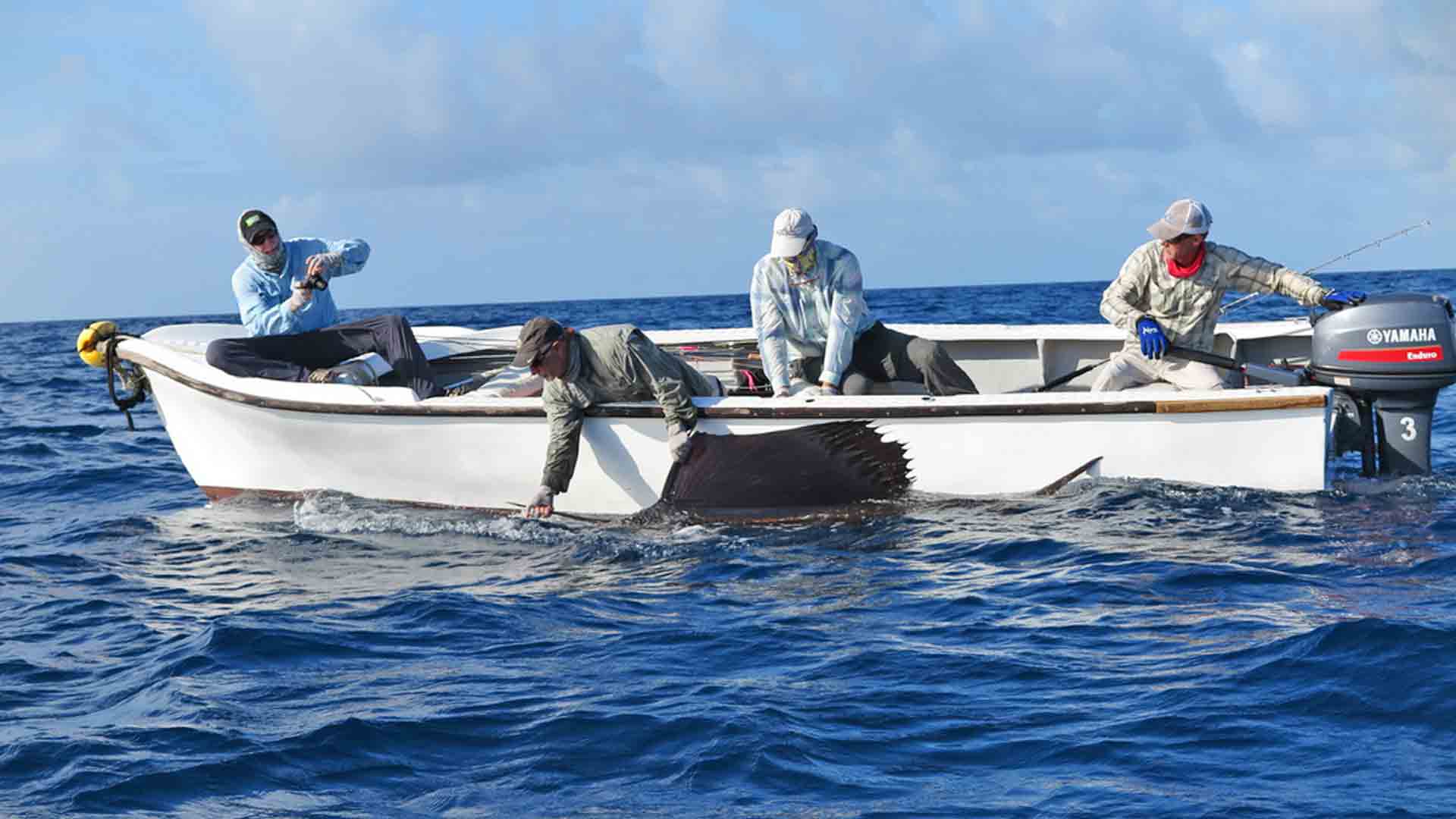 Bluewater:  At most anchorages, bluewater begins very close to shore, so it is possible to fish these waters from tender boats. Surface fish for dogtooth tuna, barracuda, wahoo, yellowfin tuna, sailfish, and an occasional marlin. 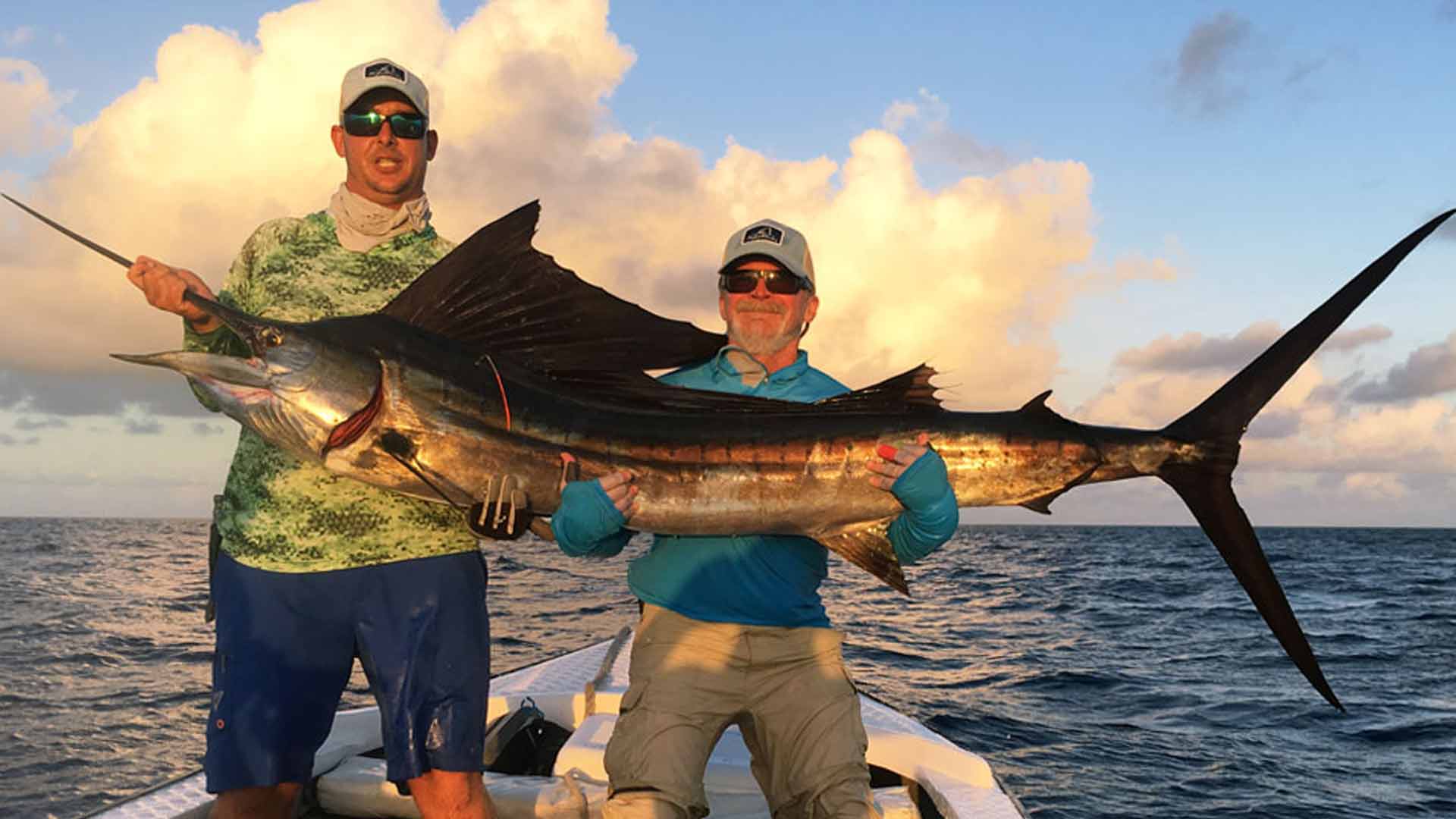 Guide and our client Bruce Tyson with sailfish. 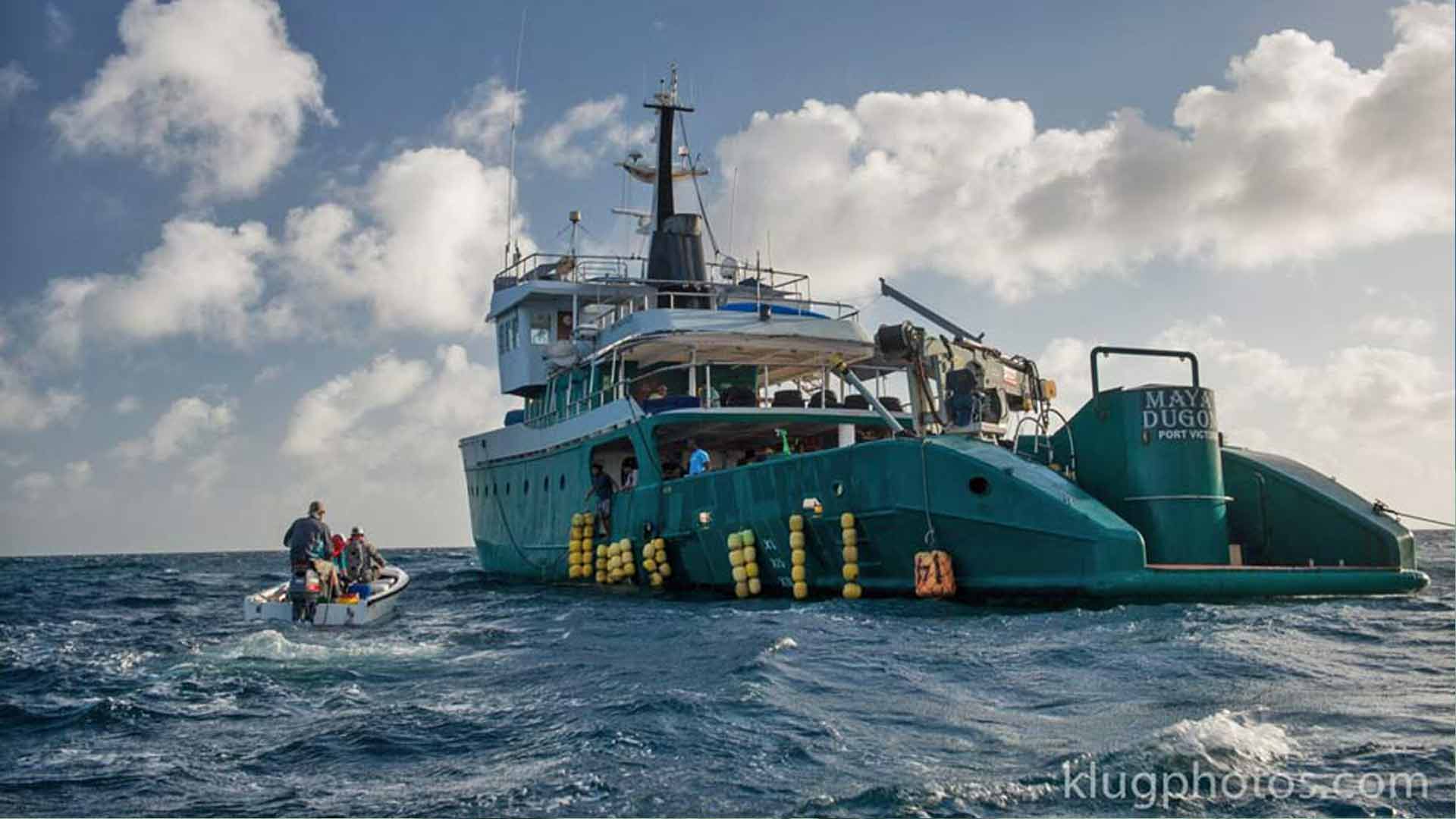 The Liveaboard:  Maya’s Dugong is a 135-foot expedition vessel. She sleeps 12 guests in six double-occupancy, air-conditioned cabins with private bathroom and shower. Laundry service is provided twice a week. 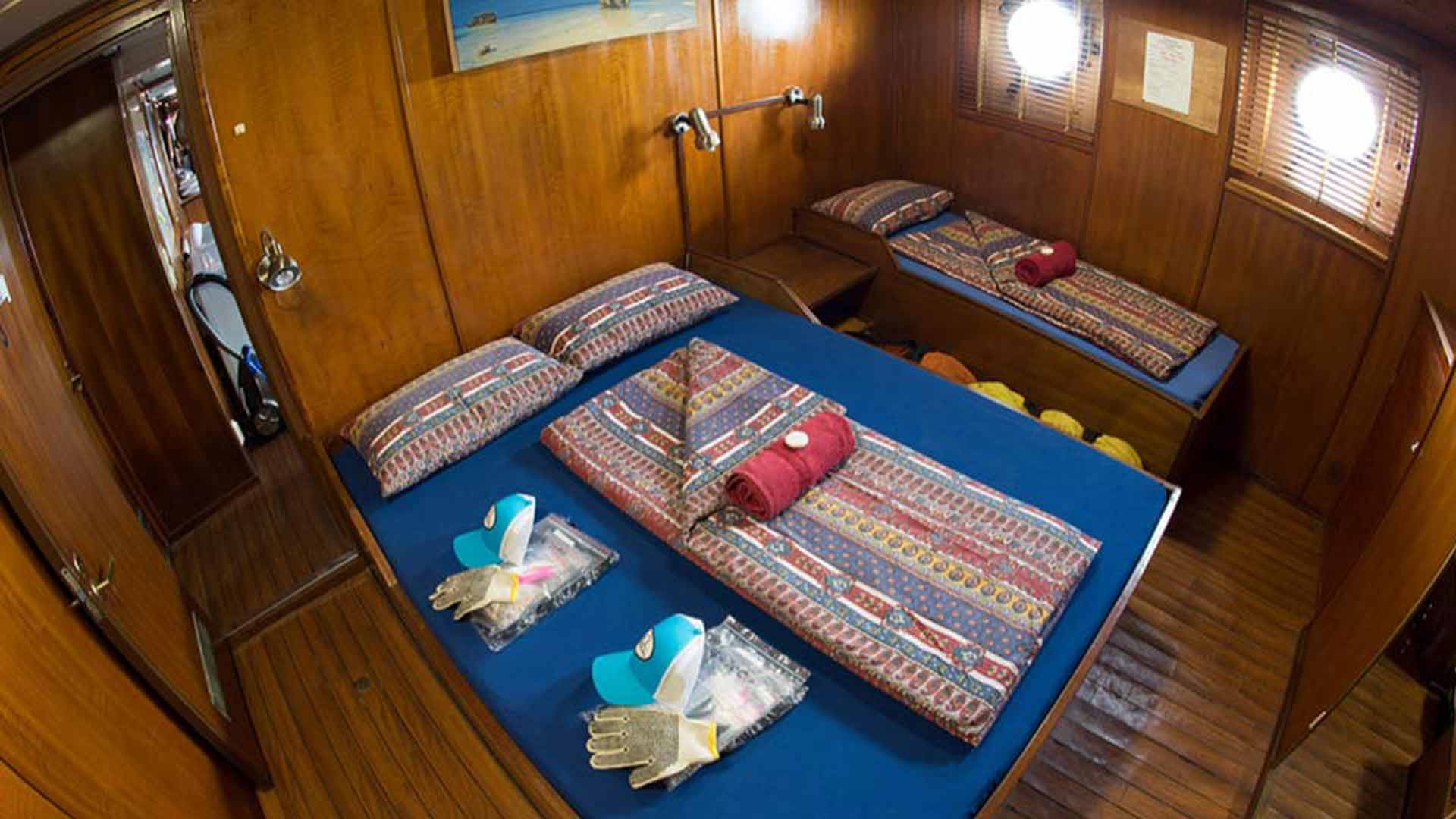 The liveaboard also has a large air-conditioned dining area and lounge, several outdoor decks, a spacious bridge, and an observation deck. The Maya’s Dugong boasts the most experienced crew in the region. The vessel’s large back deck provides ample room for gear storage and tackle set up. The vessel is ideal for these remote Indian Ocean fly fishing adventures as she is able to store the four tender boats.
Security:  Providence Atoll fishing was suspended for six-years due to piracy in the Indian Ocean. Though the risk of attack is considered low, there is three armed security personnel on board. 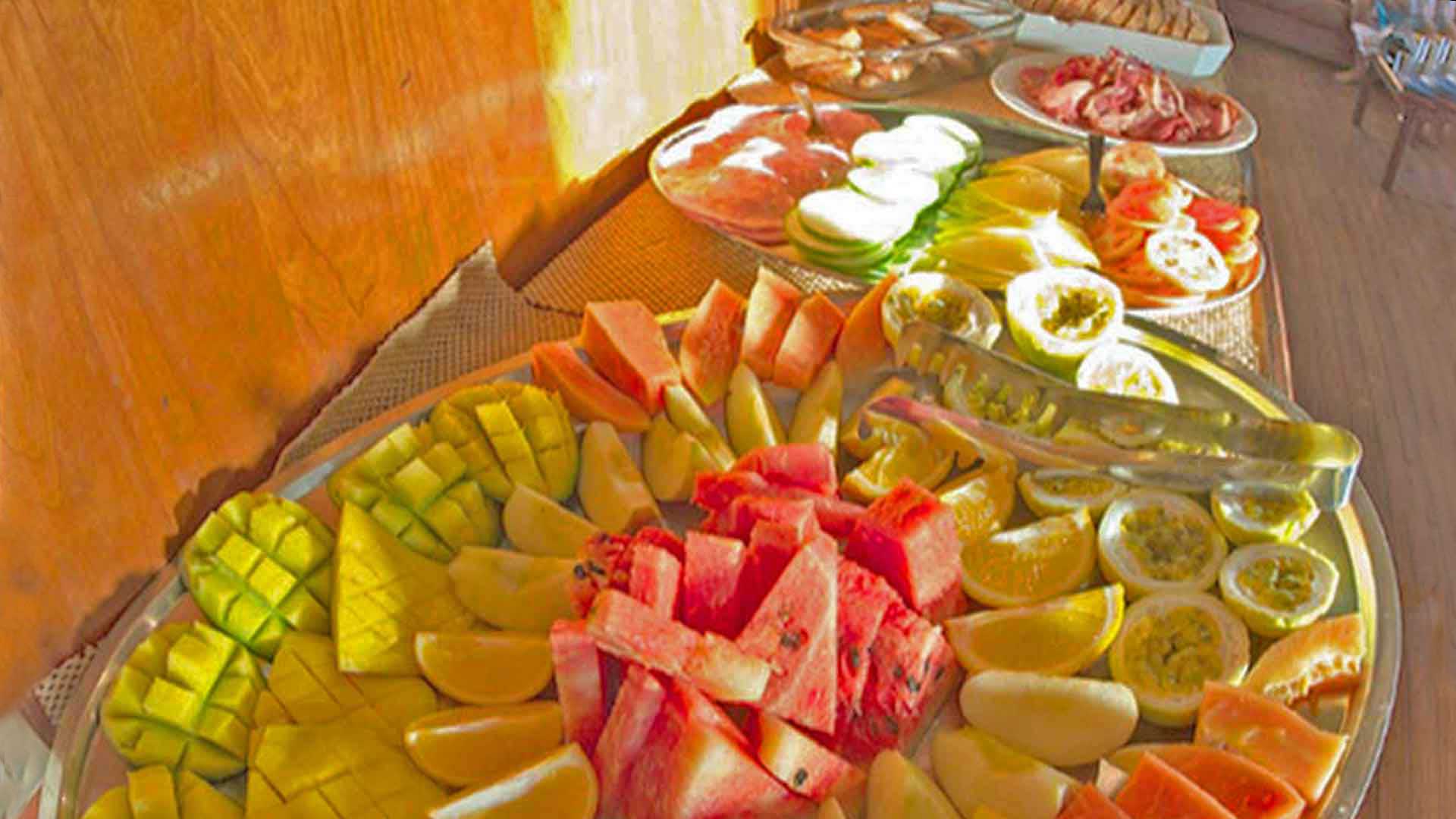 Meals:  Hot breakfasts, packed lunches, and buffet-style dinners.
Alcohol:  All beer, spirits, and wine are available for purchase on board and do not include a 15% GST. You’re encouraged to bring your own alcohol from home or the duty-free store at the airport.
Communications:  There is no Wi-Fi or cell reception on the Atoll. The Maya’s Dugong's satellite phone can be used for $5.00 per minute for both incoming and outgoing calls.

Getting to the Liveaboard:

You'll arrive in Mahé the day before the start of the trip. In the morning, you'll take a one-hour and 55-minute charter flight on a Beechcraft 1900 to Farquhar Atoll. From the Farquhar airport, you'll take a 15-minute ride on a tractor and trailer (true island-style) to the mothership, the Maya Dugong. Once you've settled into your cabin, the liveaboard will begin the 4 to 8-hour sail from Farquhar to Providence Atoll. (The hotel night and ground transfers in Mahé are not included in the package. The roundtrip air charter Mahe/Farquhar is included in the package.)

Two Seasons:  March - May and October - December.
7-nights on the Liveaboard
and 6-days guided fishing
Two anglers per cabin
$14,100.00 per person

Upgrade to one angler per cabin
add $2,000.00
Single cabins are limited.
Book early.

Roundtrip charter flight between Mahé and Farquhar, 7-nights on the liveaboard, all meals on the liveaboard, purified water and soft drinks, guided fishing—three anglers per boat and guide, laundry service on the Liveaboard, Global Rescue Evacuation Insurance (valued at $100.00), and visitation permit fee.

International airfare, ground transfers on Mahé, hotel night in Mahé, meals and beverages in Mahé, beer, spirits, wine, gratuities for guides and boat staff, tackle, flies, items of a personal nature, satellite phone calls ($5.00 per minute), Signature Travel Insurance, or anything not mentioned under inclusions. A GST of 15% will be charged on all goods purchased on the Liveaboard.
Required Release:   All clients / participants are required to sign the “Providence Terms and Conditions” waiver in the pre-trip information sent out upon booking.

7:00 a.m.  You'll have a quick breakfast.
7:30 a.m.  You'll head out to the flats to fish the first tide.
Midday:  Anglers generally stay out on the flats with a packed lunch, especially if the prime tidal movement coincides with the lunch break. There is the option to return to the mothership for lunch if the tide allows. However, it is best arranged with the head guide the evening prior.
5:00 to 5:30 p.m.  You'll return to the vessel.
7:30 p.m. A buffet-style dinner is served. Each evening, the guides and captain figure out the fishing tides for the next day. 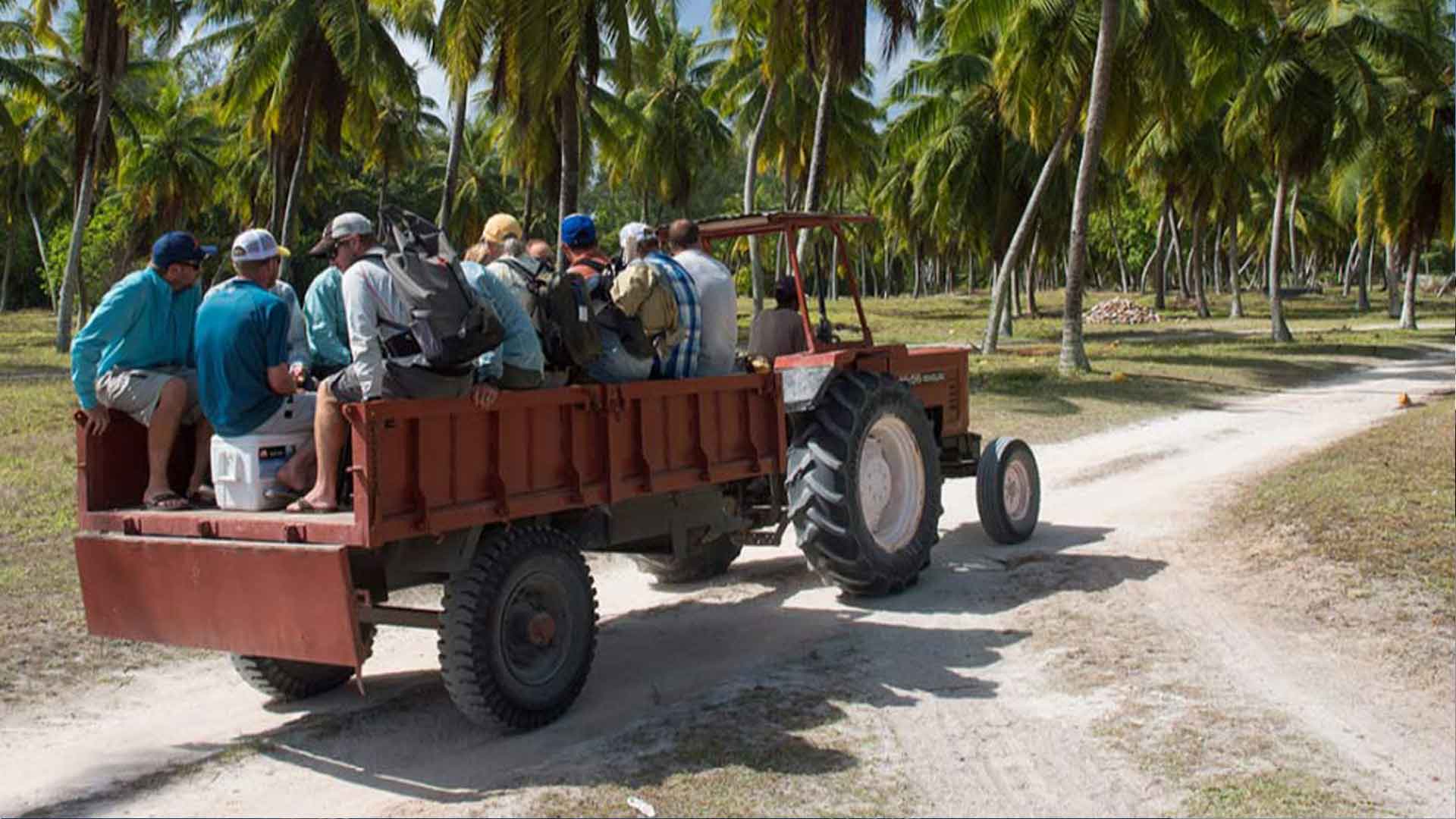 From the airport on Farquhar Atoll, you'll take a 15-minute ride on a tractor and trailer (true island style) to the mothership. 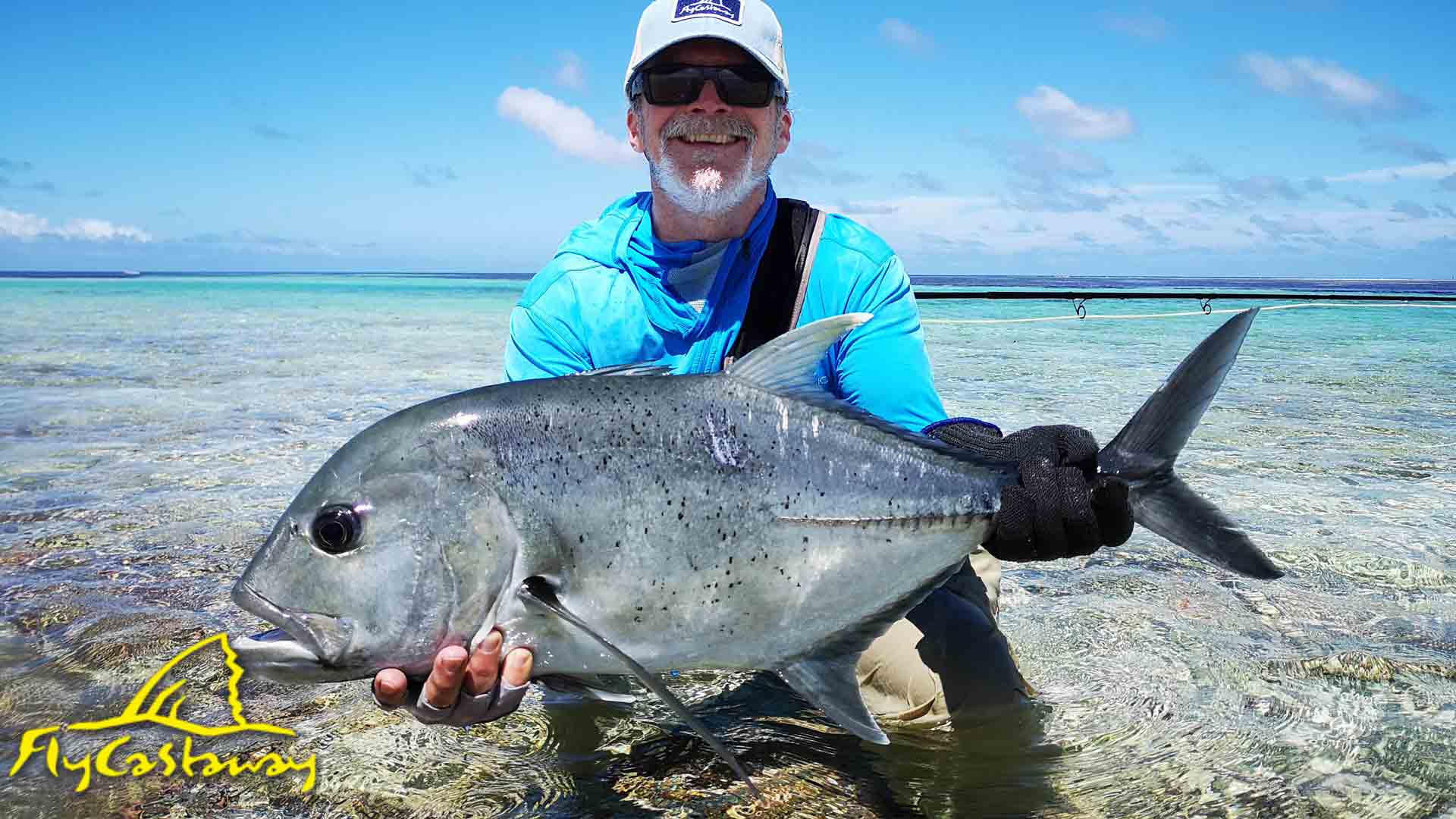 "Great trip! The GT is the most exciting fish I have ever caught. Sailfish was pretty cool too." - Bruce Tyson - 2018.

As these trips are primarily based on sight fishing the flats, having top-quality polarized sunglasses is a must. We suggest bringing two pairs with you. 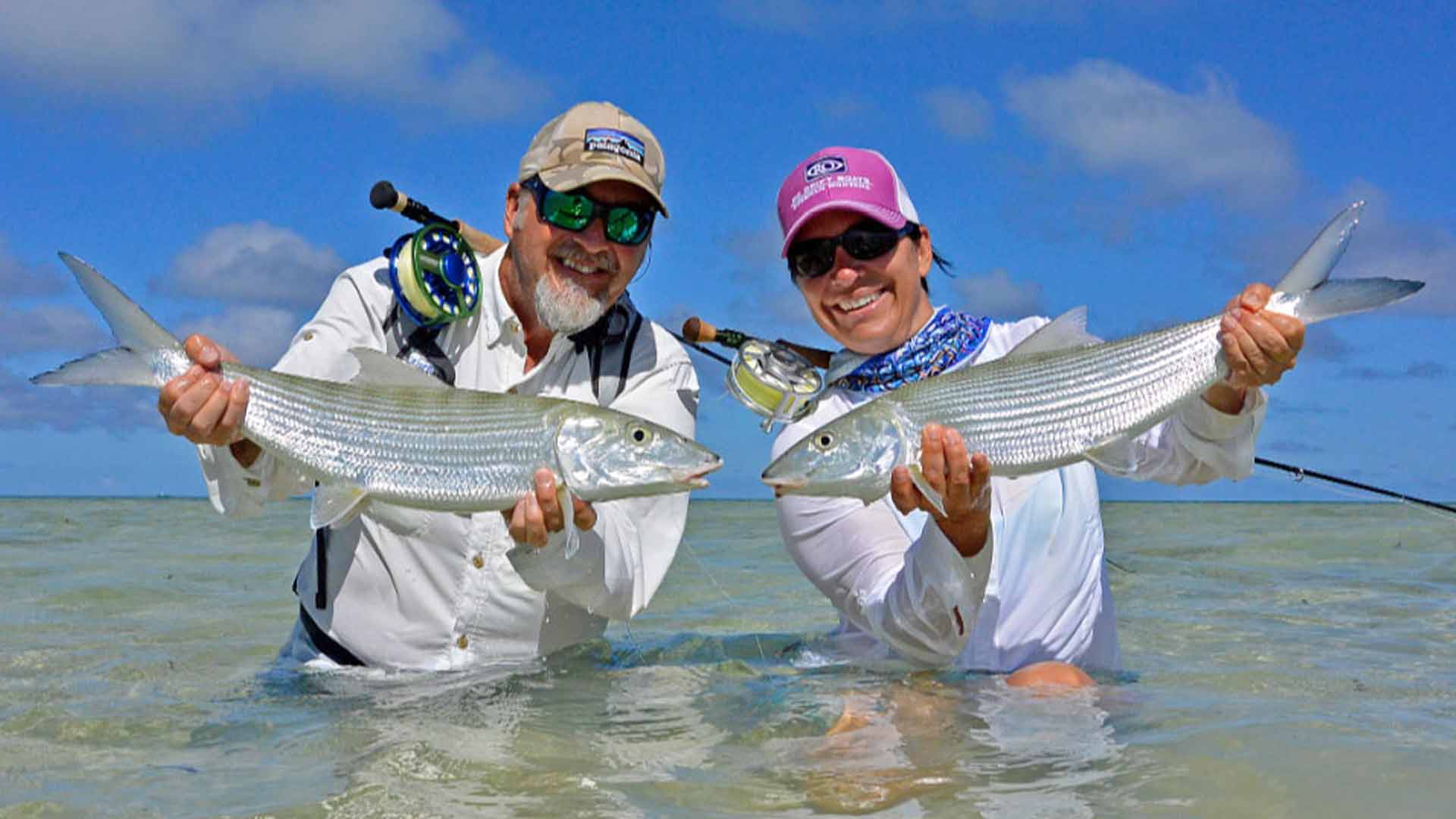 Exotic Species - Providence Atoll has it all! 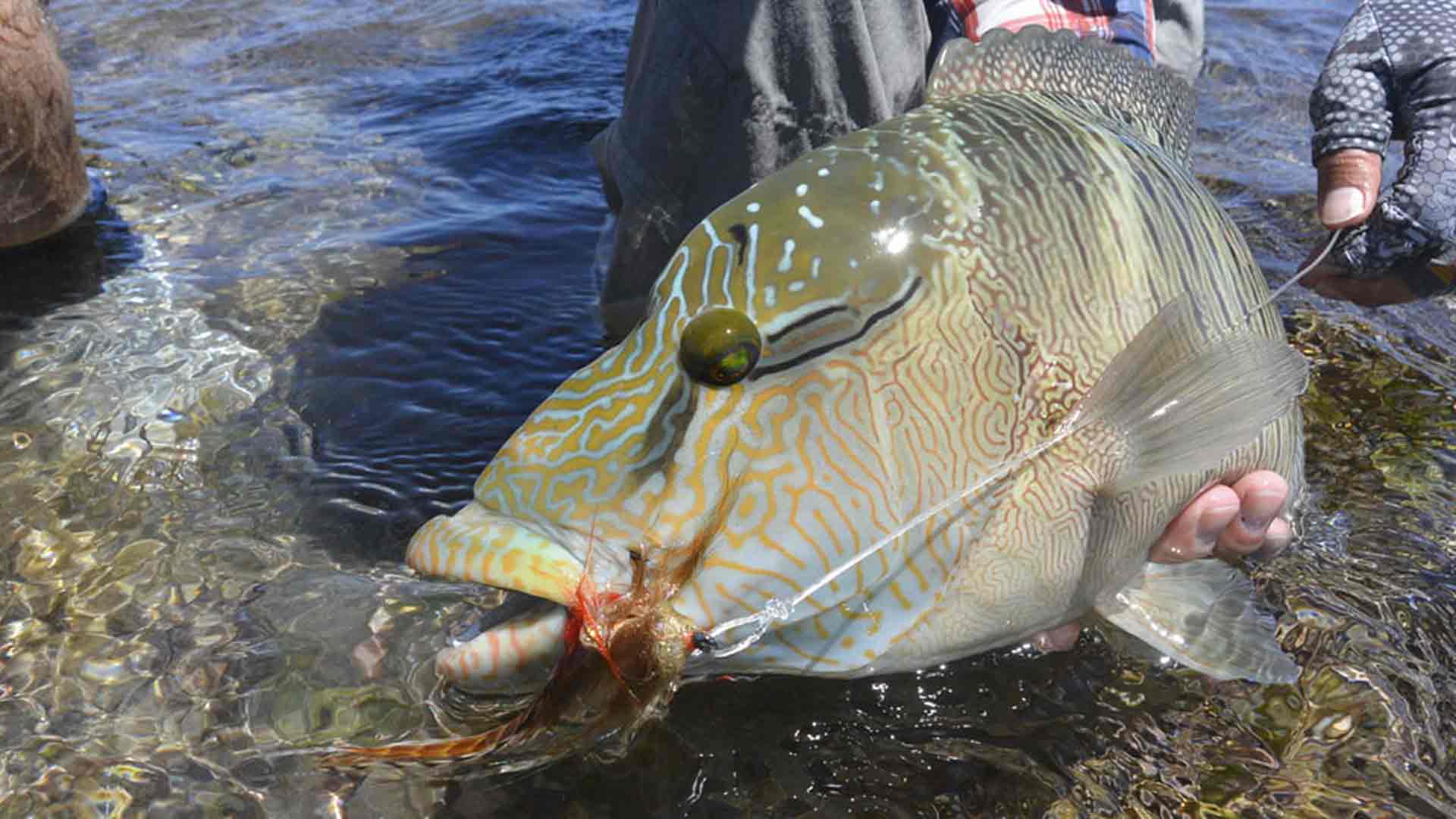 Bring a Digital Camera with 5 million or more pixels, and preferably waterproof. Bring your downloading cable so they can back up your photos every few days. Each guest is given a selection of low-res images from the week at the end of the trip. 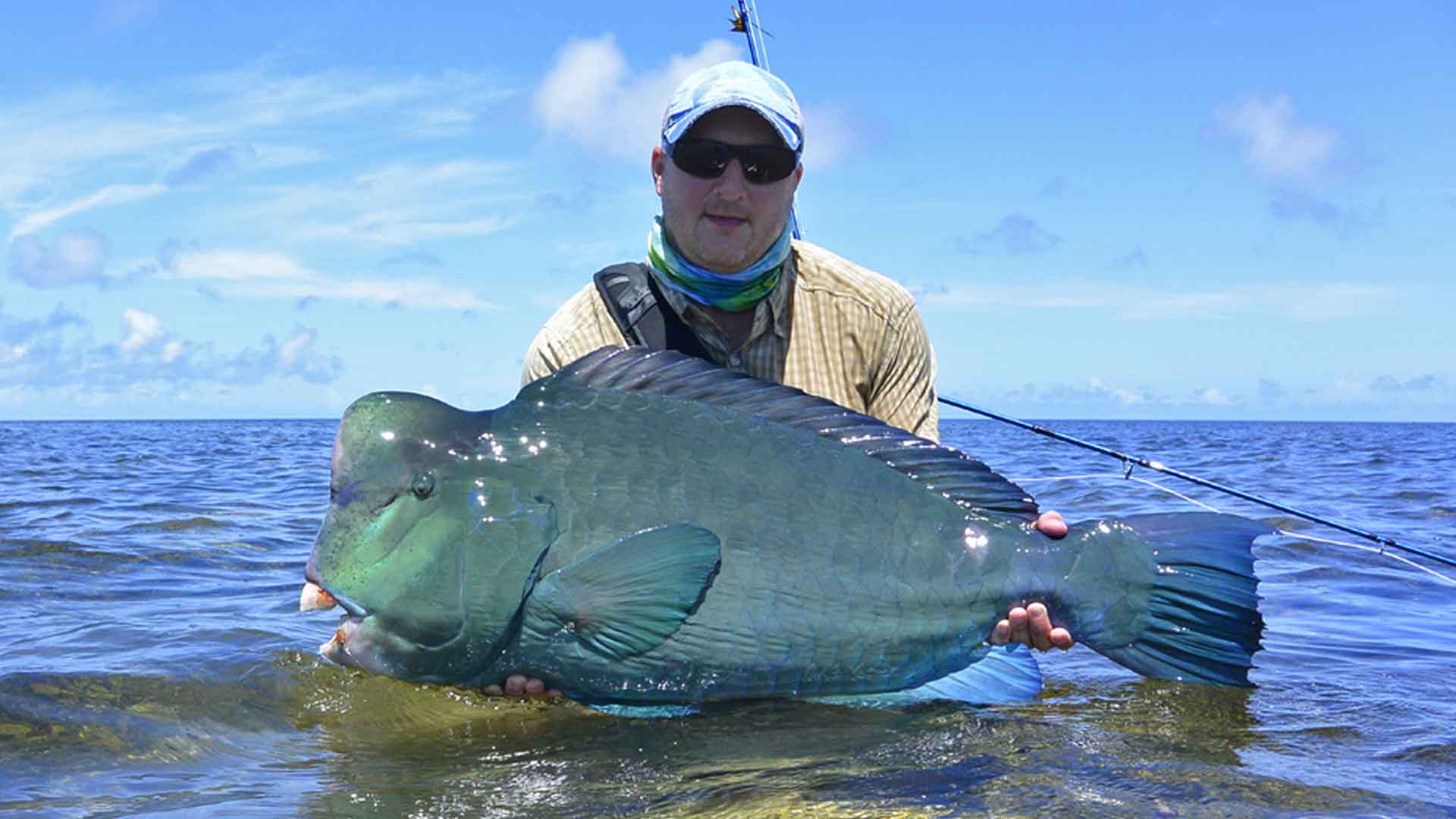 For Bonefish, Triggerfish, and Bumphead Parrotfish, FlyCastaway, the outfitter, recommends a top-quality 9ft. 9wt. saltwater fly rod such as G.Loomis NRX or G.Loomis GLX CrossCurrent. A detailed tackle list is provided in our confirmation packet. 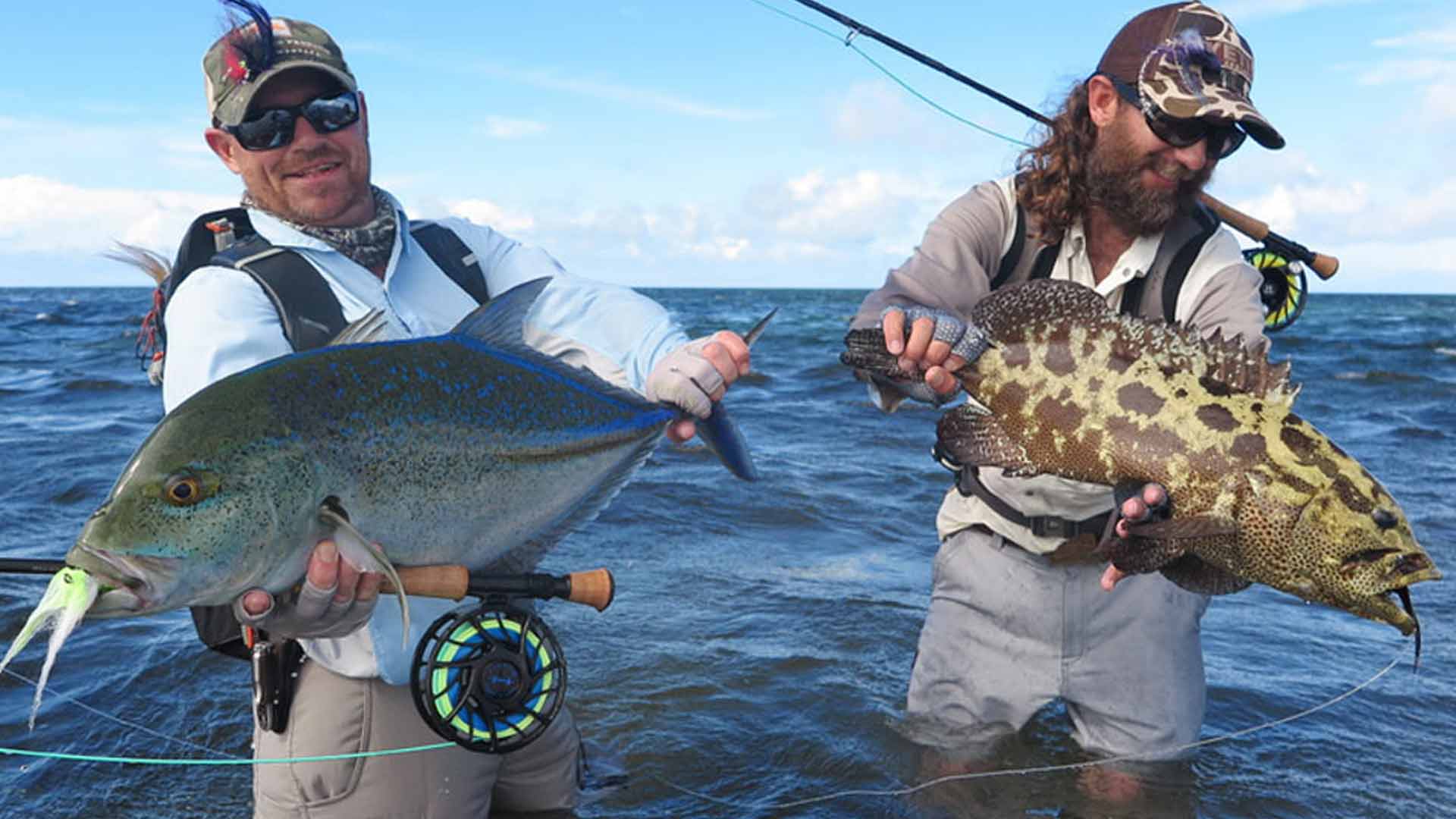 English-speaking guides have an abundance of knowledge and experience in successfully targeting all of Providence’s flats and offshore species. Offshore, target billfish, yellowfin and dogtooth tuna, wahoo, and GTs.

Arguably the finest GT flats fishery on the planet 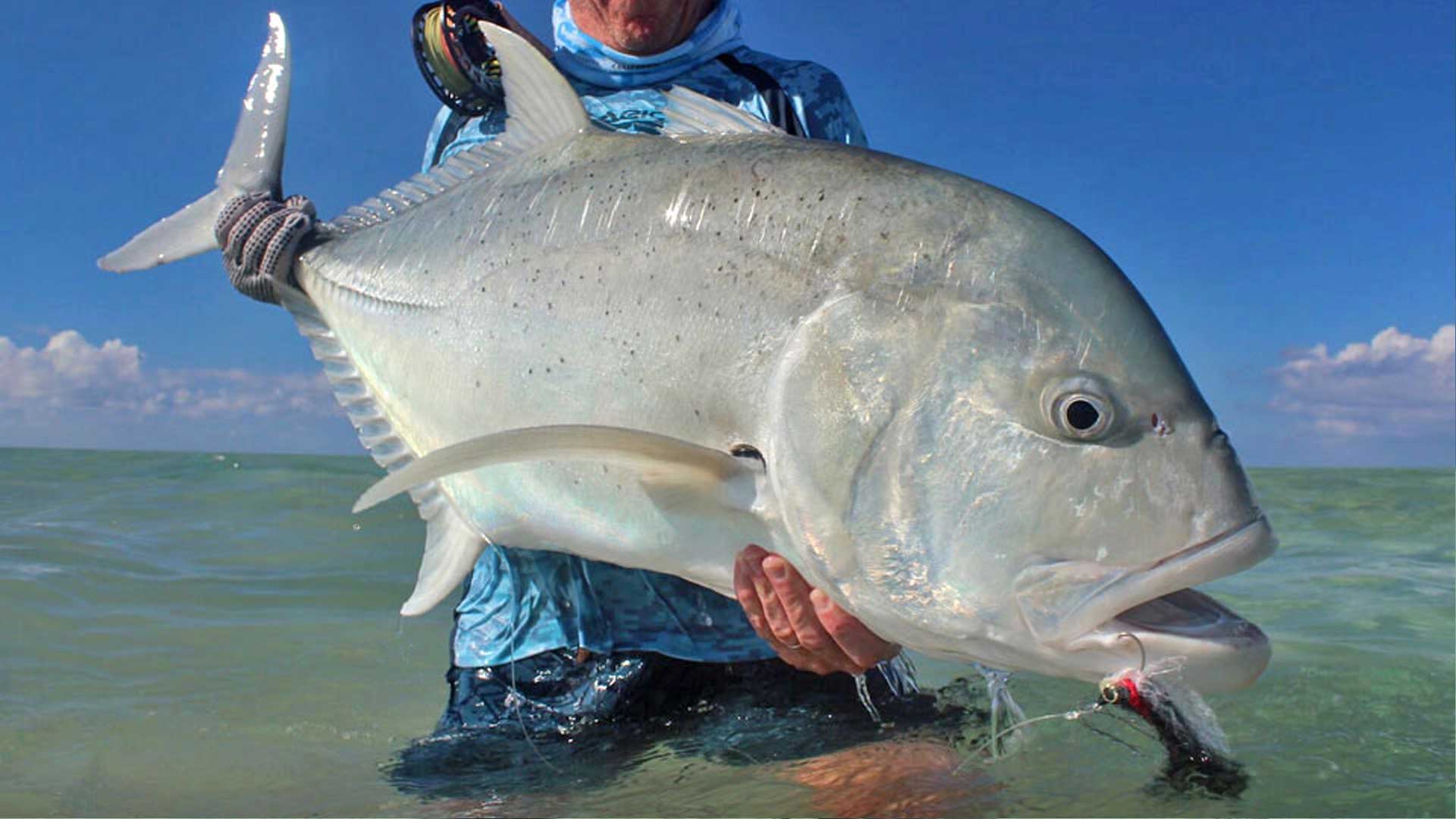 Powerful and predatory, the GT is known as the bully on the block and is known to hunt individually or in schools.