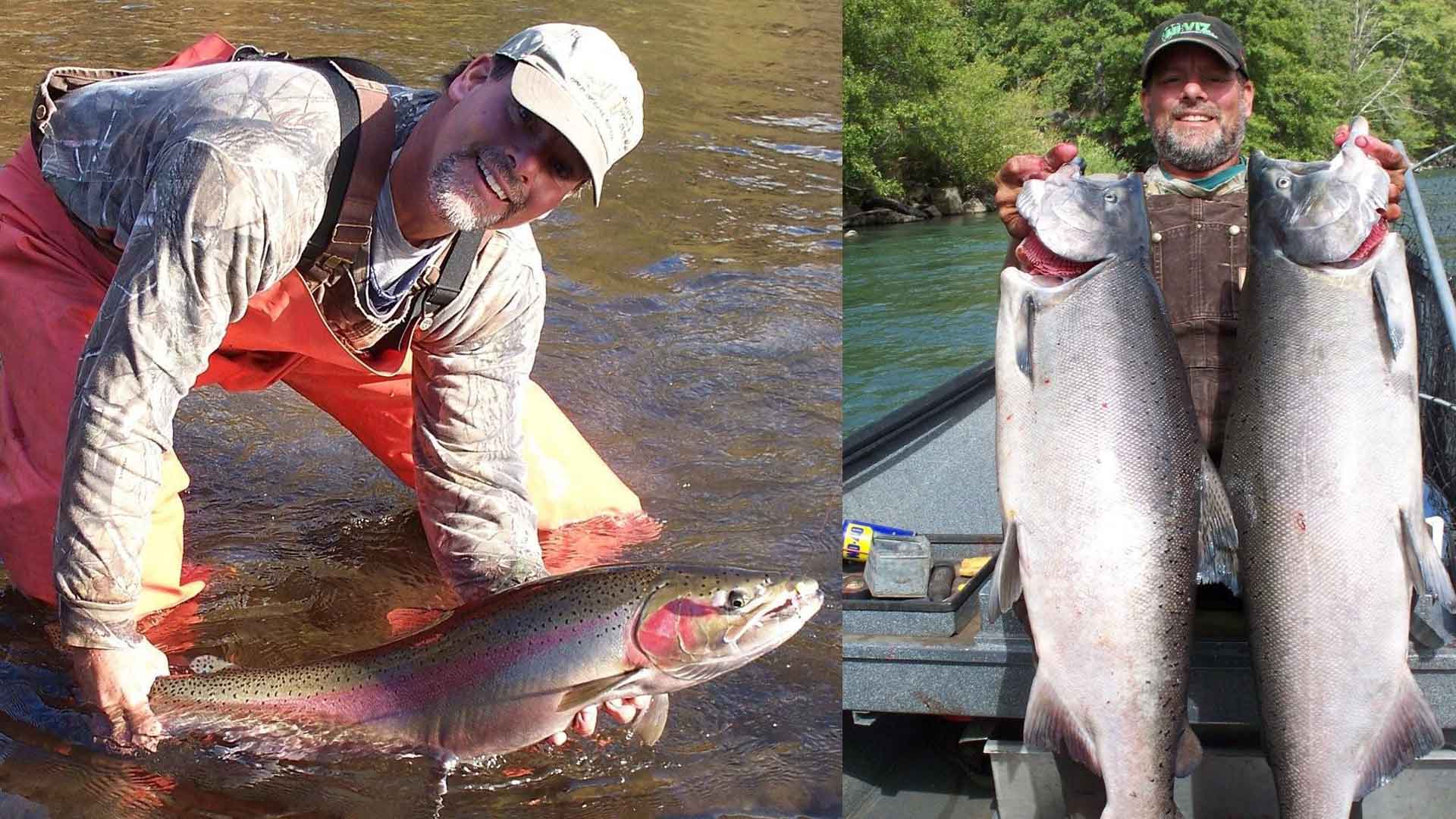 Tracy Zoller (pictured above), the owner/operator of Klickitat River Guides, has been guiding on the Klickitat since 1977. 2021 marks his 44th year guiding on this beautiful river!
Steelhead: When hooked, these Northwest prizefighting fish jump three to five feet out of the water repeatedly while screaming 40 to 50 yards of line off your reel. Peak steelhead fishing is in October. The best time for fly-fishing is late September through November. Steelhead average eight to 14-pounds, with large ones weighing in the low 20s.
Steelhead Fishing 1:19 YouTube Video.
King Salmon:  The Klickitat fall run king salmon are fresh from the ocean. These hard-fighting fish sometimes take an hour or more to land. The whole month of June is great for the spring chinook run. The peak time for fall chinook is the last week of August through the end of the first week of October. Kings average 18-20 pounds, with large ones up to 50-pounds.
King Salmon Fishing 2:55 YouTube Video.
Silver Salmon: There are two silver runs, the first coming in September. The second run in late-October is when the larger silvers arrive (averaging 6-to 8-pounds and up to 14-pounds). 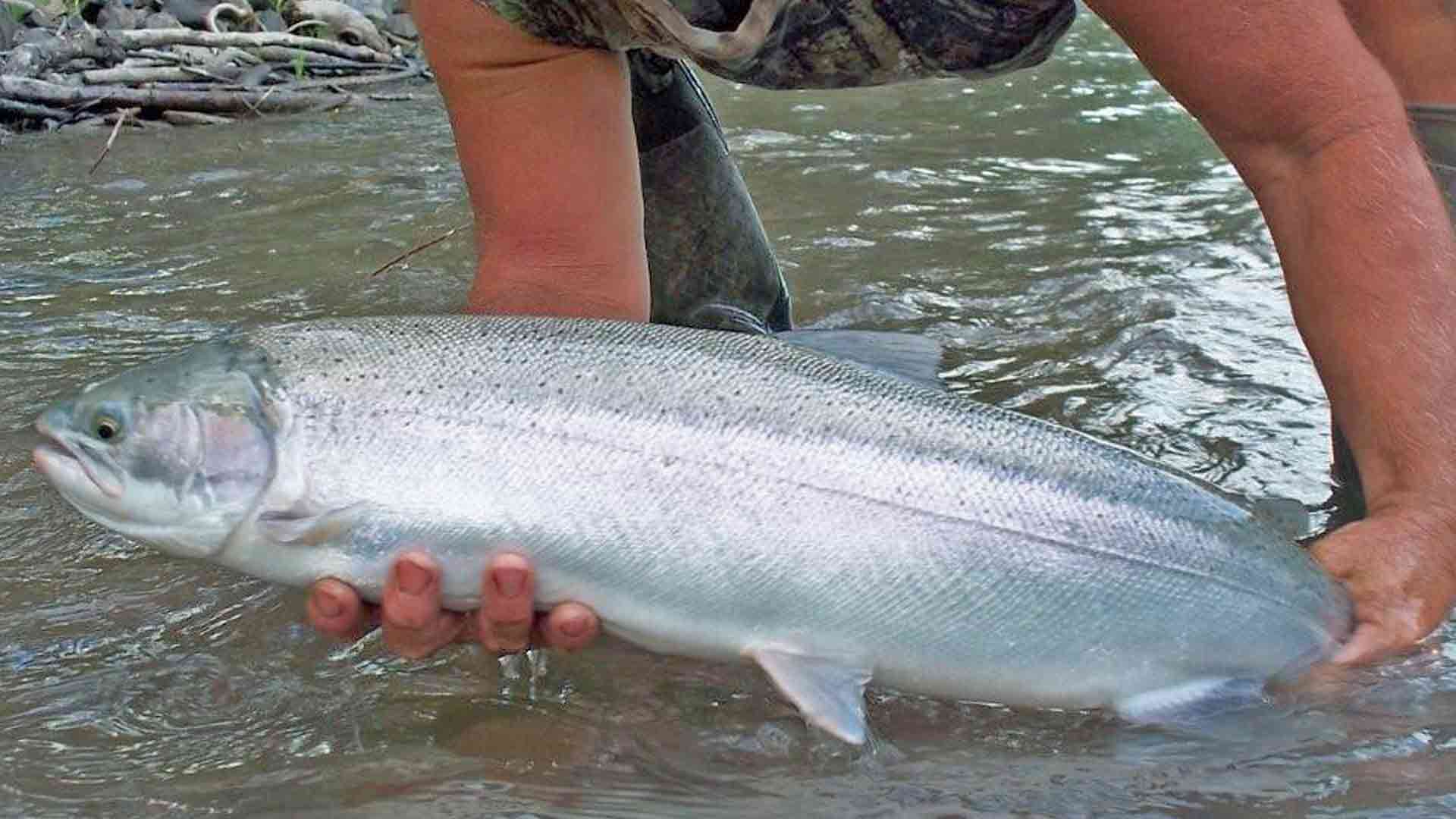 Fishing Season:   runs June 1 through November 30. Drift fish the lower 30-mile section of the Klickitat. You're guided 8 to 10 hours each day, covering 8 to 12-miles of the river.
Boats:  Vaughn or Fish Right drift boats. Each boat has comfortable padded seats with backs and ample legroom. Trips are customized to the size of your group with boats that carry two or four anglers.
Gear:  Conventional rods, reels, and tackle are provided for your use. Fly fishing gear is not provided.
Fishing licenses: are not included in the package.
Spring Turkey Hunts:  From April 15 to May 31. Hunt thousands of acres of turkey habitat using 4WD vehicles or drift boats to travel to many prime locations. If choosing not to stay in their cabins, they would set up a meeting place and time with you. It is essential that you get a good night’s sleep as hunts begin well before daylight. You are allowed two Toms per person. They run two to three hunters per guide, accommodating groups of up to twelve. Special arrangements for larger groups can be made. 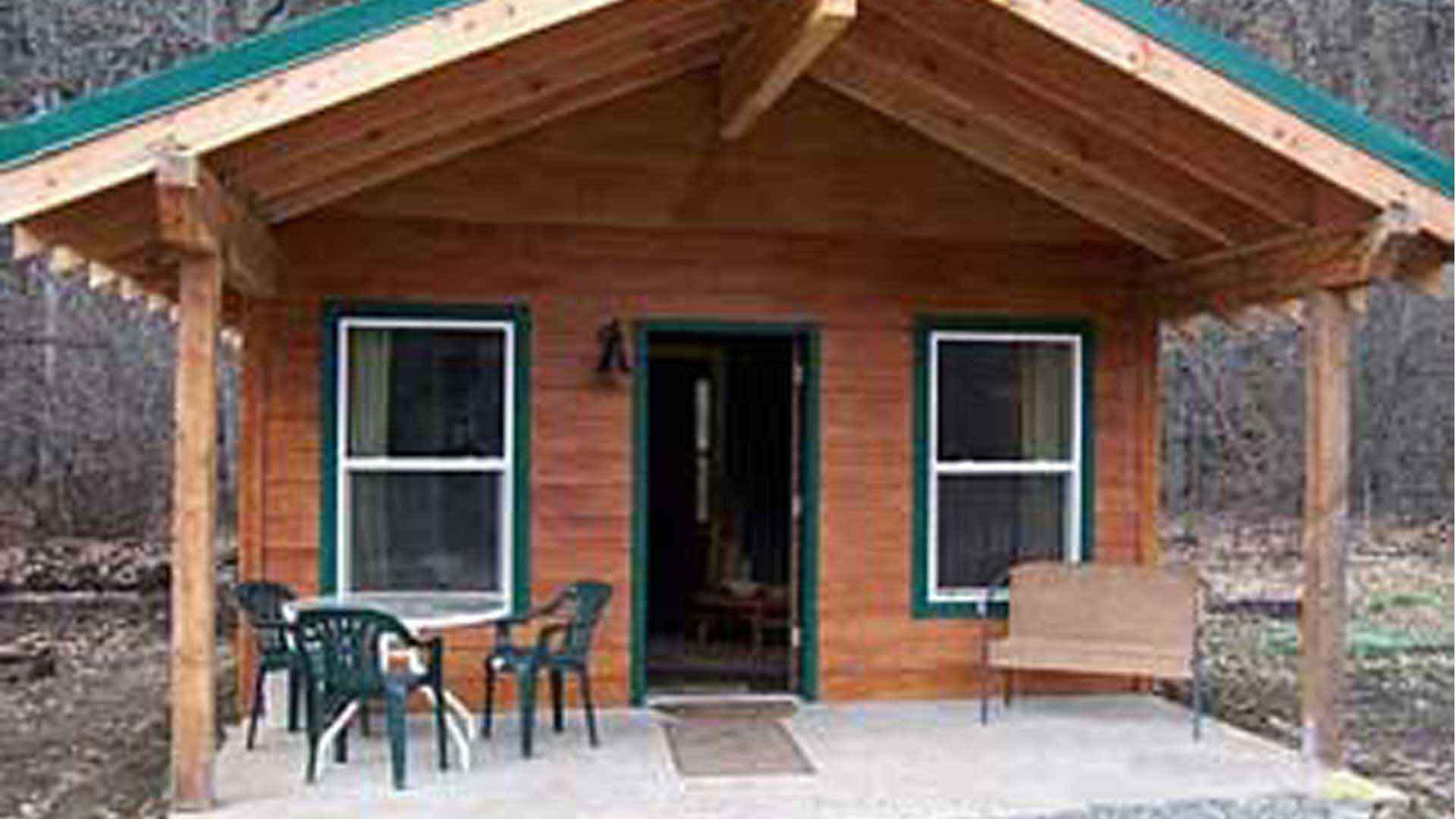 Lodging:  Four cabins sit within a stone's throw of the river and sleep a total of 16 guests. Cabins have free Wi-fi access, single, double, and comfortable queen-sized beds, a living room, a full bath with real flush toilets, and hot showers. The roof overhangs the front porch with deck chairs and a nice sitting area. Best of all, the cabins are just a short walk through the vineyard to the river.
Outdoor Center:  The timber-framed outdoor center is an open space covered area with a full bbq kitchen, including all dishes, pots, pans, silverware, etc. There are ample tables, chairs, and picnic tables to accommodate large groups, and comfy couches and an entertainment center with a large screen TV for videos or movies.
Meals:  Family-style meals, sandwiches for the boat, seasonal fruit pies, or cobbler enjoyed on the deck in the evening.

Getting to the Cabins:

Pound-for-pound steelhead are the hardest-fighting fish in the world. These fish commonly jump three to five feet out of the water repeatedly while screaming 40 to 50 yards of line off your reel. Along with the steelhead, you'll catch fat, acrobatic silvers in the fall. The Klickitat fall-run king salmon are fresh from the ocean. These hard-fighting fish sometimes take an hour or more to land. Klickitat kings average 18 to 20-pounds. Each year they take in a number of fish weighing over 40-pounds. Plus, there's always a chance for a 60-pounder.

Please call us for availability and rates.

A free call in the US and Canada.

Lodging, meals, guided fishing, use of conventional fishing gear (rods, reels, and tackle), and shuttle to the launch site.

From April 15 to May 31, hunt thousands of acres of turkey habitat using 4WD vehicles or drift boats to travel to many prime locations. Two to three hunters per guide, accommodating groups of up to twelve. Larger groups can be accommodated. Spring Turkey Hunt :37 video.
Please call us for availability and rates.

Lodging, meals, guided hunting, and shuttle to the hunting grounds. 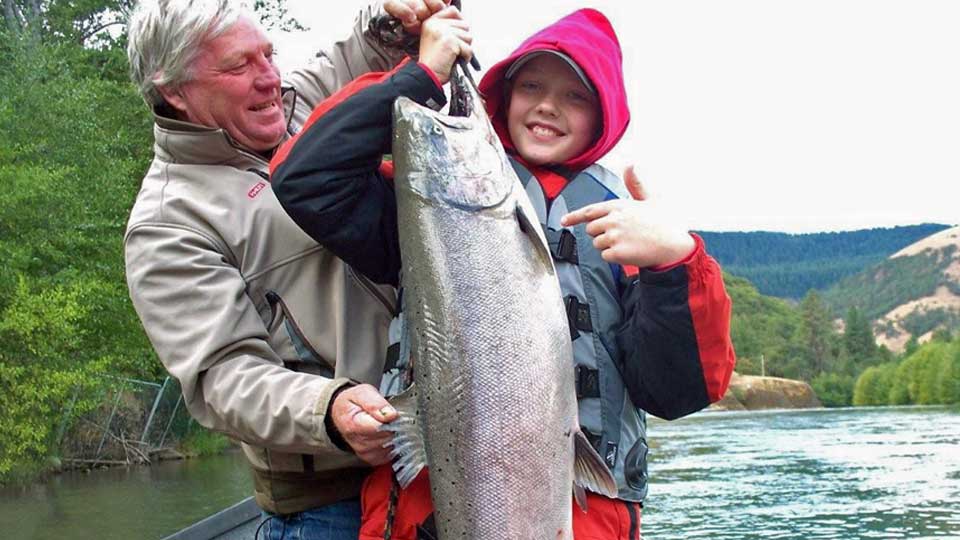 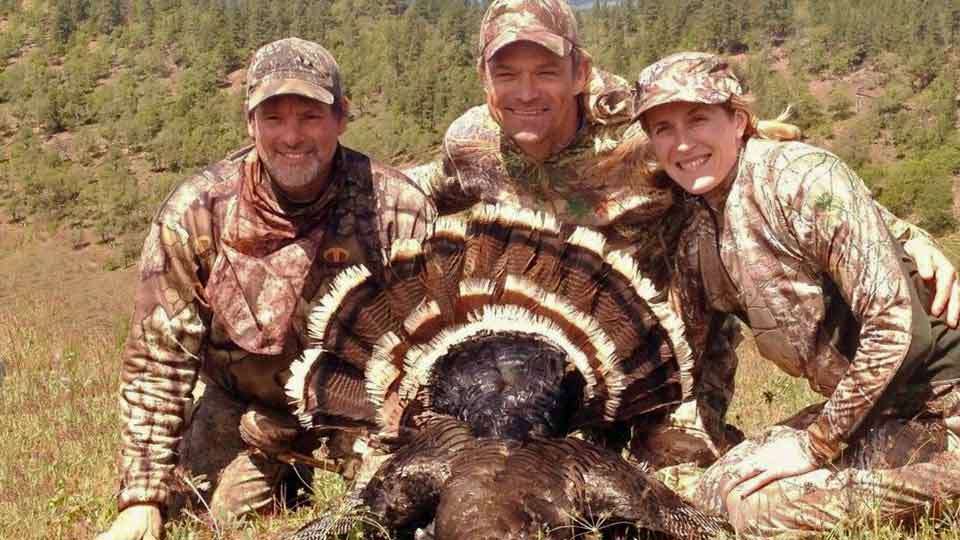 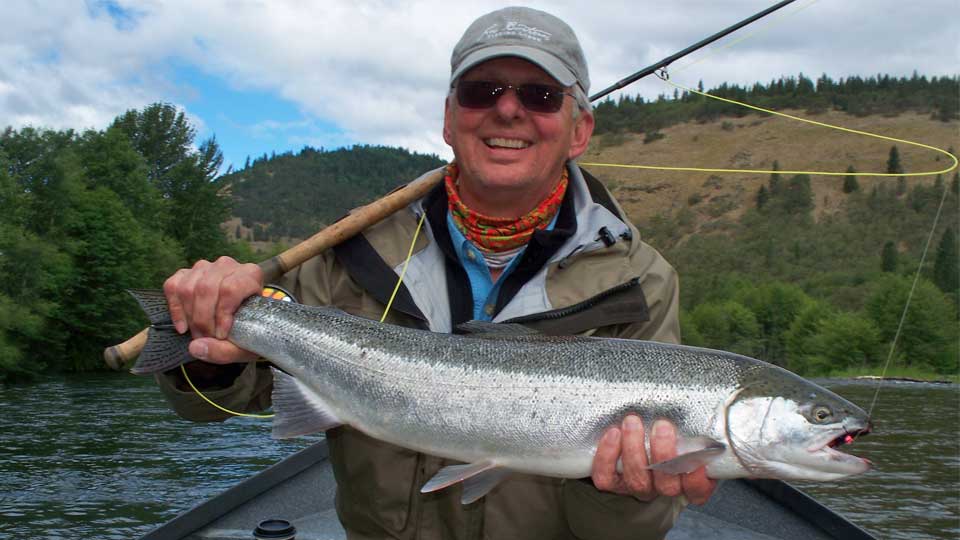 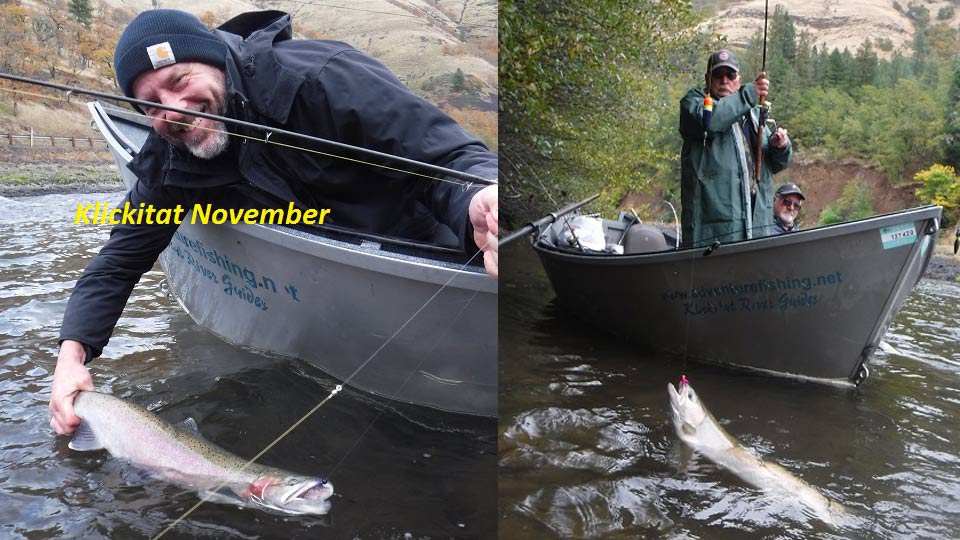 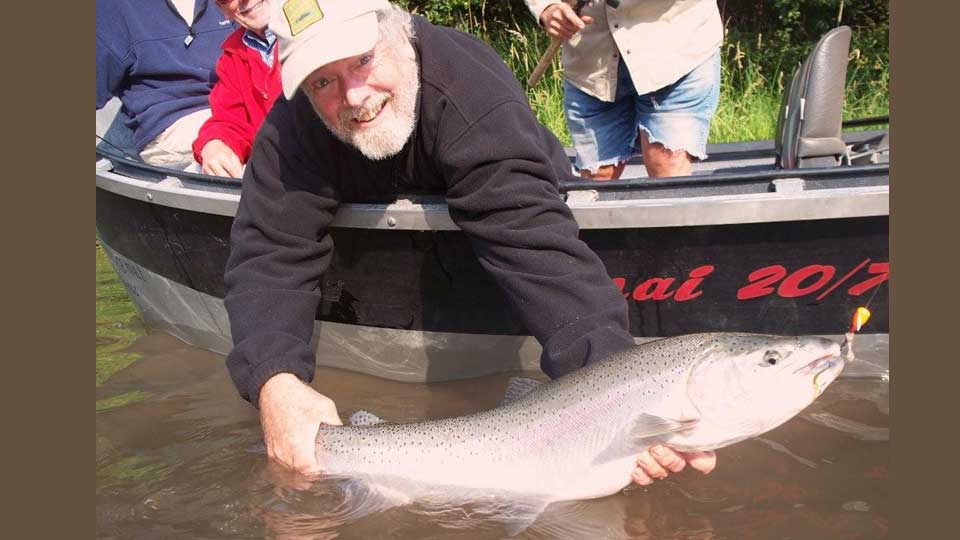 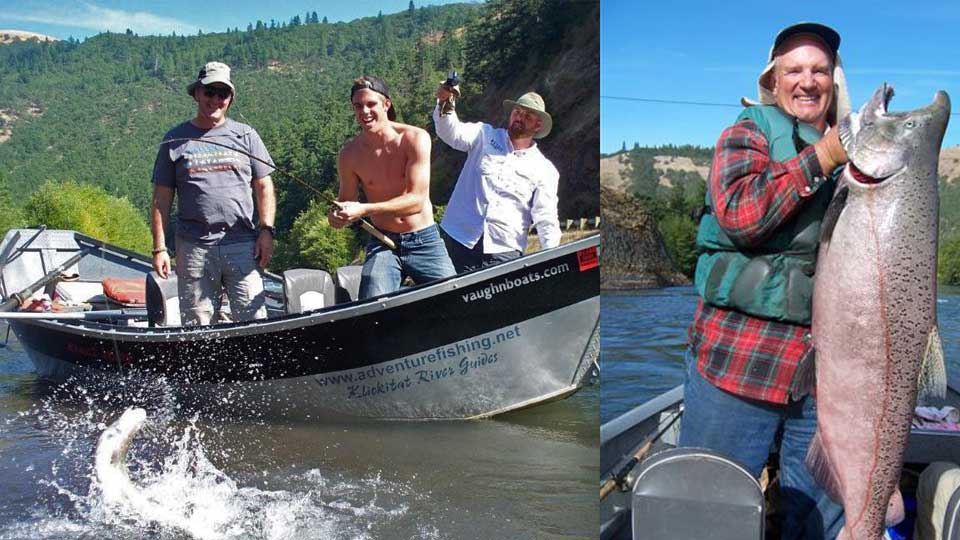 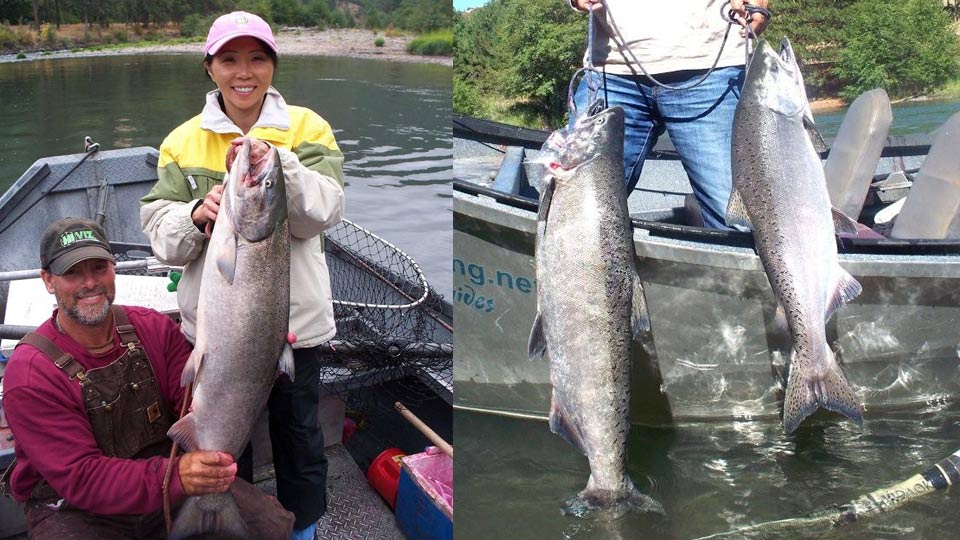 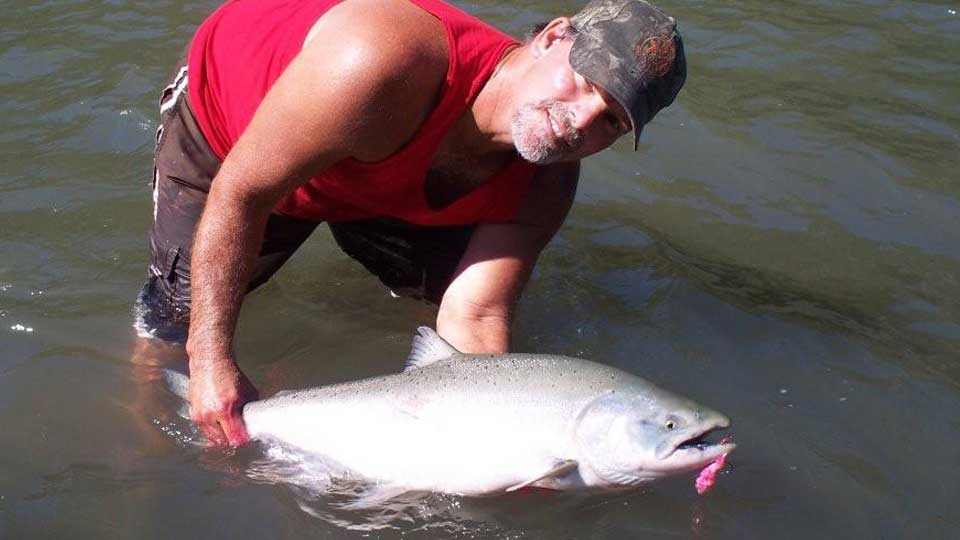 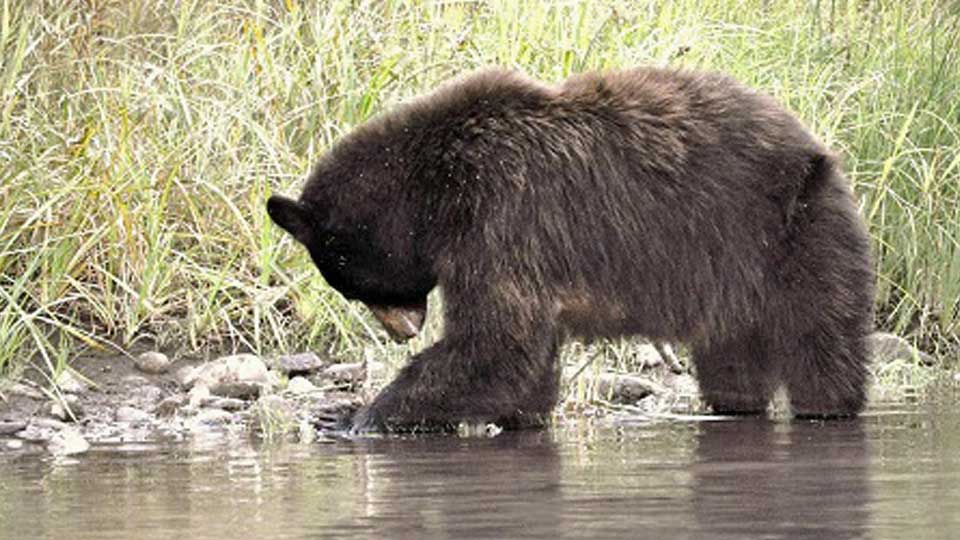