Kamchatka opened up to Western travelers in 1992, and is known as the mother of all wilderness fly fishing regions. The Kamchatka Peninsula is located on the far eastern side of Russia. It lies between the Sea of Okhotsk and the Pacific Ocean. Over the course of five days, you'll float and fly fish 48 river miles for wild native rainbow trout. This ancient strain of rainbows average two feet long and often reach 27-30-inches in size. 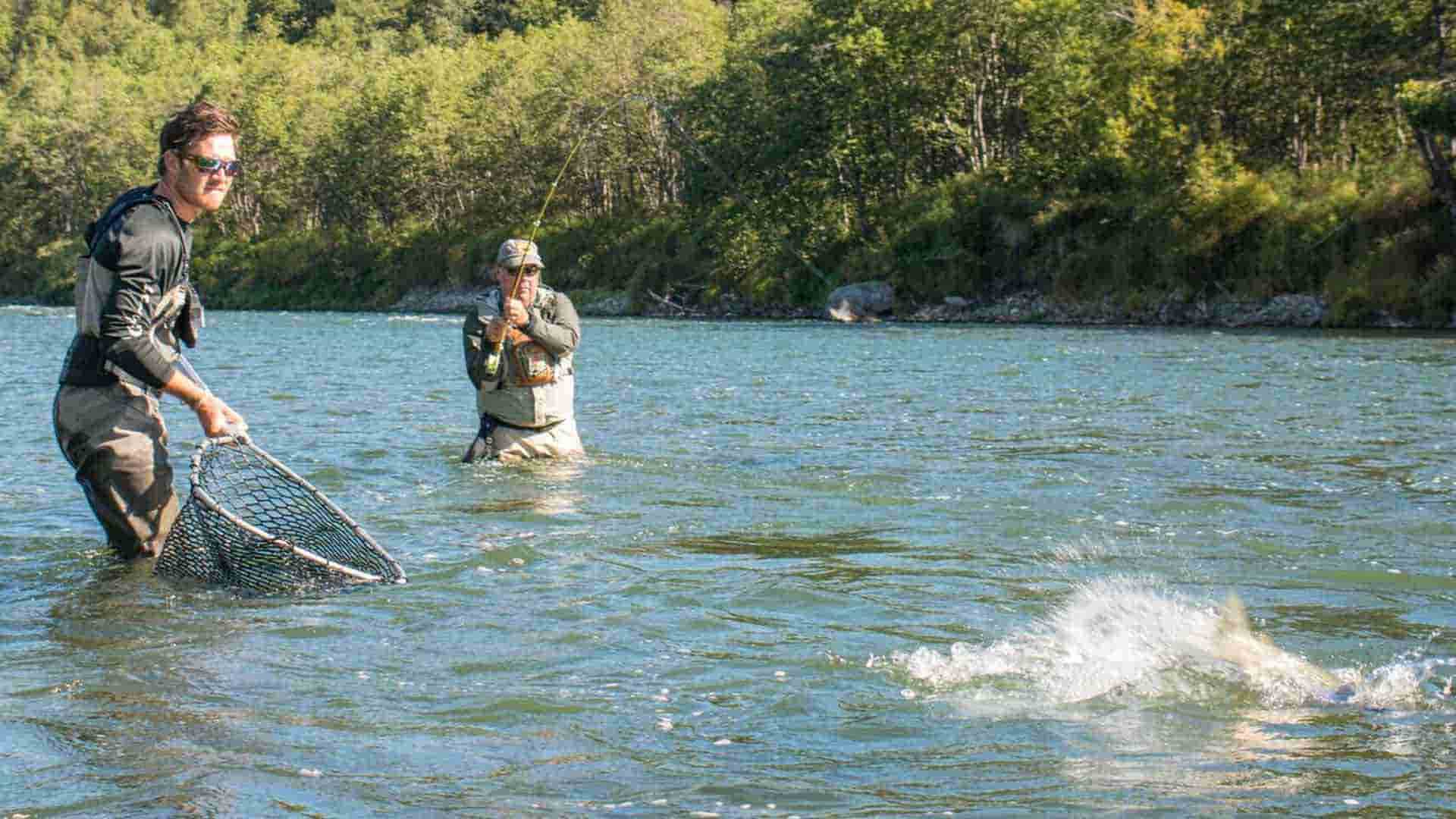 The Zhupanova River is a rugged freestone stream, with large slick boulders and fast currents. The Zhupanova is un-like any other river in the world, and it’s monstrous, ferocious rainbow trout and super kundzha don’t act like the trout you may be used to catching back home. They do sometimes slurp the occasional mayfly or caddis, but for the most part they are aggressive predators who feed on meat: mice, baitfish, and the flesh of dead salmon. You will do a lot of streamer fishing on the Zhupanova.
While not necessary, spey rods can be an advantage on the Zhupanova River, offering access to water impossible to fish with a single-handed rod.
You won’t fish mice as often at Zhupanova as on most other rivers in Kamchatka, but there are certain sections of the river where the mouse is the way to go. Kamchatka rainbows are NOT leader shy. The general rule is to use very heavy leaders and tippet so that if you snag your fly in the bushes—as is common when fishing a mouse along edge structure—you can pull the bushes out rather than break your fly off.
Studded Boots: are strongly recommended! Not only do the studs keep you upright on the river, lots of camps have steps that can get slick and studs will help on the walk to and from camp.
Always use barbless hooks, and proper release methods. The Kamchatka fishery is where anglers pursue large rainbows. Anglers should NOT expect obscene numbers of rainbows each day. If you're looking for a fishing trip for numbers, you'll want to look at some of our Alaska packages, such as Aniak River Lodge.
Guides:  The crew employs a guide rotation system, so each group of two anglers spends two days with each guide. The staff consists of one Western Guide and two seasoned Russian guides. Angling boats are organized by ‘leap-frogging’ each other, with the effect that everyone casts to un-fished water all week long.
Group size:  Each expedition is limited to six anglers.
Rafts:  Two anglers per raft and guide. You’ll move between camps via inflatable Mnev or Achilles rafts. The rafts are used solely for transportation, with all fishing done wading on foot.
Fishing Equipment:  is not provided. A comprehensive gear and tackle list is provided in our confirmation packet.
Fishing License:  is not included in the package. There is a US $100.00 per week fishing license for the Zhupanova. 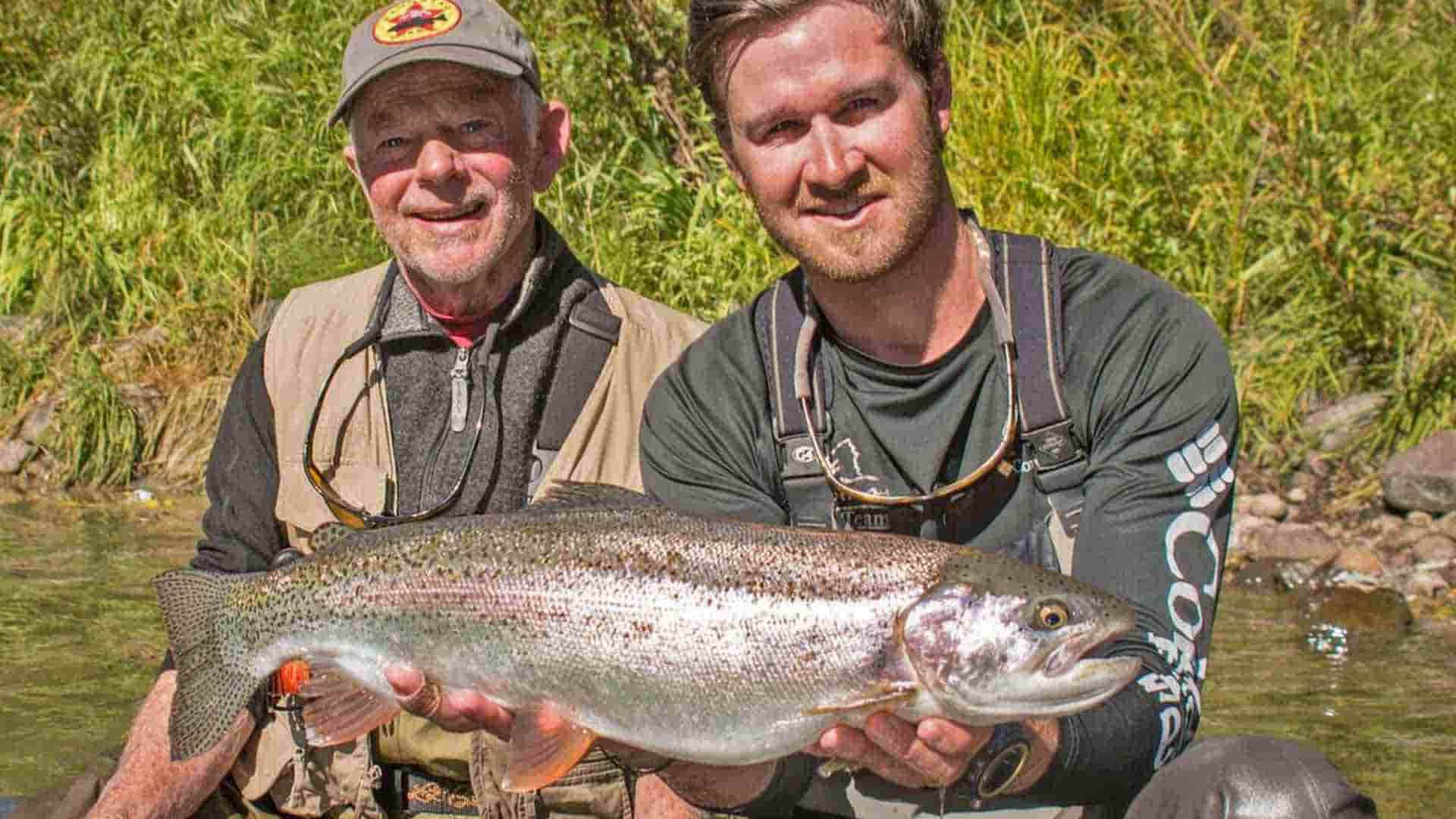 The Upper Zhupanova season runs from mid-July through September.
July:  This is the warmest month of the year in Kamchatka and typically has the most reliable weather, with daytime temperatures between 60 and 80 degrees. There are no salmon in the river at this time, but sea-run dolly varden do show up toward the end of the month. By the last week of July/early August, the famous "Super Kundzha," a sea-run char species found only in the Zhupanova River, begin to pour in from the sea.
August:  Chum and sockeye salmon enter the river. Rainbows are targeted with mouse and streamer flies throughout the month. The first two weeks of August, too, are the peak time to intercept the sea-run "super kundzha."
September:  Fall begins in Kamchatka. It can be chilly, in the 50-degree range. Sunny weather makes for beautiful fishing days but brings with it frosty nights. It is also the most photogenic time of year to be amid the sub-arctic taiga and tundra foliage as it turns to blazing yellows, reds, and oranges with a backdrop of snow-capped volcanoes. Trout are taken with surface skaters and with "big nasty" leech and baitfish patterns. The latter fished on a sink-tip line, become more important as water temperatures drop.
From early-August through October:  The rare super kundzha char migrate up the river from the Bering Sea. Kundzha grows up to 20 pounds, aggressively take flies, and put up a mighty battle on single and two-handed fly rods. Dollies are also present, averaging 12-18", and readily take dry flies. 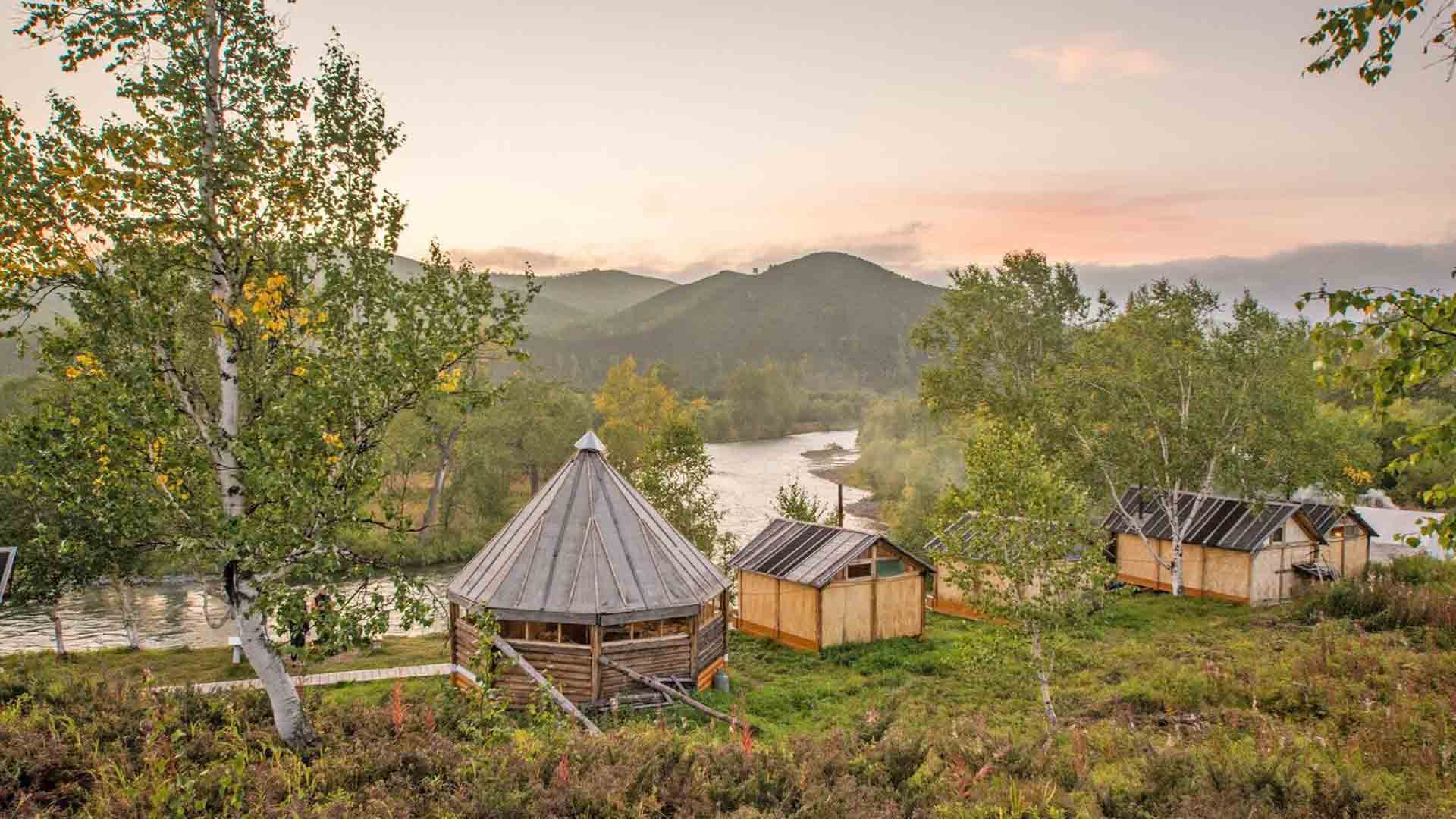 There are six permanent-structure camps on the Zhupanova Float Trip that are spread 6-8 river miles apart from one another. Each camp is identical in infrastructure. Two anglers share a small wooden cabin or a high-tech, weatherproof, double-walled cabin-style tent, similar to the WeatherPort tents used in many Alaskan camps. Each cabin has wooden floors, a wood stove for heat (usually only needed in the fall), a shower/wash room, bed frames and mattresses. You must bring a sleeping bag and bath towel, and headlamp for this trip. It is also a good idea to pack a lightweight fitted sheet for the bunks and mattresses. There are two, clean flush-toilet outhouses per camp, as well as multiple hot water shower facilities. The Kamchatka-experience is much more rustic than, say, an Alaska fly-out lodge. The focus is on the fishing, yet the accommodations are comfortable.
Electricity:  Each camp has power via generator, and there are even plugs in the cabins. The generators will be turned on each evening and occasionally in the morning, and shut off at night. Don’t forget, Russia operates on 220 volt output. You will need the two-pronged outlet adapter, standard for Continental Europe. Most modern cameras, sat phones, laptops, iPods, and CPAP devices will accept the 220-volt output.
Communications:  Each expedition is outfitted with first aid kits, GPS, handheld radios, and a satellite telephone. The phone is only intended for staff and guides to use in case of an emergency. Should you need to call out for emergency reasons, please let the head guide know, and he will arrange for you to use the Sat-Phone at a rate of $3.00 per minute.

Sample Fishing Day:
7:00 a.m.  Tea and instant coffee.
8:00 a.m.  Leisurely breakfast.
9:00 a.m.  On the water - Each two anglers are assigned a guide and a 1-2 mile beat of the river. Float and fish.
2:00 p.m.  All three rafts meet for lunch. The cook has floated ahead of you in the morning and prepared lunch on a gravel bar.
5:00 to 7 p.m.  Boats arrive at that night's camp
8:00 p.m.  Dinner, then campfire with classic Russian toasts to the successes and most dramatic moments of the day. For midnight-sun junkies, most of the camps have high quality home water a stone's throw from the fire pit.

You’ll arrive in Anchorage and stay overnight at a nearby hotel, (not included in the package). The next morning, you’ll board Yakutia Air for a four-hour flight to Petropavlovsk.
For overnights in Petropavlovsk, guests will typically be housed at one of Martha Madsen’s cozy guest houses in Yelisovo, or the Art Hotel near the airport, $60 to $100.00 per night and not included in the package. The outfitter will make the reservations for you.
On Tuesday morning, you'll take about a 80-minute flight in a Russian MI-8 helicopter pass dramatic mountains and towering volcanoes. After about 50 minutes, the helicopter will land on the helipad in front of Zendzur Lodge. Luggage and Zendzur guests will be unloaded. It's a good time to stretch your legs. Then guests continuing on to the Upper Float will load back into the helicopter and fly an additional 25-30 minutes upriver to the upper camp. Once you’ve settled in, the guides will give a detailed orientation and fishing talk, and the guides will help you set up and organize tackle for the week’s fishing. There is no scheduled fishing on this day, but guests often make a few casts in front of the camp and the first fish of the trip is frequently hooked before supper.

A cook and camp assistant travels with the group, preparing hearty and tasty meals. Breakfast feature items such as fried eggs, bacon, pancakes, oatmeal (or “Kasha,” a classic Russian warm cereal). Lunches served streamside consist of fresh meats, cheeses, bread, tomatoes, and cucumbers. Fresh-caught char or salmon may also be served. Dinners usually start with a delicious Russian soup like borsh and ukra or salad, followed by the main course that includes either meat-and-potatoes or fish and pasta. Beer is provided with dinner. Additional beer and vodka available for sale.

All ground and air transportation once in Kamchatka, all food at the camp, accommodations, and guides. (Sodas and assorted juices are provided. For the 2020 season, a modest amount of beer and vodka will be provided in camp by the outfitter (Three 16 oz beers per person per day and the equivalent of a half bottle of vodka per person per week).

• Sunday:  Travel to Anchorage, overnight stay.
• Monday:  Depart from Anchorage at about 7:30 a.m.
• Tuesday:  Four-hour flight to Kamchatka. Helicopter flight to Camp One. After you're settled into your cabins, the guides will give a brief orientation. If you'd like to get in some fishing before dinner, there is some excellent water right in front of camp.
• Wednesday - Sunday:
Guided fishing from about 9 a.m. to 6:00 p.m.
• Monday:  Depart midday. Flight departs from PKC in the evening. Arrive at the airport in Anchorage in the a.m. Spend time in Alaska, or continue home. 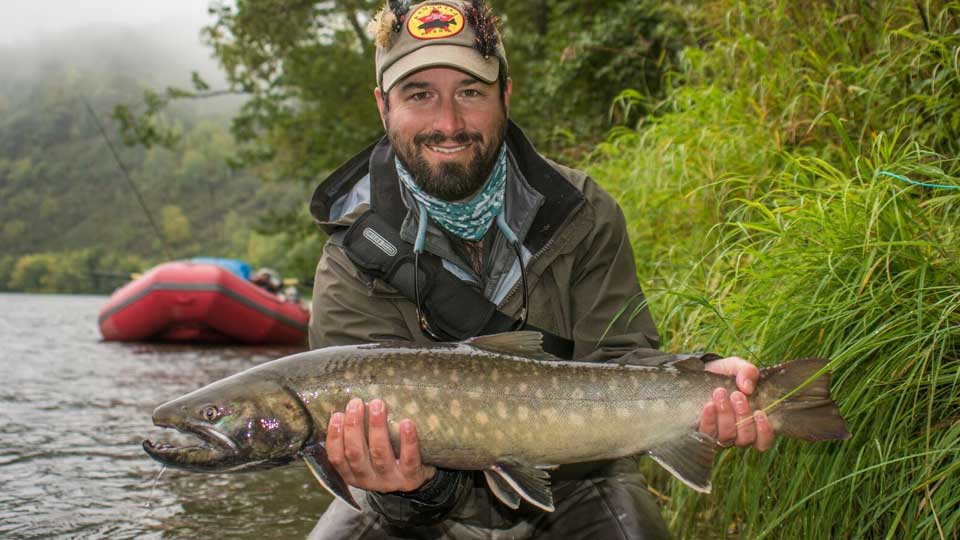 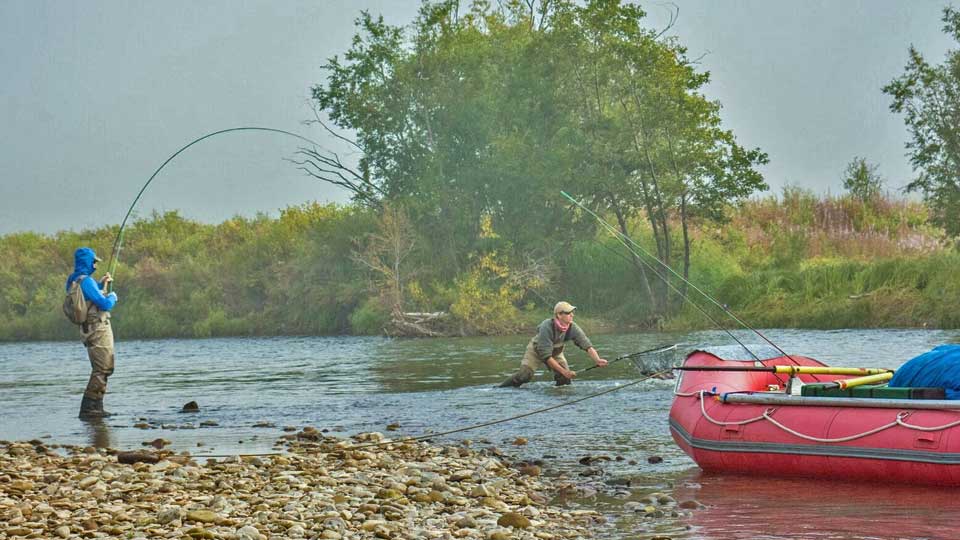 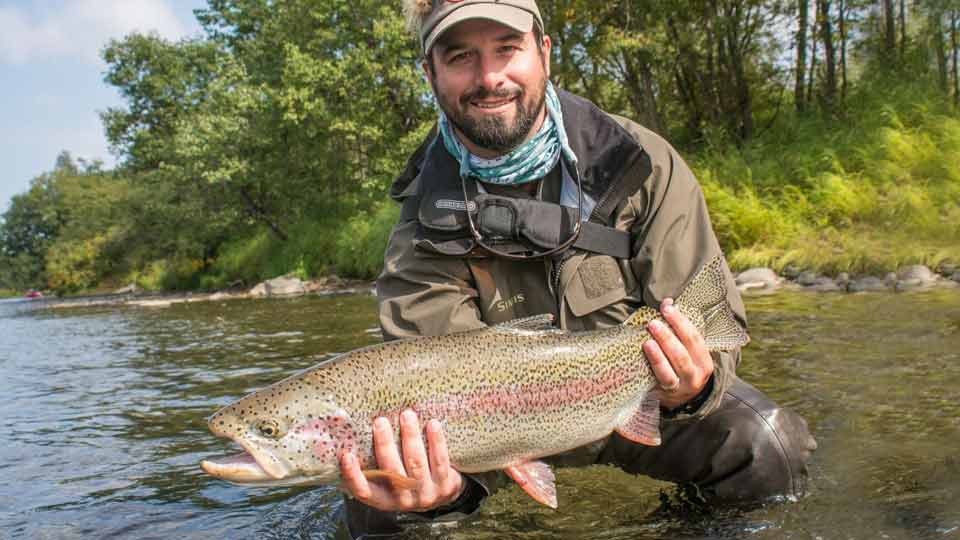 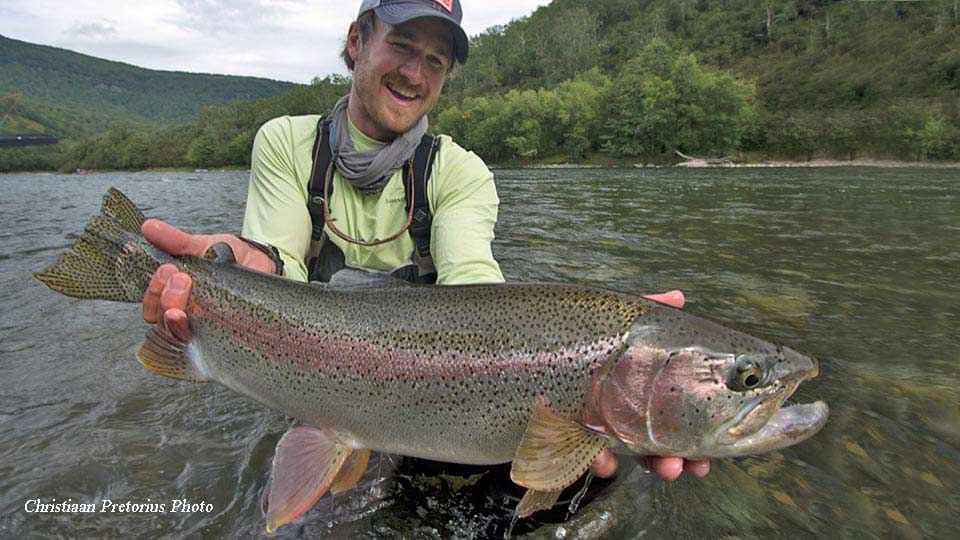 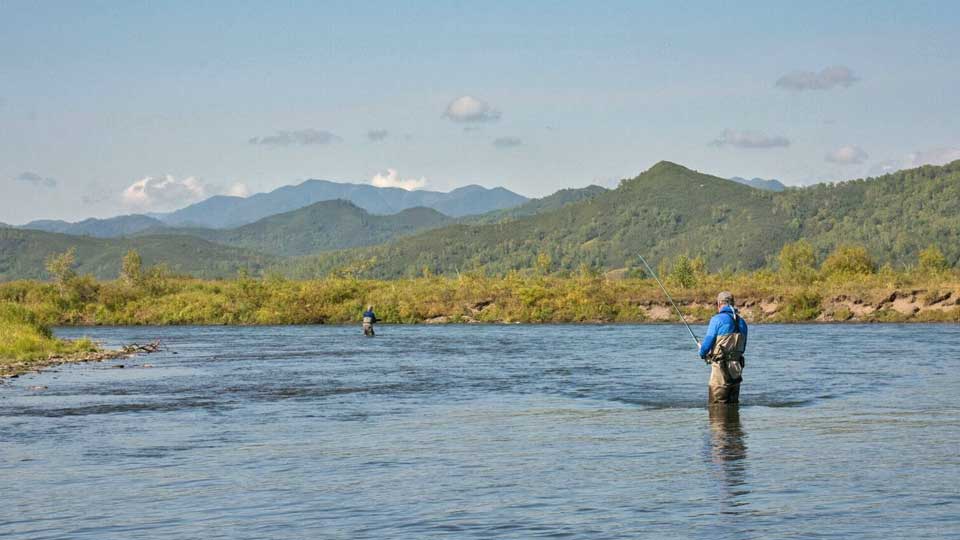